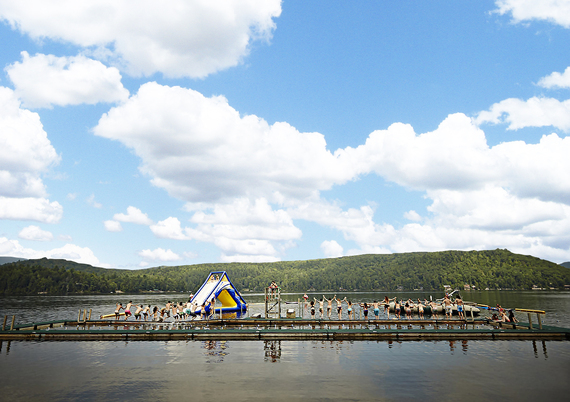 Summer has always been my season. As a July baby, it's the time of year when I feel most charged and alive. There's the allure of the beach where I grew up and my pink beach cruiser that's still parked in the garage -- but carefree summers spent at sleepaway camp still evoke my best memories. I have fond recollections of raising the flag on my birthday, raiding the boys' bunks as a junior camper and getting caught time and again sunbathing on the blacktop instead of participating in tennis clinics. I mingled at the canteen, competed fiercely in Color War, and watched the year burn on the last night. Those blissful summers spent in sweaty, buggy bunks with the towels hanging on the line outside and posters from Tiger Beat plastered on my wall were some of the best of my life. And as the car pulled away on the last day of my final summer, it seemed like my camp days were behind me forever.

I am grateful to have been wrong.

Last August, I was invited to join two of my best friends with whom I went to camp as a kid for a weekend at a sleepaway camp. One of their friends had decided to rent out a camp in an effort to bring his group together. His crew was perpetually busy and tied up in their own obligations -- weddings, share houses, family gatherings upstate, exotic vacations, etc. -- and so it was clear that an outlandish idea like this would fit the bill. His plan worked, and over Labor Day weekend I along with 86 others ditched the standard summer scene in favor of a nostalgic return. Camp Southwoods became Camp No Counselors.

As soon as we boarded the buses I knew I was in for a magical ride. One fellow camper handed out star-shaped sunglasses, another passed around glow sticks and neon necklaces, and then there were the candy bracelets and bottles of spiked bug juice. With the music blasting, we danced our way to the Adirondacks. Upon arrival, we headed to our bunks, dropped off our bags, made our beds, filled our cubbies, and gathered around a campfire for scotch and s'mores.

The next morning there were mimosas waiting for us in the mess hall. After breakfast we slid into the lake and catapulted into the water off an inflatable blob. I spent hours with my feet dangling off the dock, breathing in the fresh air while others played dodgeball and tried their hand at archery. We shared story time beneath the stars, jacks tournaments on the bunk porch, apache relays, and slip n' slide showdowns. Through it all, a youthful exuberance prevailed. We were all there to have a good time, free from judgment and the trappings of everyday life. We were there to let loose and be ourselves.

And those who gathered were quite an impressive bunch. The gorgeous model-type in the would-be intimidating "You cant sit with us" t-shirt was not only the friendliest person at camp, but she is also helping to bring much needed medical assistance to Ethiopia. She was sharing a bunk with the guy who is transforming education around the globe, (at camp his talent was shaving people's heads). There were the world class DJs who usually spin at major festivals and Hollywood bashes; here they used their talents to bring the house down at a Wet Hot American Summer-themed bash. A digital graphic designer instructed a group on how to make friendship bracelets while an inspiring yogi led others in sun salutations by the waterfront. The designated photographer, who normally shoots for ad campaigns and media outlets, captured our laughter as Division 1 athletes and far less coordinated types competed in tug of war, three-legged races, and kickball.

The American Camping Association has a slogan, "Camp Gives Kids a World of Good," and I've come to realize that it has an equally transformative impact on adults. Though I spent eight years of my childhood and teen years as a bona fide camper, it was such a unique experience to return as a "grownup." I now had just the right amount of perspective and adult responsibility to appreciate what makes camp so special, and my 86 new friends seemed to agree. What started as a weekend gathering for an extended group of acquaintances has now, for many of us, become a way of life.

Sure, there's the Full Moon party in Koh Phangan, Yacht Week in Croatia, desert dancing at Burning Man, and the allure of Ibiza, but there is nothing like the simplicity of camp. Given the choice between a luxurious European vacation or a weekend spent swimming in the lake, singing around a campfire, and dancing beneath the twinkling stars, I'd choose the latter (almost) every time. Being in the midst of nature, free from pretension, daily stressors, and technology, is an opportunity not often afforded to us.

So this Labor Day I will once again board the buses for a carefree weekend at Camp No Counselors. And come September 19th, I will be in Venice, CA, hitching a ride to Lake Hughes where I will join a collective of creative and fun-loving West Coasters for their first CNC experience. As camp continues to expand around the world, kids-at-heart will have the opportunity to share in a unique community where the only objective is to have a good time. Communal bathrooms, shower shoes, and mosquitos aside, for my fellow bunkmates and I, camp is our quirky utopia.