Of late, meaning the last few years, coming to myself in the dark woods in the middle of my life, I read autobiographies of interesting women. They are my guides as I navigate a way that is lost only because it isn’t found yet—because I haven’t lived it. I read to see how these courageous souls made their way through the emptinesses and fullnesses that punctuate our journeys as mothers, wives, and people invested in their own careers.

I read because our culture is obsessed with youth and life and denounces age and wisdom and death—as if pretending that change doesn’t happen will stave it off—and yet everyday I am confronted with impermanence. Our zeitgeist may not have the bandwidth to encompass the true breadth of the human condition, but a strong woman writing her story does.

This brings me to Lee Grant’s absorbing, thought-provoking memoir, “I Said Yes to Everything” ( Grant, Lee. I Said Yes to Everything: A Memoir. New York: Plume, 2014. Print). One of the understandings I have gleaned in this most recent decade of my life is that people are almost always talking about themselves. That is, more than 99% of the time, when people speak, even when they think they’re describing or analyzing someone or something else, they’re really communicating an idea about themselves. It’s a relief to read a memoir because the usual facade is gone and the narrator is openly revealing herself.

Lee Grant does this beautifully. From her time as a much-loved tot, the only child of adoring parents who separated briefly when she was young, through her twelve years blacklisted by the McCarthy witch hunt regime, through her achievements as an actress, to the most recent years dependent on a pacemaker to keep her going, Grant exposes herself with vulnerability, grace, and intelligence. The valor of her vulnerability takes the memoir out of the realm of simple exposition and into that finer, realer plane of the conveyance of authentic human truth.

As a Jewish child, Grant, born Lyova Haskell Rosenthal, endured some harsh experiences of anti-Semitism, both on a transatlantic ocean liner and in New York. She was raised by parents who loved and supported her, yet she writes of the other side of that gift: the need to protect her parents and to live up to their unlimited dreams for her.

Grant tells movingly of her desolate first marriage to an intellectual who needed an au pair, not an equal life partner. She tells of desperately trying to please him and to earn his attention and respect while he diminished her. It happens this way to many women, even talented ones: the bad first marriage that precedes an awakening.

She writes well of her anger, sadness, and fear as she moved forward in her life, and she describes with great poignancy what it was like to lose the bond with the two stepsons that she raised for more than ten years.

Grant’s most powerful passages concern her years as a blacklisted actress. Her first husband was a Communist and an idealist; as is often the case, she the wife adopted his ideals, at least enough to assuage him. Then she was tarred and feathered for those ideals when people she knew and trusted named names to the House Un-American Activities Committee. She was unable to work openly in movies or television for twelve years following that denouncement.

The experience stoked within her the desires to live fully, to work constantly, and to fight injustice.  She threw herself into acting and reaped the highest accolades: award nominations, an Oscar, an Obie, Emmys.

Along the way, Grant seems to have seized every adventure offered to her, displaying a wanton appetite for life at odds with her sometimes crippling stage fright and insecurity over her age. I was intrigued by the dissonance and heartened by it. I’ve long held that perfectionism is a virulent form of self-hatred. Grant’s openness about her frailties demonstrates the bedrock of self love that must have enabled her to endure the cruel devastation of being blacklisted when many McCarthy victims didn’t survive.

There’s plenty of name-dropping, the hard-partying 1970s being an important era in Grant’s life—voyeurs will be satisfied. Those sections are less interesting to me than her exploration of her own maturation into a director and documentary maker concerned with matters of social justice, like the shocking unfairness of the divorce court system in Houston, Texas toward women, the lives of cross-dressers and transsexuals, the misogynistic practices of banking institutions (which came under some revision after her documentary), and the ruinous disruption of the middle class by corporate greed.

I don’t agree with all of Grant’s politics, but I applaud her passion for telling these stories. As a person on her own journey, I appreciate Grant’s growth and her widening spheres of interest. This memoir is about self-actualization, and while there is a lot of Hollywood ego in it, it transcends the little self of the ego. There’s a light shining in it that shows a way, one way, through the woods and up the hill. 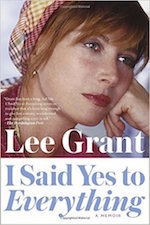