"Fidel promised that the Revolution was for us, for campesinos, rural farmers like me," sighed Sirley Avila, a slender 56-year-old former Cuban community activist, who has lived under Castro leadership her whole life. "Then, look," she said, "this is what happened." From her wheelchair, she extended the stump of her left arm, where her wrist and hand had been amputated. Lifting her trouser-legs, she revealed scars on her knees. Then, defiantly, she raised her remaining hand in the Cuban dissident "L" sign for Libertad, Liberty.

I met Avila on April 2 at Miami's convention center, where I was participating in Amnesty International (AI) USA's annual conference. She was accompanied by John Suarez of the Cuban Democratic Directorate. Avila had come to Miami for rehabilitation arranged by the Directorate. My own past professional experience with rehab services has made me hopeful that she can regain the ability to walk and also learn to use a left-hand prosthesis.

Back in June 2015, at a book talk at a New York City public library, an audience member had asked me about Sirley Avila, the first time I'd ever heard her name. She had been attacked on May 24. I'd tried to find out more, but reliable information from Cuba is not easy to obtain. Now, less than one year later, here she was, sitting with me and Gabriele Stein, a fellow human rights volunteer from Germany, telling us her story in Spanish, which I translated for Gabriele.

Avila told us she lives alone on a little farm with fruit trees located outside Las Tunas, a small city in central-eastern Cuba. From 2005 to 2013, she was elected three times by her community as an unpaid delegate to Poder Popular, an official legislative body, half of whose members are elected locally. In 2010, the region's rural school was closed because it had only a few pupils. Avila protested that meant children had to walk too far, up to 12 km., but the school remained closed, although she was still reelected to her position. After continually being thwarted on the school issue, two years after its closing, on Sept. 8, 2012, Avila took a fateful step, speaking openly about her frustrations on Radio Martí. She was immediately labeled a mercenary, but no charges were brought against her and the community continued its support. She then joined UNPACU, Unión Patriótica de Cuba, an opposition group, and participated in hunger strikes in solidarity with two political prisoners, Luis Enrique Lozada and Angel Yunier, hunger strikes each lasting more than three weeks.

In December 2013, after a few days' absence to tend to her elderly mother with Parkinson's, Avila returned home to find her dogs and other animals all dead, apparently poisoned. The interior of her home had also been vandalized, with her bed set on fire and the cords cut to her refrigerator and television set with their motors short-circuited and burned out. (In Cuba, appliances are very expensive and hard to replace.) Then, she found her well had been poisoned after hundreds of pounds of yucca had been dumped inside and had decomposed. It took her a full two months with the help of sympathetic neighbors to remove it and restore the water quality. All that proved an ominous warning; the worst was yet to come.

Avila had dared to report the damage to her home and property to the police, accusing state security of being behind the attacks against her. Meanwhile, her neighbors remained steadfastly loyal, asking her to continue to represent them, but, instead, her district was eliminated and apportioned among other districts. In February 2014, when the long-closed school was finally reopened, community members clamored to have her reinstated and the law allowed for a protest by 25% of voters. She went to Havana and met with activist Elizardo Sánchez's brother, Gerardo, to discuss this possibility.

One evening, after Avila had returned home, a young woman friend, Yunisledy López, called to warn her about plans to kill her, but, soon after, López herself was found murdered.

On May 24, 2015, a couple Avila had hired to help her out on the farm, Osmany Carrión and Mariela Hidalgo, suddenly turned on her and viciously assaulted her. Wielding a machete, Carrión slashed her shoulder, collarbone, and knees and, as she raised her arm to shield her head from his blows, he sliced off her left wrist and hand. His wife then threw the severed hand into the pigsty, contaminating it so it could not be reattached. After that, a judicial hearing was held on the attack, but Avila was not allowed to attend or to submit testimony. She doesn't know what, if anything, happened to Carrión, but she was told that in court, he had accused her of trying to recruit him for dissidence. In September, the Inter-American Commission on Human Rights supported Avila's complaint that she was in a "serious and urgent situation."

Surely if the Cuban government did not condone or facilitate the attacks on Avila, it had a duty to protect her -- the universal duty of any government toward citizens acting non-violently and within the law. Yet, it is no secret that brutal actos de repudio, acts of repudiation, are officially encouraged. Some Cubans seem to genuinely relish such invitations to beat up fellow citizens, while others claim only to be reluctantly following orders. At the 2011 party congress (another has just concluded), President Raúl Castro issued a call for the expression of righteous wrath against traitors and mercenaries: "It is necessary to make clear that we will never deny our people the right to defend their Revolution. The defense of the independence, of the conquests of socialism, and of our streets and plazas will still be the first duty of every Cuban patriot."

Avila arranged her own trip to Miami, tricking authorities who had blocked her efforts by getting two round-trip flights for herself and her son from Las Tunas to Havana, but having her son return home alone while she boarded a flight to Miami instead. She had already obtained a U.S. visa. She plans to stay in Miami for three months undergoing treatment, fully intending to return home again to her farm, her aging mother, and her two sons, also to rejoin Cuba's peaceful struggle for free expression and association. "We Cubans deserve personal liberty, just like all other human beings," she says. "Yes, I'm still afraid, but unless we are willing to put heart and body on the line, nothing will change for us or for our children. My problem has been that I still enjoyed community support despite all the government's efforts against me and they just couldn't tolerate that." 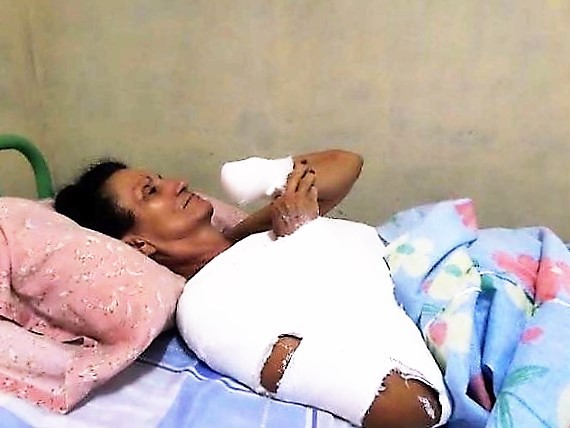 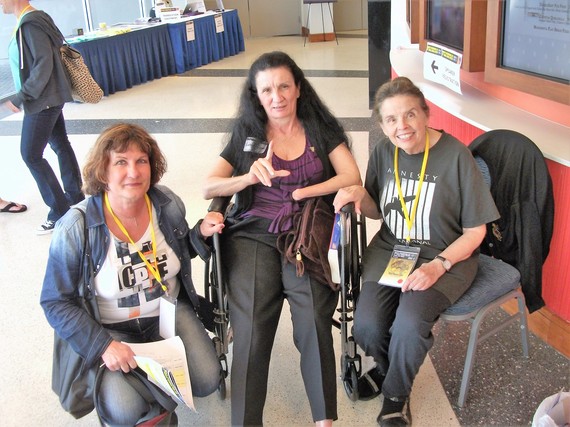 Sirley Avila showing the "L" sign for "Liberty," with Gabriele Stein and Barbara Joe in Miami on April 2, 2016