"Nature is still our mother, but she's grown older and less independent. We've grown more self-reliant, and as a result we're beginning to redefine our relationship to her. We still need and cling to her ..." (Diane Ackerman, The Human Age: The World Shaped By Us, p. 308)

Rewilding and fostering compassion for animals in the anthropocene

It seems like December is a month for deep reflection on the past, present, and future. When I mention this to people they, too, seem to move in this direction, and it seems only natural to do so as many measure time by the passing of years. Like numerous others, I'm astounded to continually read and learn about all forms of violence, particularly human-human violence, but also about humans abusing nonhuman animals (animals) in the most reprehensible ways. It seems as if TV, radio, internet, and print news have nothing more to report other than this or that killing internationally, nationally, and locally. I've kept informal tabs on this and my estimate is that around 60-70% of news is about violence. This does not bode well for the future. And, as I was writing this essay, I received an essay written by the ecologist, Michael Tobias, called "Combating the Darkness: Is There Any Hope for Biological, Multi-Species Redemption Amid Such Data?", a review of an outstanding book titled The Annihilation of Nature: Human Extinction of Birds and Mammals by Gerardo Ceballos, Anne Ehrlich, and Paul Ehrlich.

The ethology of rewilding and biophilia

Given my interests in the fascinating worlds of animals -- their amazing cognitive, emotional, and moral lives -- and in the growing fields of conservation psychology, anthrozoology (the study of human-animal relationships), cognitive ethology (the study of animal minds), and compassionate conservation, I often wonder how we can use our innate drive to connect with other nature, called biophilia, to overcome the continual barrage of gloom and doom to which we are exposed. Conservation psychologists are continually showing how connecting to nature makes individuals feel better about themselves and others.

We truly are biophiliacs at heart. Diane Ackerman aptly writes, "One of the paradoxes of our age is that we're urban primates who are still adapted to wilderness, which we long for, and need, at the same time that we're destroying, building over, and farming all that's wild." (The Human Age, p. 73) She notes the importance of what renowned ecologist Michael Rosenzweig calls "reconciliation ecology," that stresses harmonious coexistence with nature. Reconciliation ecology entails "undoing the unwilding" that comes from sitting in classrooms, the media, and getting lost in busyness. 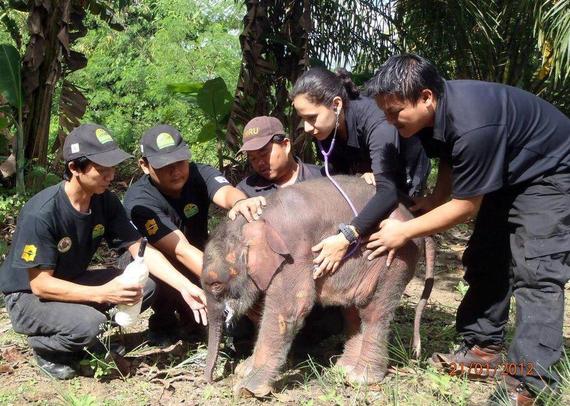 In Rewilding Our Hearts: Building Pathways of Compassion and Coexistence I've argued that by personally rewilding, by undoing the unwilding and by reconnecting and becoming re-enchanted with nature including other animals, we can overcome negativity and see the world in more positive ways. What I call "the ethology of rewilding" entails focusing on what we know about who other animals truly are and using this information to come to a deeper appreciation of the similarities and differences among nonhuman animals and between nonhuman and human animals. Compassionate conservation mandates that we focus on individuals, and that the life of each and every individual matters. It also stresses that all stakeholders, human and nonhuman, count.

What we now clearly know is that humans and other animals share a number of cognitive and emotional traits, and that differences can be explained when we pay attention to what different animals have to do to be "card-carrying members of their species." The differences are neither "good" or "better" nor "bad" or "worse," but rather markers that need to be studied and appreciated. We don't need to embellish other animals because when we do we paint a false and misleading picture of who they are. The data clearly show that numerous other animals are fascinating beings who continue to amaze us when they are studied carefully or when we simply watch them do the things they do.

A rewilding manifesto for the future: Compassion for all in the anthropocene

"But with a title like The Annihilation Of Nature, one can largely anticipate that this book is not meant to excite any Christmas cheer, although the intelligence and clarity should give any reader some level of hope that the scientific community worldwide is savvy enough and well on track to saving whatever and whoever can be saved." (Michael Tobias)

A rewilding manifesto would clearly state that we will indeed, and with deeply passionate and motivated intention, reconnect with other humans, other nonhumans, and their homes with as much positive energy as possible. One trait we share with many other animals is a strong tendency to be compassionate and empathic, rather than inherently violent (please see "The Evolution and Ethology of Terrorism: We Are Unique, Violence Is a Dead End, But There Is Hope" and links therein; please also see George Monbiot's very interesting essay "We're not as selfish as we think we are. Here's the proof"). It is essential to spread the word about this shared character, based on solid empirical research, especially with youngsters. As Diane Ackerman points out, nature has indeed grown older and is less independent. Furthermore, because of our incredibly self-centered invasive and destructive ways in an epoch called the anthropocene (link is external), the age of humanity, nature is also less resilient. I would like to see the anthropocene be nicknamed the "compassionocene."

If we don't change our ways and do it fast, the proverbial rubber band that holds us all together will snap because it is being stretched far too often and far too much as we get increasingly alienated from other nature, including other humans. At some point it simply will not recoil due to incessant and increasing abuse of the magnificent yet fragile bonds that hold us all together. And then, to put it mildly, we're screwed and so are our children. I shudder to think of how psychologists will deal with the ubiquitous utter despair and hopelessness that will result from the increasing and irreversible estrangement rather than with the optimism and continued but not misplaced hope that can be sustained with a change in heart that is followed by actions that reduce the isolation and violence.

I don't think it's too late to strongly redefine our relationships with other humans and other animals and to have positive results, and I offer that a rewilding manifesto is a way to do it. I lay out some of the ideas in Rewilding Our Hearts: Building Pathways of Compassion and Coexistence and also in The Animal Manifesto: Six Reasons for Expanding Our Compassion Footprint. It'll take some hard work and perhaps a paradigm change, but we really don't have much of a choice. Surely, if we continue on the path on which we're heading, there isn't much hope at all.

Let's all make rewilding all the rage

"The only real hope is taking direct action to reduce the key drivers of extinctions and environmental degradation: over-population and overconsumption. The only effective measure is a rescaling of the human enterprise." (Gerardo Ceballos, Anne Ehrlich, and Paul Ehrlich, p. 175)

There really still is hope for the future, and personal rewilding, as a form of direct action, and however one chooses to do it, can help us overcome the gloom and doom to which we're constantly exposed, for this negativity gets us absolutely nowhere because we can easily get trapped in a vortex of despair and hopelessness. By embracing what we're learning from fields such as conservation psychology, anthrozoology, and cognitive ethology we can comfortably move ahead and forcefully and truthfully argue that we are, indeed, a compassionate and empathic species and that the future can be a far brighter one than if we give up and think that others will do the necessary work.

All humans who can do something must do something positive for current and future generations. We surely can do no less for our children and theirs. And what's so wonderful is that being compassionate to one another and also to other beings is totally natural and is in our genes. So, let's tap into that powerful and positive biophilic impulse and exploit it for all it's worth, and then some. What a shame and disaster it will be if we don't do this right now.

Let's also make rewilding all the rage in 2016 and henceforth. And let's make this revolution celebratory and cheerful as we head into another new year. Now really is the time to rewild our hearts and souls and to share the joy globally, not later when it's "more convenient," for that time rarely comes. In a previous essay called "Rewilding: A Cultural Meme for Rehabilitating Our Hearts," I wrote about the ten p's of rewilding, namely, being proactive, positive, persistent, patient, peaceful, practical, powerful, passionate, playful and present.

And, while we're at it, let's be sure that youngsters know just what we are doing so they will model their behavior on ours and then, they too, can continue to do the good work that is necessary for our magnificent planet and for all beings to thrive and to look forward to, and joyously welcome in, many new days.