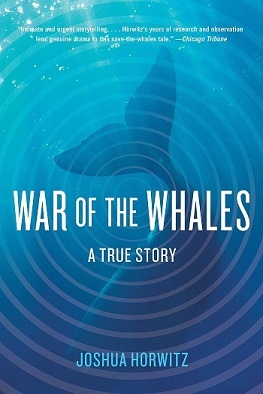 The product of intensive research and compelling writing by Horwitz over a period of seven years, War of the Whales tells the story of NRDC's 20-year legal battle, alongside marine biologist Ken Balcomb, to discover and rein in the classified program for development of high intensity military sonar systems used by the Navy in the detection of enemy submarines. Although the book spans decades of classified Navy activity to build its marine mammal program, the focus of its central storyline is a mysterious series of unexplained strandings and mass mortalities of whales and other marine mammals and the efforts, over many years, by NRDC and Balcomb to document their connection to sonar and then force the Navy, through the federal courts, to take action to avoid or reduce the resulting harm.

This is a story whose conclusion remains to be written. Most recently, in late March, in the latest lawsuit against the Navy by NRDC and others, a federal judge in Hawaii issued a scathing opinion finding the Navy in repeated violation of its legal duties in connection with the siting and operation of sonar testing and training ranges in the biologically rich waters off Hawaii and Southern California. Certain to be appealed unless a settlement can be negotiated, this is the latest battle in a war whose resolution is both sensible and achievable if only Navy leadership is willing to recognize it. Ultimately, the Navy must come to accept that not every square foot of the oceans, regardless of its biological importance, can be made available at all times for testing and training activities that needlessly put those resources at risk for practice.

By laying out the history of the sonar wars in such a comprehensive and compelling yet factually accurate way, War of the Whales persuasively conveys not only the power of determined individuals and organizations in the face of one of the world's most powerful institutions, but the potential - yet unachieved -- for that institution to evolve if its leadership is willing to allow it. This is a remarkable accomplishment for any author, and Joshua Horwitz richly deserves the recognition from PEN that his work has received today.