"What do you think about country music?"

I knew he was up to something. Men like Bill Powell always have those imaginary wheels turning. It's to be expected. It's what he does and has done for over 40 years with Feld Entertainment, the leader in live family entertainment and parent company to nearly 40 live entertainment spectaculars, including Ringling Bros. and Barnum & Bailey, The Greatest Show On Earth. Every successful company has "that guy." The one whose loyalty is undisputed, and more importantly, whose contributions are the thing of legend -- a Joseph to the Pharaoh, if you will.

I could see it in his widened gaze, pursed lips and raised eyebrows as he leaned across the table toward me. This was a loaded question. Not in the sense that he sought to entrap me over something. Rather, whatever was churning in his mind, it was clear that he was prepared to sell me on it, by any means necessary.

That much was clear because he brought the ideal accomplice, Melinda Hartline, a.k.a. Mama Mel. For over 15 years she's advised me, chided me, praised me, walked me back from the brink of more than a few potential public relations mishaps and, occasionally, with the gentlest of care, removed my foot from my mouth. She's that soft, affirming voice and presence in my professional life that I've never been able to say "No" to; hence the moniker Mama Mel.

So there I was, in a kind of checkmate, with Bill fixed on me from across the table and Mama Mel strategically seated to the right of me, making sure her darling boy was being well fed.

"Country music? I'm open to it," I said hesitantly. Admittedly, save for enjoying my fill of Johnny Cash and the Ray Charles classic Modern Sounds in Country & Western Music, I am severely illiterate regarding the genre.

"We've got this idea," Powell said. "Circus meets country. It would be you collaborating with songwriters in Nashville and performing the song."

I was suddenly at ease and excited. This appealed to me. For a good song is a good story, and even with my minimum knowledge of the music I knew no genre tells better stories than country, and the circus has plenty of stories.

Nashville, TN is aptly named Music City, USA. It's home to the iconic Ryman Auditorium and one of America's most sacred musical cathedrals, the Grand Ole Opry as well as rows of recording studios, music publishing giants, an exhaustive number of bars and restaurants featuring live bands, and what seems like a seasoned musician around every corner. I was privileged to become acquainted with two of the city's brilliant and versatile talents, the songwriting duo the 88's, Alissa Moreno and Josh Charles.

A disciple of the legendary Dr. John, Charles is a gifted pianist who has collaborated with several notable songwriters, including John Oates of the Hall of Fame duo, Hall & Oates. Moreno is one of the busiest songwriters today. Her claim to fame was the Rascal Flatts' hit "Everyday." The pair's synergy grants them prolific creativity, penning two to three compositions a day. Charles is the technical wonder to Moreno's aesthetic brilliance.

The synergy was there as we came together in Moreno's home to churn out this musical story about circus life. The duo had completed their first song of the day mere hours ago; thus, their creative energies were high. After some brief introductions, Charles parked himself at the piano and began thumping through chord variations, while Moreno, with laptop in hand, began to brainstorm lyrical phrasing.

It was an exhilarating process. I can only best describe it as a constant mental motion. No matter what, don't stop - just let your imagination lead you.

"There!" exclaimed Charles. He'd found a groove amidst those various chord changes, and as an added bonus, he had conjured the first line of the song, while racing to pick up his guitar, which he'd use for the duration of the process.

"Oh, I like that," Moreno declared. "Travel...life on the road in the circus..." she continued. We had a theme.

While Charles continued the groove, I proceeded to tell the story of moving from town to town, loading in, loading out, boarding that Great American Circus Train, and Moreno effortlessly distilled it all into lyrics. The duo took up the task of debating and finally settling on a melodic structure, me tossing my humble two cents in to adjust a line or two, and viola! In just under three hours we'd composed, The Big Top Life. 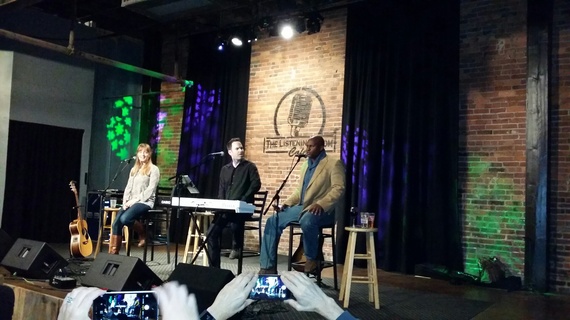 Twenty-four hours later, we were at the Listening Room Café, a hub for songwriters to present their compositions to a live audience. Charles and Moreno were the headliners for the evening, along with the award-winning Jeff Cohen, whose songs have been recorded by the likes of Josh Groban and the Spin Doctors.

A very literal game of musical chairs ensued, as the duo would switch from guitar, to keyboard, to a lone-standing mic throughout the presentation. It was a beautiful evening of music, with the composers giving the backstory about their work and members of the audience erupting in excited disbelief that the authors of some of their favorite songs were mere feet away.

Midway through the program I was invited to join the 88's on stage to perform our piece. It's always a thrill to perform before a live audience, but when performing something of your own making, the experience is amplified.

To me, the stage is very intimate, especially when compared to the 10,000 seat arenas where I perform as Ringmaster. The energy a performer receives from an arena full of people is indescribable. However, the stage doesn't lie. It's easy to miss the truth of you as a performer in the midst of extravagance of the circus and the large space that is an arena, but not on the stage.

Gratefully, our song about circus life was enthusiastically received. At the conclusion of the program, much to my delight, and I must admit amusement, a gorgeously talented songstress by the name of Ashla Taylor sprightly remarked, "You've got a voice like fine liqueur."

I certainly did endeavor to give the good patrons of the Listening Room a taste of circus life. I didn't simply sing my song - I told my story. And for those few minutes up on that stage, this Ringmaster was country.