Alex Rodriguez graces the April cover of Details, kissing himself in the mirror and talking Madonna on the inside. A-Rod's ex-wife Cynthia said her husband had "an affair of the heart" with Madonna and the pair were linked together last summer.

"Well, we're friends...I have a lot of respect for her...She's very smart and she's passionate about everything she does...if there ever was any situation, she's a great ear to have, you know?"'

On his reluctance to name his favorite Madonna song:

"The last thing I want to do is go to every stadium and have them play that song."

"We live in a world right now where everyone's keeping score. And it doesn't stop when the games end...They've crossed over. And you have the Internet stuff, and all these phones...It's very intense."

"I was convinced I was going to play in the NBA. And my mother gives me an NBA roster and a highlighter and says, "Line out all the Dominican players you find there. I looked for 15 minutes and couldn't find one. Then she pulls out a Major League Baseball roster--over 100 Latin players. 'Okay, Mom.' Two weeks later, I was back at baseball."

"New York is one of a kind. It's made me ask all the tough questions. It's brought out the best in me. There are some things I have to work on. And that part is fun. Revealing the truth about yourself is always good."

Read the whole feature on the steroid user here. 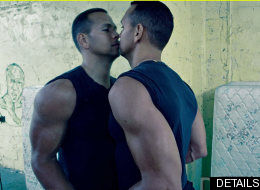