After jihadists slaughtered 132 people in a Paris nightclub, French ambassador Gérard Araud declared on CNN, "It is not because you are unemployed that you blow yourself up in a theater...the problem is radical Islam." Yet, unemployment among Muslim youth is estimated by Eurostat to be 40 percent in France and 50 percent in Germany. Can there be any doubt that financial desperation--not religion--is handing terrorist recruiters a huge pool of potential foot soldiers?

To cut recruiters off at the knees, the United States must encourage its allies to commit to new strategies to integrate Muslim youth into their economies. According to Brandeis professor Andrew Hahn, "Studies demonstrate that entrepreneurship education programs are among the few strategies that work during periods of massive youth joblessness,"

We blame religion and ignore the economic underpinnings of terrorism at our peril. We can fight back with entrepreneurship education, and initiatives that will encourage a worldwide entrepreneurial eco-system to take root, instead of poisonous ideologies.

Viewed historically, it is no surprise that high rates of youth unemployment could lead to shocking acts of violence. In "The Bachelor Bomb: This Lost Generation of Young Men is Threatening Global Stability", Quartz editor Gwynn Guilford explores the close relationship between surging populations of underemployed young men and revolutions or wars. Clear examples she cites include the English Revolution (1642-51), the French Revolution of 1789, and the emergence of the Nazi Party in the 1930s. 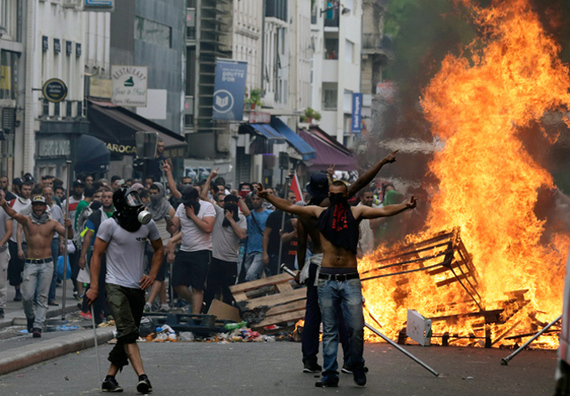 Since 2005, France has suffered through a series of youth riots ignited by rage over unemployment and discrimination. In her 2007 paper for the Institute For Social Policy And Understanding, "Muslims in France: French or Muslim, What Is the Choice?" Moushumi Khan argued that the riots exploded out of French Muslim frustration at "not getting rights of equal citizenship--including employment." Khan added: "The degree of misinformation and prejudice about Muslims in Europe clouds any examination of the underlying reasons for social unrest."

When I began teaching in New York City's public high schools in 1982, I was only able to reach my angry, disenfranchised low-income students when I started teaching them about business. Once I started using business lessons to get their attention, I discovered that they coped exceptionally well with the stress of business risk. They were eager to learn how to make money, and worked hard with great enthusiasm once they were shown how to create and run their own small businesses. They became interested in improving their math, reading and writing skills because these helped them run their businesses, and were less likely to drop out.

But I couldn't prove it.

• A 32% increase in attending college.
• A 4X increase in occupational aspirations.
• Three times as many new businesses as the control group.

The Harvard study also concluded that students learned critical thinking and collaboration skills which created a "psychology of entrepreneurship" and made them stronger candidates for employment.

Education is a priority in France, with 21 percent of the annual national budget earmarked for it, yet according to the French Council of Economic Analysis, roughly 150,000 young people drop out of school annually.

In 2014, France recognized entrepreneurship education as a "cross-curricular objective at all levels of school education," according to School Education Gateways' report "Entrepreneurship Education in France." France has begun to add entrepreneurship objectives into the national curriculum and target Junior Achievement (Entreprenedre pour Apprendre) programs to low-income youth. These initiatives are small, yet encouraging.

Meanwhile, the 2014 and 2016 GEM Global Reports--the world's largest entrepreneurship study--found burgeoning entrepreneurial activity in the world's poorest economies.Ten sub-Saharan economies--Angola, Botswana, Ethiopia, Ghana, Malawi, Namibia, Nigeria, South Africa, Uganda, and Zambia--are "in the midst of an entrepreneurial revolution that is invigorating the region with new opportunities, increased employment, and a robust rise in gross domestic product," according to GEM.

American foreign policymakers need to be aware of this activity. We and our allies can help encourage entrepreneurial eco-systems to take root in Nigeria, for example, to help low-income youth resist the lure of Boko Haram and other violent extremist groups

The GEM Report found "an incredible ability for people here to create their own jobs, and in many cases, jobs for others," adding, "entrepreneurship in sub-Saharan Africa can contribute substantially toward providing income for families and lifting communities out of poverty." 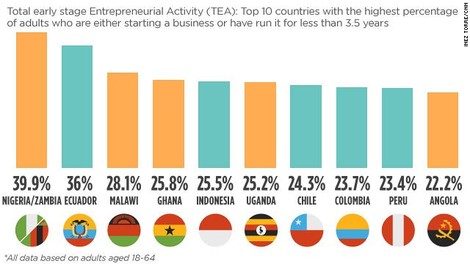 I propose that the United States take the lead in establishing five international initiatives to connect entrepreneurs to markets and financing, and promote entrepreneurship as a viable path out of poverty for low-income youth.

The estimated total annual cost of these initiatives is around $100 million, which pales in comparison to the billions spent on the War on Terror. Potential sponsors include not only national governments, but also the World Economic Forum and major corporations.

2. Worldwide venture capital fund for young entrepreneurs
If 200 countries each choose 250 entrepreneurs to receive $1,000 grants to start their businesses, the total capital required per year would be $50 million globally. That is a small amount to invest compared to the social benefits of building a new generation of entrepreneurs.

4. Free apps to connect entrepreneurs to markets globally
These would enable a small farmer in Syria, for example, to find importers in Europe for his dates. Estimated annual cost $10 million.

Part 2 of a four-part series on winning the war on terror with owner-entrepreneurship education and support for entrepreneurs. Read Part 1 here.