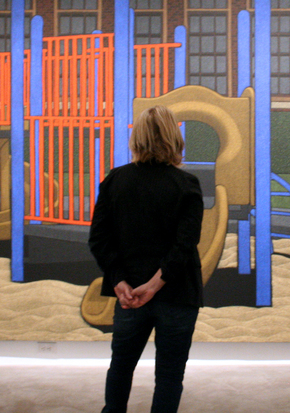 I first saw Amy Adler's work at the Museum of Contemporary Art San Diego many years ago when I was probably still in college. Her "Director" series was being exhibited and the work continues to stick with me over all these years. The pieces are subtle -- faint pastel drawings on white canvas -- which draw you into them by necessity in order to see them. When I learned that they were images of a filmmaker in the act of directing Amy (who remains an unseen performer in the works) I was intrigued by the complications of what (or who) is actually the subject.

This has been a regular consideration in Adler's work: alluding to things unseen while complicating singular definitions of her subjects and mediums. She has made drawings, which she then photographs and destroys to leave only the photograph as the final artwork. She has created drawings for a children's book that was never created. She has drawn herself playing imagined instruments, implying a song that will never be heard.

Her latest project, "Location," which is currently on view at ACME in Los Angeles, includes large scale oil pastel drawings created from photographs she took while scouting for a film, that may or may not ever be made. This being the first work of Adler's without any figures, I was eager to speak with her to learn more about this project.

Virginia Broersma: I usually talk with artists in their studios, but since we are at your exhibition that is currently on view at ACME, I'm interested to hear how the experience of looking at your work is similar or different when looking at it in the gallery versus in your studio. How do you feel sitting here with the work in the gallery?

Amy Adler: Well, the biggest answer to that (or most significant right now) is that I was thinking about a film making term, which is "picture lock" -- when you finish editing a film and that's it; no one is going to touch it again. I've never really thought about that term with drawings before. I think somehow seeing them here they become locked in a way. In my studio I feel like they're living and breathing and I can still change things. Here they're off limits. That's a huge adjustment for me. That's the number one thing I'd say: that they're no longer interactive with me as an artist. They're in their own removed state.

Looking at them here in the gallery, do you have any impulse to keep working on them?

No, I don't actually. The way I worked on them was that I had these five pictures and they were installed around the room. Every time I did something to one of them, I'd continue around the room and do the same thing to all of them. I went around the room probably four or five times over three years, because when I say doing "one thing", it sometimes takes three months. So by the time I made the last trip around, everything I was doing was the last time. 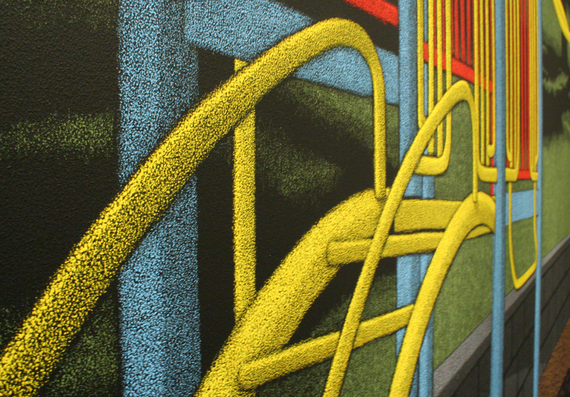 These pieces are drawn from places you photographed while scouting locations for a film, which is where the title of the exhibition, "Locations" comes from. Were you scouting for a film you will be making?

I started making films just within the past few years, and I think that I've been asking myself (and other people have been asking me) am I a filmmaker now? Or an artist? And it's not a straightforward answer. I think this project is a really good example of how those aren't hard definitions.

The thing is that I actually was writing a short script and there was a scene that took place on a play set. So I've been photographing them for a while. After looking at them over a period of time in my archive that I was building, I started thinking about them more as abstract sculptures in the landscape. I actually started thinking of them as drawings in space, because their colors and lines and shapes and composition. I thought, well OK, this is a drawing, this is not a film, actually. I feel like the script fed into the drawings, and it is really complicated how I now think about making the film.

All the pieces in this show are of play sets - how did you choose that particular subject?

For me, when I land on a subject, it usually is because there are a few different reasons. There isn't one reason, but a few going on at the same time. For example, I've never done a show of just landscapes. I've always had people in my work and I've actually done very little landscape at all in the work. Also, because I've been thinking so much about drawing as sort of outside of the realm of art, and where it potentially exists in nature - that these are actually drawings in space; how drawing exists outside the context of just what we think of as art, but in the landscape. 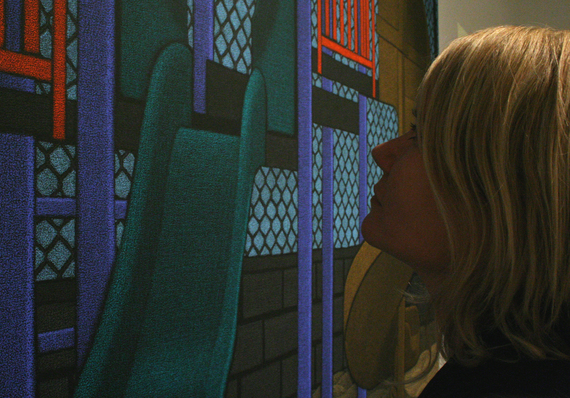 Also, in a lot of my work I've spent a lot of time thinking about this idea of what you don't see. Even though there aren't figures in this work I feel like they're incredibly present, you can hear them and sense them and practically feel like they're going to go running into this any minute.

Well, you almost become more aware of them because of their absence. These are spaces that are meant to be activated by people or children, and because they're not there, you are almost more aware of them and wonder why you don't see them. It becomes a point of focus.

There's a piece I did called "Phantom Instrument" and it's this performance where I'm playing all these instruments that you don't see. The focus is this thing that isn't there. I really love that idea. I think it's really interesting if you can create that with drawing. 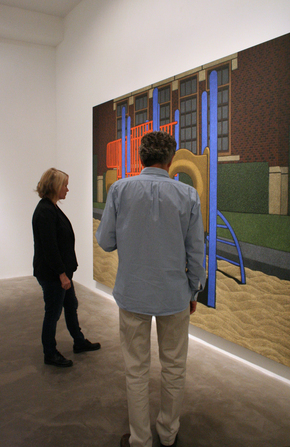 You fill in the blanks...

Yeah, this stuff is really my driving force. I'm always thinking on these levels, but on the other hand, I'm aware that the drawings themselves have to perform free of my intentions.

My experience first seeing them was that the playground was such an unexpected subject. As I continued to look, I became more focused on the formal elements, the almost rudimentary forms - the primary colors and seemingly simple lines. But then you realize how complex the pieces are, like a puzzle. I began to notice the beautiful choices you've made with the shadows of the trees or the silhouetted branches and how they become graphic shapes, or the smooth curl of the slide; I find myself quickly losing sense of the identification of it as a playground and being caught up in the attraction of looking at them.

That's kind of what I was thinking when I described that kind of hallucination. I really went in and out of thinking of them as specific objects. Puzzle is a good word - I like that a lot. All the black space is negative space. That was really exciting to me - the richness and potential of all that black void. It's in every single drawing and it has a big role - the raw canvas.

There is something very basic about the construction, but at the same time, within each one there's some really complicated challenges, I have to say. There are a lot of really goofy moments. There are some moments that work really beautifully, but there's definitely some moments that are... for example, some of the architecture - if you spend a lot of time, you would start to identify things that don't necessarily connect. Things that have no logic. But it takes a long time to notice them, even for me. Like I never noticed that that pole doesn't go anywhere, you know? But I love that - that you can make something so colossal and still have these weird spontaneous moments where things don't make sense, or surprise you. 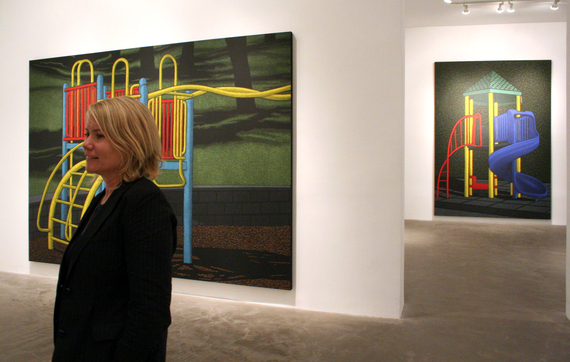 What is your favorite part of the process?

Well, my favorite part of the process is drawing. In a lot of ways these are big productions and there's a lot of pieces to them. The way they were made, trying to figure out the backgrounds, and then how to get the imagery up onto the canvas. But it is all occupied by me just going like this [moves hand as if she's drawing]. That's where the bulk of the time is. It's very physical and very intense and delirious, kind of crazy making at some times. But I'm well aware when I'm working that that's the good part.

So what's the most challenging part? Or part you dislike the most?

That's a good question. It's like a double edged sword, because there's one thing in each of these drawings that was incredibly painful - the leaves, the bricks, the chain link - because I didn't have any assistants working on these drawings with me and because of the repetition and the shape is so small that my hand would really cramp up and there would be these moments where I think I can't make it. I can't say that it's my least favorite part but it's definitely the most difficult part of it.

Amy Adler's solo exhibition "Location" will be on view at ACME in Los Angeles through December 20th, 2014. Here work can also be seen on her website.