Shoppers at one of Skopje's busiest malls were stopped in their tracks today by the sight of one of the country's famous sports stars, marathon-runner Kokan Ajanovski, running in circles while checking his phone. 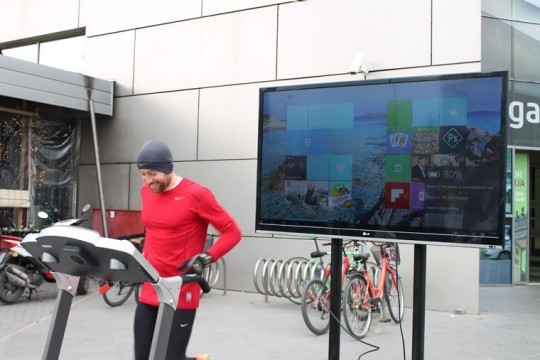 Many onlookers at first thought the athlete must be advertising yet another special phone app for running or a new brand of footwear. Moving closer to get a better look, though, they soon discovered the star was up to something stranger than your average marketing stunt--he was here testing out a prototype for a revolutionary device that uses the energy generated by walking and running to charge mobile devices like phones and tablets.

The unique charging-device is the outcome of six months of hard work and dedication by a group of four innovative students whose idea for the invention recently won a national Climate Challenge competition with a prize of 10,000 US dollars to help develop the prototype.

"Sometimes it's felt like winning the competition was the easy part!" says Aleksandar Lazovski. "Since the win we've been working non-stop on the practical details of the design, consulting with experts and UNDP staff on the most effective ways to develop the prototype."

Today's demonstration of the device in Skopje by Koko Ajanovski is proof that all this effort has been worthwhile: the prototype is up and running! And judging from the reactions of the crowd at the event, the charger should soon prove a hit on the market.

"Who wouldn't want these shoes soles? It's a no-brainer," said one shopper. "The only weird thing is they don't already exist."

"It actually makes me quite proud that students from my country came up with this idea," said another onlooker, "It's encouraging for the future." 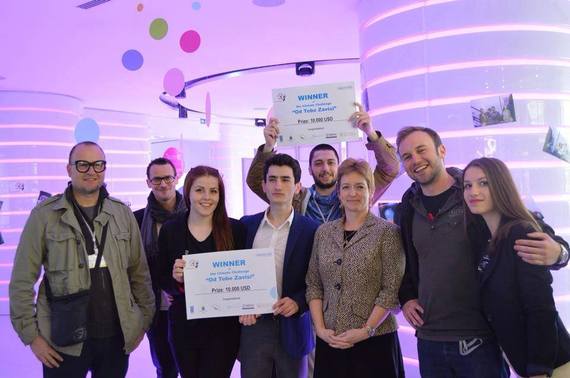 The idea for the device was first thought up by 19-year-old Loreta Todorovska, a student of Accounting. "I was getting so frustrated with forgetting to bring my charger with me that I started thinking of ways to attach a charger to clothes. Then I started thinking of how to cut out the need for a power source altogether."

Loreta shared her idea with the other three students in her team: 21-year-old Martina Dimoska, student of nano-materials and robotics; 20-year-old Aleksandar Lazovski, a student of marketing and management; and 20-year-old Nikolco Gosev, a student of network technologies. Together they came up with the eco-friendly idea of using energy from everyday walking and running to generate charging power.

The team had already worked together on other innovations, including establishing an NGO called Smart-Up dedicated to helping IT graduates develop their marketing and communications skills in order to get ahead in their careers and business. Now they knew they had a really ground-breaking idea for a product with huge potential on the market.

"We knew from the start it was a smart idea," says Nikolco Gosev. "But then we faced the hard questions of how to fund its development into a marketable product. We needed backing and we needed expert advice. And, fortunately, that's when we heard about the Climate Challenge."

Organized by UNDP with support from the Ministry of Environment and Physical Planning, the Swedish Embassy, USAID, MilieuKontakt and the Social Innovation Hub, the Climate Challenge sought to tap into the country's talent by inviting the public to submit innovative ideas for mitigating climate change. Some 130 ideas were submitted and ten were shortlisted for the 2-day Climate Camp.

"Winning the Challenge was an amazing boost of confidence and a huge step forward for our idea," says Martina Dimoska. "It's given us invaluable access to funding and input from experts. We've got a real chance to succeed now and to make a real difference to the environment."

With their prototype complete, the members of the team can now turn their attention to finishing their university studies. At the same time, however, they will be applying for a patent for their invention--making them the youngest patent holders in the country.

"If there's enough demand for the shoe soles," says Martina, "the next step is to start up a company."