Sweeney and I go way back. It was the first musical where I found myself blown away by not just the music, but also the plot. I still recall my 15 year-old self sitting in my grandparents living room giving the original Broadway cast album a spin on my trusty Sony Walkman. The album, gloriously produced by Thomas Z. Shepard, felt more like a radio play than any cast album I'd heard before. And when the final moments were revealed, I pulled off my orange foam headphones and yelled, "No way!"

The Sondheim masterwork about a revengeful barber righting the wrongs of his past by slitting the throats of the upper class has stuck with me since.

Porchlight's more than fine production certainly scratched my Sweeney itch. It's been at least a few years since I've seen a live production (The last being Drury Lane's), and this period of late fall presents the ideal time for a close shave with the demon barber of Fleet Street.

Directed by Porchlight Artistic Director Michael Weber, this production dazzles on many occasions, but at times seems to suffer from a bit of an identity crisis. It's a small-scale production with big time ambitions, often pushing Stage 773's black-box stage to the extremes -- almost to the breaking point. Which isn't a bad thing -- I like to be delighted and surprised by bold thinking and innovative staging. However, sometimes less is indeed more, and having, say, Joanna (the pure-voiced Stephanie Stockstill) being rolled around atop a tall staircase during "Green Finch and Linnet Bird" with her blonde curls nearly entangled with the lighting rig may feel more like a distraction than a representation of her entrapment.

However, Weber's innovative staging has many pluses, including his creative conceptualization of the barber chair -- a puzzle of a scenic element for any director. This chair operates unlike any other I've seen, and it's both fascinating and chilling. 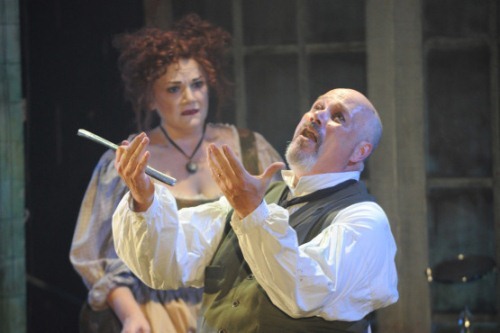 And yet, the meat of any good Sweeney is in the pairing of the title role and his partner in crime, the kooky pie maker, Mrs. Lovett. David Girolmo is among the best Sweeneys I've seen. Despite being full bodied with a booming voice, Girolomo doesn't lean on that -- his Sweeney is a tortured, human soul, with moments of anguish and reflection. You can see flashes of the man he was prior to the reluctant cutthroat he became. Rebecca Finnegan revisits a role I saw her in 10 years ago -- a Sweeney also produced by Porchlight. Her Nellie then was brass and cunning, with a devilishly wicked streak. Now, she's added layers of lust, humor and pathos, resulting in a landmark performance for this Chicago actor. Together, Girolmo and Finnegan deliver one of the steamiest "A Little Priests" I've seen. As the number wore on, the heat turned up to the point of scalding.

The ensemble cast delivers Sondheim's difficult choral moments with cutthroat precision, thanks to music director Doug Peck. Standouts include Kelli Harrington as the Beggar Woman (what a voice!) and Kevin Webb as the weasily Adolfo Pirelli. Also, kudos to Javier Ferreira, who covered for the hopeful Anthony the night I saw it and gave a completely polished performance, even nailing the tricky "Ah, Miss" interlude.

If you haven't attended the tale of Sweeney Todd yet, or have luckily survived a visit with the demon barber before, Porchlight's Sweeney will certainly satiate.