The fight over Net Neutrality -- that fundamental principle that keeps the Internet open and free from discrimination -- can get pretty wonky.

It's sometimes hard to find the right words when you're trying to communicate to policymakers, geeks and the general public at the same time. How do crucial issues like "paid prioritization" harm the open Internet? What are the dangers of "specialized services"?

But a picture can be worth, well, you know. That's why I always liked this clever illustration about what an Internet without Net Neutrality would look like: 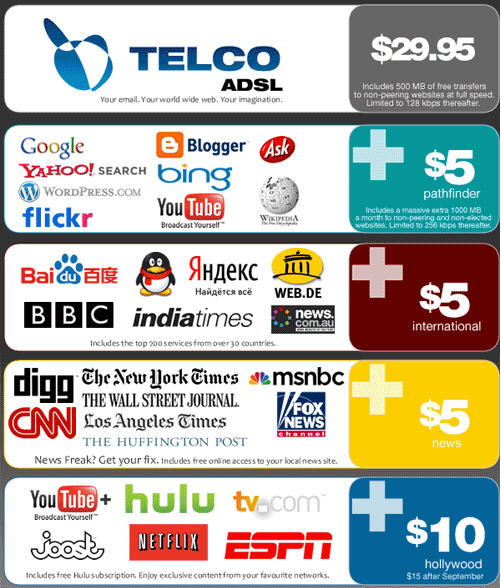 To most of us, that looks like a nightmare. But to big companies like AT&T and Verizon, it's a business plan.

Even as the Federal Communications Commission weighs new Net Neutrality rules, the dominant phone companies and their vendors are plotting a dystopian future for consumers that you won't see in their soft-focus ads.

But you will see it soon enough.

On Tuesday, Allot and Openet -- two companies that specialize, respectively, in "deep packet inspection" technology and billing software -- presented their plan to give wireless operators new ways to nickel-and-dime customers while dictating the development of mobile apps. I got my hands on a copy of their slides.

Their presentation unveiled a new hardware and software package that will enable mobile wireless providers to block, prioritize and discriminate against Internet content based on its source. The two companies -- one of which, Openet, already counts AT&T and Verizon as clients -- boasted that their new "policy control" solution "enables operators to monetize their networks, with a focus on online content-based charging of [mobile] applications."

One slide prepared by the companies depicts how a customer of a wireless company like Vodafone (or any company that deploys their product) would be charged different discriminatory rates based on the source of Internet content. The slide suggests that consumers can access content free of charge from their carrier, while paying 2 cents per MB for Facebook, $3 per month for Skype, and 50 cents per month for the privilege of accessing YouTube. Here's the illustration: 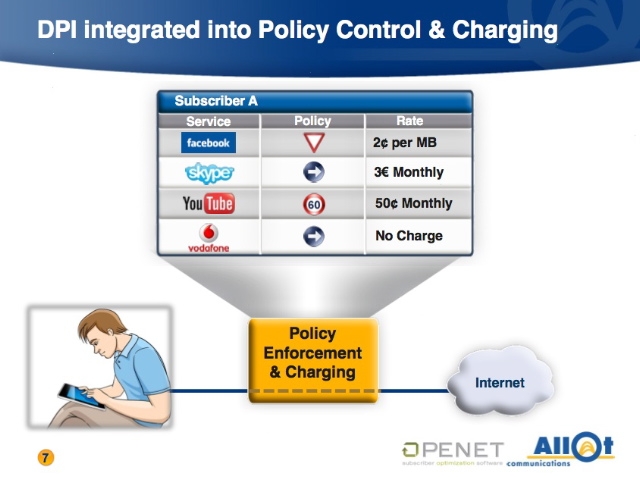 That's not all. Another slide discusses how mobile operators will be able to implement "application-specific pricing," and "tiered services." Still another presents the benefits of "split billing." Imagine your customer is watching a movie on his iPhone, the vendors explain: "First 15 minutes of the movie [would be] streamed for free to user as a promotion. If user doesn't purchase movie, content provider is billed for the 15 minutes of network consumption. If user purchases movie, revenue is shared between operator and content provider."

That's their vision of a pay-to-play, metered-down-to-the-millisecond wireless future. Such blatant Net Neutrality violations are far from hypothetical: The scenarios clearly reflect the industry's active desire to engage in such behavior. In fact, the press release announcing the presentation stated that it was being conducted "due to the great interest shown in this joint solution."

How can they get away with this, you ask?

Well, remember that the wireless market is increasingly uncompetitive. The two biggest carriers -- AT&T and Verizon -- already control more than 60 percent of the market and have locked down devices like the iPhone that you might actually want to use to go online. The top four companies account for 90 percent of the market.

The lack of competition and choice suggests we might need rules to keep these companies from exploiting customers and stifling innovation. But that brings us back to the FCC -- which according to numerous press reports is planning to exempt mobile wireless operators from Net Neutrality protections.

The schemes proposed by Allot and Openet will be the very real-world consequences of such a short-sighted decision by the FCC. Mobile wireless services will never be viable competitors to the phone-cable duopoly if their future looks like this, and these discriminatory practices will destroy the mobile Internet as an open platform for innovation.

When these companies talk to the press and politicians, they pinky swear that they would never interfere with the free-flowing Internet; they say that Net Neutrality is a "solution in search of a problem," and they claim "self-regulation" is enough to keep them in line. But of course these slides show (yet again) that when carriers talk to investors or among themselves, they tell a completely different story.

What will it take for the FCC to wake up? We already know that underserved communities and people of color are more likely to use mobile wireless services as their primary Internet connection. Having glimpsed at this version of the mobile Internet's future, does the FCC really want to adopt rules that create open networks only for those Americans who can afford them and to relegate low-income, minority and rural Americans to an Internet without free speech protections and cutting-edge applications?

We'll have a clearer picture of where the FCC stands next week when it meets to vote on Net Neutrality rules, but right now it doesn't look so pretty.