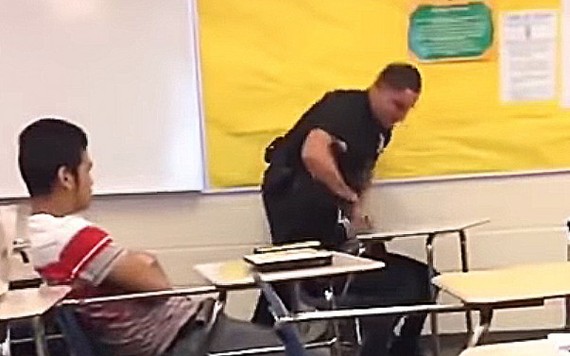 By: Wade A. Davis II

This past June in McKinney, Texas, we watched the video of officer Eric Casebolt slam to the ground and place his knee in the back of then 15-year-old Dajerria Becton. Casebolt detained her as other officers attempted to arrest other Black kids who attended an interracial pool party. Becton had the nerve to use her voice and disapprove of the actions of Officer Casebolt and his fellow officers. As the teen lay helpless on the ground in a bikini bottom and top; she cried out, "Someone call my momma."

On Monday, we witnessed officer Ben Fields first seize, body slam and then toss a female student across a filled classroom of her peers and then handcuff her. I imagine, though it isn't audible in the video of the incident, she called out for her mother or someone too.

Regardless of the screams and cries for help, Black parents alone cannot save their children. In most cases, if they tried to intervene, they would become victims of the same fate.

Truthfully, it's going to take us all to stop this type of senseless aggression. There's no Black mother or father alone that can change the path that America has embarked on to destroy its Black brothers and sisters. No ally, who doesn't see the struggle as theirs, is coming with millions of dollars to back the NAACP or the Black Lives Matter movement.

Only when we collectively start to shift our consciousness and start seeing Black children and the Black family as a part of each other's family will we ever truly see change. When we collectively start to see our daughters, sisters, and nieces in these videos, we will seek to change the system. Until we see ourselves, we will never fix what's broken inside of us all.

Recently I asked a friend, who's White, how the police were portrayed to him as a child. His response resembled how many of my other White friends describe the police: helpful superhero types who come along to destroy all things evil.

Juxtapose that image with how I grew up to understand the police and their role in my community. My grandfather never ever had one kind word to say about the police. He actually introduced the term "roaches" as a way to describe the police and their presence in our community. And every other member of my family only spoke about the police as a group of individuals whom I should always avoid, and if we did cross paths, to show great deference towards in order to save my own life. Even now, as an adult, I have never ever felt remotely comfortable in the presence of a police officer.