In the fall of 2008, Brandeis University launched the first Science Posse program to attract and retain talented, underrepresented students in college-level science. Founded by Brandeis chemistry professor Irving Epstein in partnership with Posse, a highly regarded college-access program, the Science Posse recruits, trains, and provides mentoring for "posses" of 10 students each year to prepare them for studying science at Brandeis. A grant from Carnegie Corporation of New York helped support the development of the program.

Usman Hameedi is a native of Brooklyn whose parents immigrated to the United States from Pakistan. An aspiring doctor and accomplished poet, Usman majored in biology at Brandeis and graduated in May 2012. He now works as a research technician at Memorial Sloan-Kettering Cancer Center in New York and plans to apply to medical school. Here he tells what it meant to him to belong to the first Science Posse.

Growing up where I did, I didn't have access to rigorous prep classes or the opportunity to shadow doctors. Science Posse came into my life by accident. By the time I had gotten to the third round of interviews, I knew that I wanted it. It helped me push myself a little harder during high school. 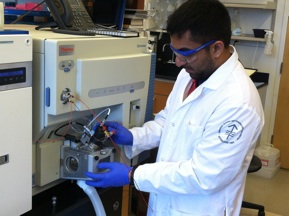 "Science Posse was new to everyone at Brandeis -- the students, the mentors, the faculty and the administration. You could tell there was a lot of interest in making it a success. People wondered: Was this too ambitious? Would this work? Are we shooting for the moon and we will miss it, or will this be something revolutionary? We knew that we were part of an experiment, but we liked that. We thought we could set the bar really high -- and I think we did that."

As a group, the Science Posse members interacted well with each other. We weren't always best friends, but we knew we had each other's backs. I was especially close with Rebekah Lafontant. We both worked as community advisors (residence hall assistants). She was someone who knew who I was. Our friendship went beyond Posse. I could be vulnerable with her when I was having tough times at Brandeis, and I knew she would be there for me.

By the time I reached my junior year, I was taking organic chemistry, writing poetry and serving as captain of the Brandeis Poetry Slam team. It pushed me to my limits. But it's important to deal with and overcome challenges if you want to be a doctor. You have to ask yourself, 'Can I really do this when it's difficult? Do I want this even during the moments when it isn't a pristine white coat, when it is old coffee and sleepless nights? As a profession, medicine has always had a natural allure but the journey to the destination of 'Doctor' isn't easy. You must be prepared for the hard work ahead.

I had so much going on and needed to juggle my time effectively. Life is more than 'orgo' - there are a lot of other things happening at the same time. I learned to focus on what was in front of me. That is a valuable skill to have.

Irv Epstein is a remarkable human being. His intellect is awe-inspiring, yet he is so humble. He's always there to give a hand to help. I took general chemistry with him and checked in with him when I needed some support. He helped arrange a summer fellowship through Howard Hughes Medical Institute for me to conduct research in protein crystallography at the University of California, Berkeley. I went back to Brandeis Commencement this year and made sure to thank him for all he had done for me.

Most people would look at my interests in science and poetry and think that they represent the ultimate dichotomy of thought. On the contrary, the skills you need as a scientist and a poet are very similar. Poets use their senses and words to present life in unique perspectives, sharing new viewpoints with others. Likewise, science is a tool used to analyze problems from different angles, with the intent of furthering discovery or finding solutions.

One of the beauties of Brandeis was that it gave me the space to be a scientist and poet. I pursued both with great vigor. In addition to my scientific achievements, I was a finalist to serve as the undergraduate Commencement speaker. I performed at Mela, the South Asian cultural show. Performing and sharing my writing helped me find a greater sense of my own identity. It also helped me create friendships. Brandeis helped me realize that science and writing together does, in fact, make sense.

I am working at Memorial Sloan-Kettering as a research technician in the new Cell Metabolism Core Laboratory. It's an amazing opportunity because the work we are doing is so cutting edge.

I hope to go to medical school and become an oncologist. It's a remarkable field and it's a calling for me. It is a field blossoming with creativity in how specific types of cancers are addressed and tackled. But helping someone who has cancer is beyond medical treatment. I also want to work towards creating more spaces for art therapies. Art can help people regain expression and voice during the vulnerable times after a delivered prognosis. My goal is to integrate my passions cohesively so that I can better serve my future hospital community as well as the needs of others wherever I may go.