However, if one removes the letter "b" from the end of the word "dumb" and substitutes "dum" as a musical syllable, the results bear a strikingly different (and frequently criminal) connotation. Two "dums" form the ominous leitmotif for a scene change during any episode in the Law & Order franchise.

Three "dums" form a universally recognized cue that something bad is about to happen in a mystery.

For some people, four "dums" are easily recognizable as the beginning of the first movement of Beethoven's Fifth Symphony.

However, four "dums" also introduce the musical theme from the popular Dragnet franchise.

Three dramas playing out on Bay Area stages during May were notable for their sense of foreboding coupled with the audience's suspicion that no good deed would go unpunished. Two were short plays on the program for the Best of Playground 19 Festival. The other was an intense one-act black comedy receiving its world premiere from the folks at San Francisco Playhouse.

Written by Rachel Bublitz and directed by Rebecca Ennals, Reading Babar in 2070 is filled with the kinds of twists and turns worthy of a short story by Guy de Maupassant. As the action begins, a very pregnant Lucia (Stephanie Prentice) is asleep on the couch, taking a nap. When her husband, Michael (Michael Barrett Austin) and daughter Tina (Millie DeBenedet) return from grocery shopping and a trip to the library, Tina launches into an impassioned speech about why she loves elephants and asks her parents to read a book to her that she brought home from the library.

The politically correct Lucia scolds her husband for bringing home a book about Babar the Elephant, explaining that it's not really about elephants at all. But there is no stopping Tina, whose love for elephants nearly surpasses her love for her parents.

Lucia's self-righteous bubble quickly bursts when the conversation turns to the fact that, with the exception of the few pachyderms living in zoos, in 2070 elephants are extinct. With a child's laser-like instincts, Tina asks what her parents did to help save the elephants, only to learn that when Lucia and Michael were in college they were "too busy" to pay attention.

In Erin Marie Panttaja's poignant Preapocalyptica, Melissa (Melissa Ortiz) is a homeless person living in a cardboard box who is visited by Will (Jomar Tagatac). At first, Will just seems like a good Samaritan trying to give the hungry Melissa some food and water.

But, as carefully directed by Katja Rivera, the audience soon becomes aware that Will is actually Melissa's husband and that he is desperately trying to break through her crippling fear about the need for everyone to work harder to conserve food, energy and other resources. While Melissa worries aloud about not being able to conserve enough to help the world, Will gently tries to coax his wife to come back home so that he and their children can take care of her.

Those who were captivated by Jim Carrey's performance in 1998's popular film, The Truman Show, may find Richard Dresser's vicious farce, Trouble Cometh, even more compelling. Like Aaron Loeb's Ideation (which received its world premiere from San Francisco Playhouse in late 2014), Trouble Cometh probes the darker depths of the lizard brains of corporate executives and the depraved depths to which they will go when necessary. 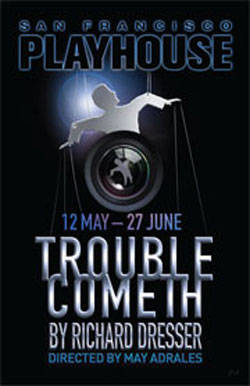 Skillfully directed by May Adrales, Dresser's script follows the misadventures of Joe (Kyle Cameron), a likable young man who desperately needs to hold onto the first job he's had in nearly a year. A man with precious little spine, Joe's loyalties are being tugged at from all sides. 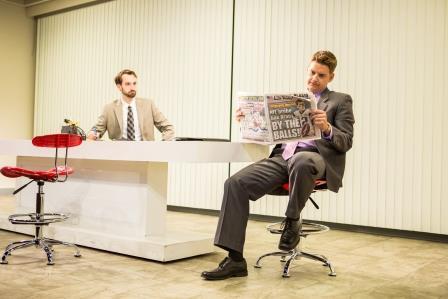 No matter how desperately Dennis tries to outmaneuver his superiors (who are quite adept at switching meeting times and locations), his attempts to demonstrate his leadership qualities are often upended whenever Kelly arrives with a fresh change in corporate direction. 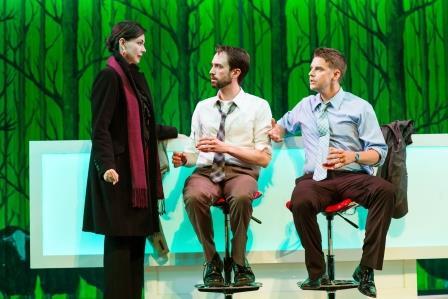 Just when things seem like they couldn't get worse, a new corporate decision maker named Vashti (Nandita Shenoy) arrives to rattle the tiny cage in which Joe, Kelly and Dennis are trying to polish a sales pitch for an insanely brutal reality television show which will force two families to compete against each other. With the men completely thrown off their game by having to relate to a strong woman from another culture, their sense of white privilege (mixed with a lot of repressed sexism and racism) takes over.

With Joe's incessant ass-kissing causing Vashti to insist that he stop echoing everything being said in their meeting, it looks as if the project may be doomed. By the time Dennis and Liz resort to drinking the poison they've kept onsite (to be used in just such an emergency), Joe can barely tell if the events he's witnessing are real or if the colleagues he's looked up to (and tried so hard to please) are completely insane. 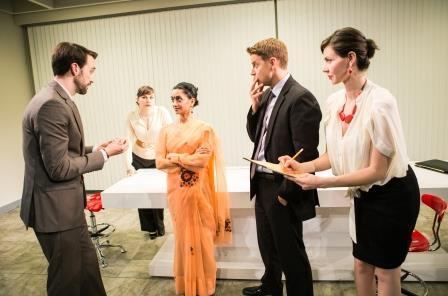 The cast of Trouble Cometh (Photo by: Jennifer Palopoli)

Like Ideation, much of the action takes place in a corporate conference room where the frenzied fantasies of desperate executives flutter, crash and burn with frequency, accompanied by the forceful sound design of Theodore J. H. Hulsker. Dresser piles on the laughs with sharp insight into the behavior of stressed out corporate whores who want to please their bosses but have no idea what they can do to deliver the goods. The cast of Trouble Cometh delivers in spades (especially Patrick Russell, whose juvenile meltdowns seem like a series of mad scenes written for an aging, incompetent jock). 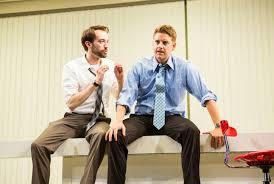 While Kyle Cameron's Joe and Liz Sklar's Kelly experience the greatest amount of change, the real star of the evening never appears onstage. That would be one of the Bay area's most talented set designers, Nina Ball, who has created a unit set of such remarkable flexibility that, to my mind, she ended up stealing the show.

Dresser's play is a fast-paced, intelligently plotted and merciless comedy which will easily entertain anyone who has dealt with incompetent bosses and corporate backstabbers. The surprise ending is beautifully handled with one of Nina Ball's greatest coups de theatre.