Reading New York Times today, I was reminded how the biggest problem with acquiring a car in Beijing is not the actual purchase, but having the vehicle registered. With heavy smog, poor visibility and congested streets, Beijing doesn't look like a city that seriously tries to restrict traffic. But to be fair, authorities do try, only they are not very good at it.

Chinese cities have various ingenious ways of obstructing registration of cars. License plates in Shanghai are well nigh impossible to pay, and drivers with out-of-town plates suffer heavy restrictions of movement inside the city. While license plates with lucky numbers are auctioned off to the highest bidder in Hong Kong (which, opposed to most Chinese cities, supplement the system with highly efficient public transport), Beijing has the tiniest needle eye in all of China; in Beijing license plates are distributed through a kind of lottery.

New York Times tells the sad story today of Mr. Li who has unsuccessfully tried to legally obtain a license plate 47 times over the last five years. According to NYT only 3725 of the 2.7 million gamblers for a Beijing license plate got lucky in June. With over 20 million citizens, Beijing now has 5.6 million cars. A few years ago, 1000 new cars would pour into the streets of Beijing daily; now authorities aim at restricting the increase to a mere 246 cars a day in average. Cars are responsible for some 30 per cent of pollution in Beijing.

The article reminded me of my early China days as an exchange student in 1981, the very beginning of gaige kaifang, Deng Xiaoping's introduction of economic reform and opening up, which turned out to be the largest economic revolution the world has ever witnessed. 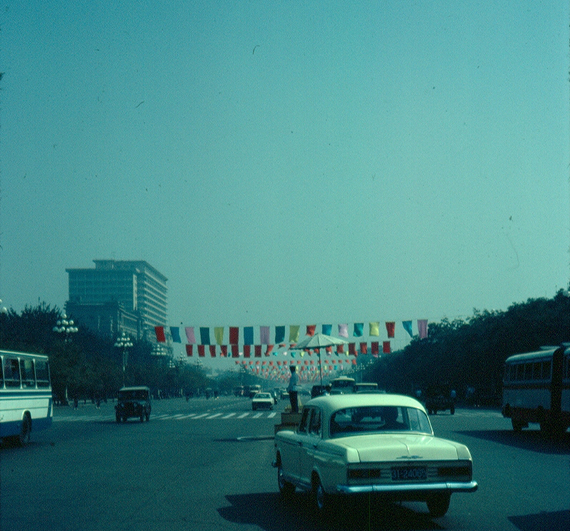 In 1981 Chang An Da Jie, the Boulevard of Eternal Peace, which cuts East-West through Beijing had only one single lane for cars. The rest were for bicycles. Today it is the other way round. There were no private cars, and the entire fleet of vehicles could be counted in the hundreds and the groaning bendy trolley busses that inevitably stranded likes whales on shore, and had to be re-connected to the wires; Jiefang (meaning Liberation) lorries, army jeeps, the odd mint green or crème coloured passenger car Shanghai, and the distinguished black limousine Hong Qi, Red Flag, all of them copies of robust Soviet 1950s models. In the absence of tinted windows the limousines had adorable white lace curtains, so you could look out, but not into the car.

Traffic at that time was bicycles, millions of bicycles, in Beijing and in the countryside. In the daytime the sun often shone from a clear blue sky, and the beautiful Fragrant Hills in the distance were easily visible from the city centre (a memory to truly cherish, as most Beijingers under 25 most likely have rarely been able to enjoy that wonderful view). There was hardly any traffic in the evenings, very little evening entertainment, no nightlife and very little streetlight. We were young and curious, and often rode our heavy bicycles, Golden Deer (also copied from the Soviet Union), some 15 miles from our school and into the city, to the Peking Hotel for a beer. And then we would ride home through the quiet, dimly lit empty streets, a most welcome change from the bustling daytime.

Occasionally, we would come across a caravan of camels. The sound of camels is ever so light. In order to actually hear their soft approach there must be no other sounds. Silently watching and listening to a passing camel caravan under Chang An Boulevard's dim streetlights was magic. In the early 1980s the camel caravans were relegated to night hours. The slow and magnificent animals were no longer welcome in the streets by day, blocking the way for bikes and busses.

Back then shepherds too, herded their flocks through the city to the abattoir, South along the Forbidden City's Western wall enclosing the government headquarters, Zhongnanhai. Some of the sheep wore bells, so one could always hear their approach from afar. The sheep were relegated to nights as well. Later, horse and mule carts were also forced off the streets during the day, and then further afield to outside the ring road and later even further out. At the time fields were still plenty within the Third Ring Road, and, apart from the Soviet style Agriculture Exhibition Centre, almost everything beyond the ring road was fields.

Later, as a journalist, I reported from Beijing in the early 1990s when traffic was ever swelling, how lorries too were gradually banned in the daytime. By then, animals had long been expelled, now only people left to choke on the increasingly polluted air. Private ownership of vehicles was legalised in the mid-nineties, which meant even more congested traffic - and while traffic accidents used to be mostly noisy affairs with people shouting and their bikes and shopping in big heaps all over the place, they became deadly affairs with cars crashing into pedestrians and cyclists.

Trying to control motorised traffic in Beijing has always been a challenge for the authorities, public transport never quite adequate, and people being able to bribe or simply buy their way around restrictions. E.g. when driving was restricted to only allowing cars with even registration numbers on the streets on even dates, and odd on odd dates respectively, the wealthy simply bought an extra car in order to be able to drive every day, which was definitely not part of the plan. Chinese authorities are so intent on controlling people that they rarely bother to consult citizens about their needs, wants and other practicalities; stupid and very often counter productive as well.

During the Olympic Games in 2008, I reported how the city introduced special Olympic traffic lanes. They are still there, now reserved for big shots, be they on official business or just buying their way into the fast lane - which reminds me of the demise of Ling Jihua, a close advisor to former president and Communist Party chairman Hu Jintao.

Things were going quite well for Ling who was number four in the Chinese political hierarchy - until his son crashed with his black Ferrari 458 Spider one very early spring morning in 2012. The son died, his passengers, two young women, one naked and one half-naked, were seriously injured. Because of the father's prominent position in the Communist Party, the authorities tried to keep the spectacular crash secret, which proved impossible and caused an uproar in the Chinese blogosphere.

Ling Jihua was soon removed from his post, demoted, and two years later he was arrested. At a secret trial this June he was sentenced to life imprisonment for a string of crimes, including bribery, corruption, obtaining state secrets and abuse of power. Ling shares this fate with many former colleagues in China's top leadership, and his demise may also be seen as part of Hu Jintao's successor, president and party boss Xi Jinping's continuing power struggle and ridding himself of opponents, usually disguised as his unrelenting fight against corruption.

In this light, of course, it may be easier to resign oneself to being an average person with average difficulty in legally obtaining a license plate for your perfectly average car along with 2.7 million average co-Beijingers and prospective car owners.

Or return to the good old days, when bicycles outnumbered the cars by far ... Today, it might even be faster.

More in Back When Camels Were Welcome in Beijing, a recent essay on my early days in Beijing.