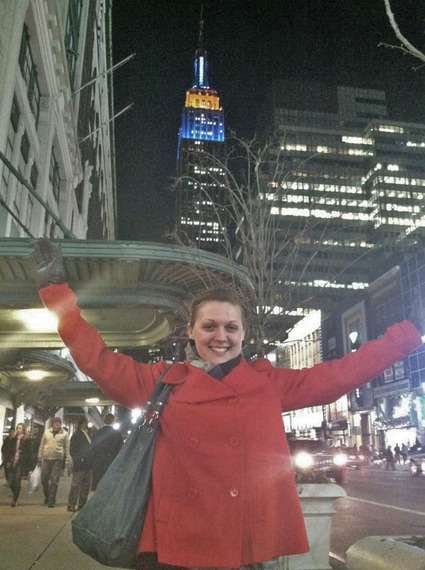 
I just thought if I'm moving somewhere, I'm going to take what is important to me. I thought of my sewing machine because I am a designer. That is what I do. I make stuff. So I lugged my sewing machine through New York's turnstiles. It was my security blanket. But little did I know, that no one who designs makes things anymore. They just email the people that make things.

Jamey Brittingham was ready to take on New York's fashion industry with eight hundred dollars and her trusty sewing machine after rounding up the funds at her graduation party from Radford University as a designer.

Raised in Pocomoke, Maryland, with a population of about 4,100 people, Jamey had a dream of working as a fashion designer. New York called her. She couch surfed until she found a steady job but soon realized that secure jobs had loose definitions. She accepted a position after meeting a designer who promised her a two month internship followed by paid work as assistant designer.

I needed a job so I took it. The first day I get there, it is this little apartment in Queens. [It is] the end of June [and there are] six other people with no air conditioning. She had me molding cheap flip flops with a hair dryer in a ninety degree apartment. I found out that it was a scam and she wasn't paying anybody. I quit after my first day but I didn't want to give up.

The sweatshop replaced a paying job at a Hasidic Jewish restaurant. Jamey soon found herself in hot water, again, when she showed up in shorts. Unaware of the offensive nature of her outfit, Jamey learned to laugh at herself and to embrace the bumps that came along the way as she embraced the beautiful cultures that she had longed for on Maryaland's Easternshore. Cultural mishaps and fake job promises however, did not prepare her for the maze that is NYC's public transportation.


I tried to get a job at a consignment shop. That is one job I really wanted because I loved thrift shops. I didn't get the job because I was late for the interview because I got on the wrong bus. They made me wait for thirty minutes to tell me, 'I don't know why you are still here. We don't want someone who is late.' They had a point, but they didn't give me a chance to tell them what happened and that I literally had just moved there, but they didn't care.

That was another harsh reality. No one cares that you are late or why. There are a hundred other people coming in after you. You are not special. That was one of the first times that I said to myself, 'Oh, this is going to be challenging. No one really cares about you unless you take care of you and look out for you. 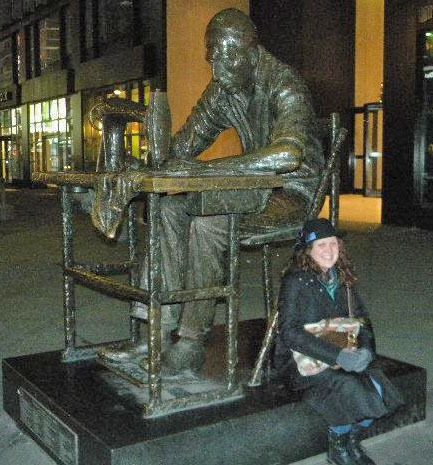 Drawing inspiration from "The Garment Worker" sculpture by Judith Weller.

She kept reassuring herself that things would be better when she got friends and money and not get so bogged down with thinking that everyone knew exactly what they were doing except her. Where was this map of hidden how to's? She had set out on this path because she wanted to do something good for the world through design, no matter how small. She had faith that somehow there was a purpose for her even if she didn't know what it was.

Eventually, she scored a job in sales for a button distributor in the garment district. Something she had learned about during her college internship at Michael Kors with a trim designer. It allowed her to leave roommate city and splurge on her own 300 square foot apartment in New Jersey. Everything she made went towards rent, transportation, and cheap food. She also had co-workers now, some of whom took her in, gave her advice, and invited her to family meals. There were people that cared. It was a start.

The Not So, 'Sex In The City' Experience


At one point the company she worked for began to have financial troubles and everyone's paychecks bounced. The financial stress and loneliness took a toll. When her family and friends from home called and asked what Broadway shows she had seen, she was appalled.

I would be a jerk and say, 'What! Are you kidding me! You have no idea!' There is this Sex and the City experience that people think NY living is, and there is [that], but for rich people not normal people. Normal people are taking two hour train rides just to go to a job that is giving you no money. [They] just go and are grinding not even making ends meet because everything is so expensive and no one has savings. I made a choice to never keep trying to figure out what I wanted to do.

Jamey needed to design. So, she got a vendor license and designed button jewelry from the Spanish and Italian "trash" buttons she had asked to take from her work. This became her side business on weekends. No one bought anything and she lost what she paid in booth fees. 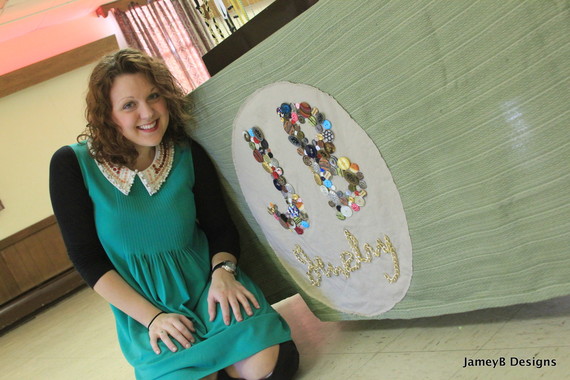 Never far away from her sewing machine she redesigned a wardrobe for herself out of the slash pile from sample clothing sales. Jamey realized that as the fashion industry moved to the speed of trends and seasons there was a long trail of "trash" left behind from the before, during, and after process. She soon learned that the discarded piles of clothing burdened landfills or developing countries. A vision was formed.

Her small apartment became a miniature warehouse of clothing the city's trendy left behind. She used the maps left behind by the seams of the original clothing to restructure pieces into new designs. Jamey finally felt motivated and alive only to end her five year NYC tour de force exactly how she started, without a place to live and with little money.

The company whose checks bounced laid her off. She used whatever money she had to get out of her lease and moved in with her boyfriend's family. In the midst of complete chaos she found her purpose and-- love.


Within a year of leaving NYC for her home town of Pocomoke, Jamey repurposed a forgotten beach rental with the help of her boyfriend and parents. She upcycled her street vendor business name and opened MamerSass, Reinvented Fashions, a thrift shop/textile recycling shop in Chincoteague, VA, a beach town smaller than Pocomoke and worlds away from the Garment District. 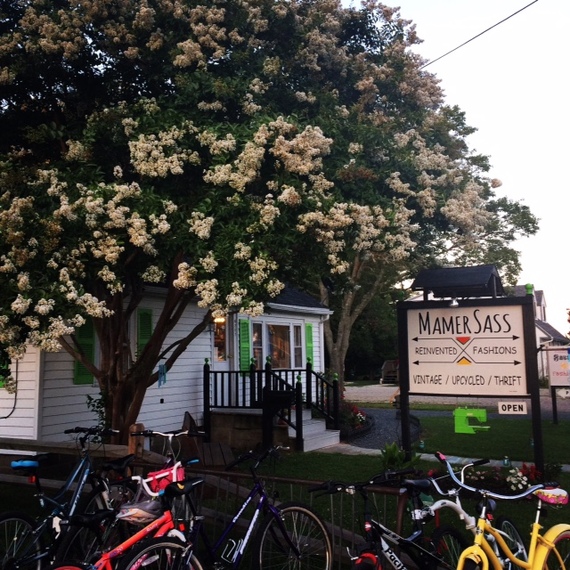 Located on Maddox Blvd., Jamey now works on the street all tourists must drive to get to the beach. Now the city comes to her. It is a much shorter commute!

Her first inventory was stocked from everything she had reinvented in her New Jersey apartment as well as donations from the local community, giving new life to thousands of articles deemed old and unworthy, headed to landfills. Her redesigns unveiled the unseen sass in each piece as she connected her Eastern Shore roots with her NYC awareness. 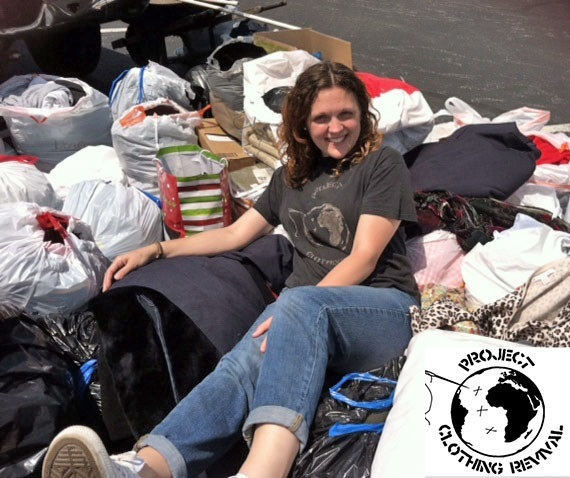 Everything she recreated sold that summer and every summer for the last three years. Tourists from NYC, D.C., and Baltimore seeking cool beach refuge from the scorching city streets snapped up her unique and eco friendly designs faster than she could design them.

This year, she is opening up her seasonal shop, year round online, in an effort to raise money to open up a local textile recycling facility through an Indiegogo Campaign.

Mamersass: Reinventing Our World One Garment at a Time from Jenny Roberts on Vimeo.

I was only in New York for five years but it felt like twenty. That is what stress does to you. But really every small job I did from working with manufacturers, supplies, vendors, designers and the skills that come with that like understanding mark ups, ordering, inventory, and marketing. I would have never known all that from a classroom. 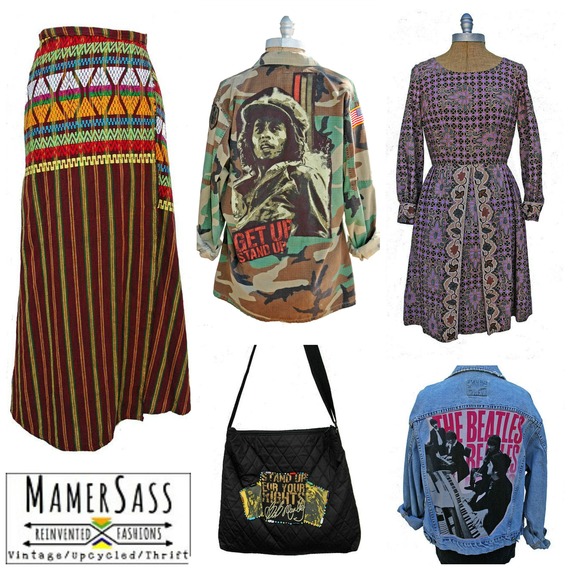 Her mission for the textile recycling facility is to take off some of the burden placed on women and girls in developing countries by reducing the waste from fast and cheap consumerism. 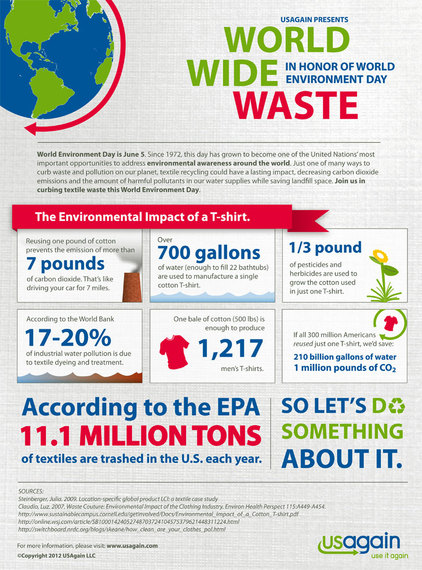 Jamey also aims to inspire college designers by having 'non sweatshop like' internships and sewing/textile recycling, summer camps for budding fashionistas who, like her, want to design an earth friendly future on their terms. 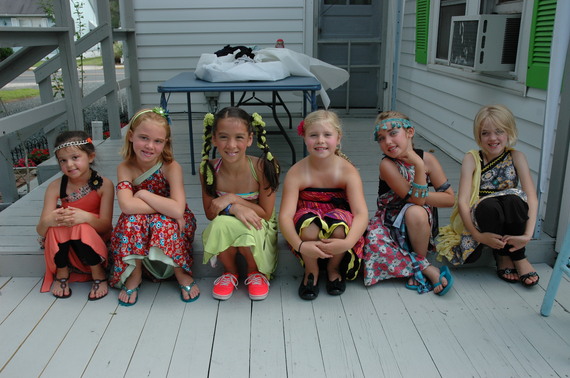 
More:
fashion designsex in the cityDesignnycStyle
Newsletter Sign Up
An essential daily guide to achieving the good life
Subscribe to our lifestyle email.
Successfully Subscribed!
Realness delivered to your inbox