Music can sometimes be the best form of therapy, and sometimes inspiration can grow out of your darkest hour. For Tyler Glenn, both have applied. It's been a rocky road and spiritual awakening for the Neon Trees frontman ever since he came out as gay in 2014. Last fall, the Mormon-raised musician was stunned when the Church of Jesus Christ of Latter-day Saints (LDS) initiated a new policy that those in same-sex marriages are dissenters and would prevent their children from being blessed or baptized. With that news, Glenn naturally felt abandoned. But sadness eventually gave way to liberation as he plotted his debut album fittingly called Excommunication, which he dubs "a break-up record."

Neon Trees collaborator Tim Pagnotta produced the album. In addition to his solo work, Glenn appears alongside such artists as Mary J. Blige, Britney Spears, and Meghan Trainor on "Hands," a musical tribute to the 49 victims of the Pulse Nightclub shooting in Orlando, Florida. I spoke to him recently on all of the above. Read on, and get inspired. Oh, and vote this Tuesday!

I'd imagine the last two years have been devastating in many ways. Tell me how your record has helped you through these troubled times.
There's been highs and lows and they have felt very extreme at times. I think being able to turn to music like I did when i was a teenager has helped me cope. Making records had become creative and exciting and was still an outlet, but instead of hiding things within the music, I decided to say it all within the music. It made me feel secure and safe when everything else around me felt a bit unsafe and a bit shaky.

So obviously it was therapeutic writing these deeply-felt songs...
1000 percent. I wrote songs that didn't even make the record that helped me through actual weeks worth of time. It was such a special and unique create time in my life. I would wake up and just write and write and get a little high and maybe eat some food and then just write and write. For weeks. I found strength in these songs.

Had you been planning a solo album for awhile. In other words, did you keep some songs in your pocket for your own stuff rather than performing them for Neon Trees?
I had about six songs prior to writing for this record. Its hard for me to even look at songwriting the same way almost. I try to look at this record and these songs as a very unique almost singular experience. I had plans to do "the solo record" thing but that felt irrelevant and unimportant when I started to feel like my own life was having a massive shift in perspective, and the life stuff bled into the creative stuff. So it's difficult for me to wrap my mind around any songs I had previously writing for my "solo" thing. I just feel less attached to them.

Truth. I always found the Neon Trees music videos to be a lot of fun. How important are music vids to you individually on this record?
The music videos for this record are incredibly important and the first time I've really gotten thoughtful commentary on a video I've put out. When i put out the video for "Trash", i was blown away. There were think pieces and reddit threads. I still get stopped in the street by strangers thanking me for the video and telling me their experience watching it. I love video's as an art form and especially when i can make a video that acts as an extension to the music. I love bunch of Neon Tree's videos, but It's been enjoyable to make grander statements within music videos with this music.

Tell me how you got involved in the "Hands" tribute.
It was very fluid and quick. I had been thinking only a few days after the Orlando tragedy that we needed to have a song with queer voices and artists. Like we needed our "we are the world" for this horrible thing. Justin Tranter (who wrote and pretty much spearheaded the entire project) is friend of mine and I was texting him and he basically was like "we're a step ahead of you and we want you involved an dee have all these giant pop singers on the record and please come" and I flew in to do it.

The day I did my vocals, RuPaul was there and was amazing and made everyone cry. The LA Transgender Chorus was there. The "spirit" or what ever you want to call it was definitely felt in that room and in that project.

Shifting gears, take any song lyric or song title, and tell me which one personifies this election.
I would say immediately what comes to mind is "The Joke Isn't Funny Anymore" by the Smiths. I don't feel that needs much explanation.

Lastly, can you impart some words of wisdom for my nearly two-year-old son?
I have a two-year-old nephew named Owen that [I'm] inspired by and obsessed with. Embrace every single moment of your young and innocent life. Enjoy every moment with your mom and dad. Enjoy every new taste and new discovery. Every time I'm around my nephew, I'm reminded that life can be simple and pleasurable and it's actually not so difficult to find inspiration in the tiniest moments. 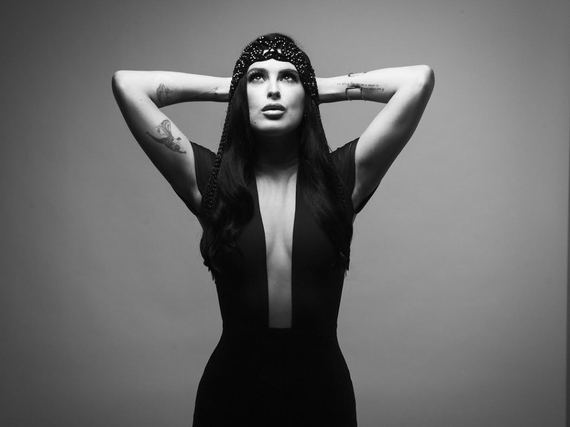 We move from the inspirational debut album from Glenn to another breakout by a rising artist. Rumer Willis - yeah, we know who her parents are - just launched her first-ever U.S. concert tour - "Over the Love," which showcases her jazz-pop cabaret style. We caught up with her following her first Northeast show at Fairfield Theatre Company's StageOne on Oct. 22.

Though it's her first tour, Willis, who recently wrote and recorded with hitmaking writer/producer Linda Perry, is no stranger to performing. She began singing at three years old (performing for her family), and joined a music conservatory in Idaho at 12 (studying opera). She continued her classical training at Interlochen Arts Academy. In 2014, she played the Sayers Club in Hollywood, and appeared as Roxie Hart in Chicago on Broadway last year. Not too shabby. She's also had a series of cabaret shows so it should come as no surprise that she decided to take to the road. A-Sides caught up with Willis recently and asked her about her own evolution.

You're in the midst of your first ever tour. What made you decide now was the right time to take your talents on the road? I imagine doing Broadway helped a bit?
I had been thinking about it for quite some time and now worked out to be the perfect time in my schedule.

You're classically trained and have been performing for quite some time. Was there ever any question that you wouldn't pursue music/acting as a career? Did any part of you want to rebel against your parents, and become, I don't know a professional elephant dresser in Sri Lanka? And yes, I had to Google that.
No. For me, there was never any doubt in my mind that I wanted to pursue a career that involved singing and acting. But, I can't lie. A career as a professional elephant dresser does sound intriguing.

It certainly does. You get the famous parents question a lot no doubt. I won't go there. But, I'd imagine your dad - a musician in his own right - helped foster that love for music. Did your mom as well?
Yes. Both of my parents did an incredible job of exposing me to amazing music but my father was definitely a catalyst.

You go from solely music to acting or actually a combination of both - do you have a preference? I'd imagine it's one in the same since you're putting your artistry out there no matter what.

No. There is no real preference. I love them both.

Linda Perry is worshiped in this industry. It's easy to know why but tell me firsthand why she's as respected as she is.
Because she's a genius musician. She knows how to bring out parts of an artist in a way that I've never seen.

Do you have any immediate plans to return to Broadway?
Not as of yet, but if something came up I'd definitely consider it.

Lastly, can you impart some words of wisdom for my nearly two-year-old son?
Don't ever let anyone tell you what you can or can't be, and never lose the magic of youth.