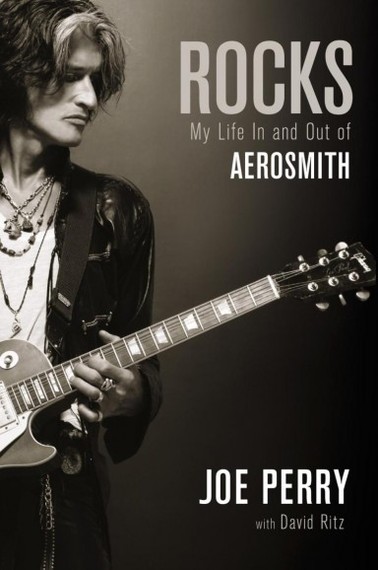 I can go weeks, sometimes months, and even a year without talking to my sister. When you're family, it can be like that. But, it's easily fixed in many cases once you reconnect, forgive and forget (or not really but move on anyway). With longtime friends the same can be true, and in the case of a band - especially one that's been around for ages, sharing tour buses, hotel rooms, and in many cases, partners, it's a definite dysfunctional family vibe. Sometimes bands break up over it, while sometimes they truck through the mess. There's love. Mick Jagger and Keith Richards often get into fistacuffs over "facts" in their respective autobiographies, and the same case can be made for classic rockers Aerosmith. Guitar God Joe Perry and frontman Steven Tyler have had their share of squabbles through the years, aired out the dirty laundry (sometimes in public), but they always return to the music.

That brings us to Perry's recently released (brilliantly written) autobiography Rocks: My Life In and Out of Aerosmith, a chronicle of the Boston native's upbringing, family life, and the sweet and sometimes not-so-sweet emotion that's come from Aerosmith's meteoric rise and staying power. Many stories, as you'd expect, clash with Tyler's 2011 memoir Does The Noise In My Head Bother You?, but Perry's totally fine with it. Tyler seems so, too (more or less).

"We just remember things differently. It's hard with personalities, especially two A-personalities. We're at two opposite ends of the spectrum, but we have a great affection for each other on some levels," the Aerosmith co-founder explained in an interview with A-Sides last month. "On the other side, we're always butting heads over music. But, we're going on 42 years now, and that's no small feat."

Perry's book has received critical acclaim since it's Oct. 7 release. It's also a smash hit and New York Times bestseller. Part of the reason, I'm sure, is just how honest it comes off. Throughout the book, which starts off with a foreword by Johnny Depp, are reflections on the good, the bad, and the ugly in his life starting off with his New England upbringing with supporive parents, and his obsession with the guitar. And obviously, he takes us through one helluva trip on how Tyler, Joey Kramer and Brad Whitford, and Tom Hamilton got their start, and how he and the band crashed and burned, but were able to resurrected themselves.

In the midst of an extensive book tour, Perry took time out to chat about his revealing Rocks, stops, drops, and rolls. Read and rock on.

You've spent your entire career touring around the world as a musician. Is a book tour more grueling?
Book touring is probably something you do once in your life and never again. It's probably one of the most grueling things I've ever done. Even touring back at 22, when I had all that youngster energy, it would've been really tough. Really hard. You're just so off schedule. When you're touring, you're on at 9 at night. With this, you're getting up at 5 a.m. so you can look halfway decent for the live morning shows. You have to be at the top of your game. And you're asked questions and it's five minutes if that. Then you're off doing an hour-long podcast, and you shift to a thoughtful 10-minute radio interview. And this goes on...then you have a book signing. It has made for long days. Being awake and on the ball at 7 a.m. in the morning - that's been the hardest. But, it's been a good two-weeks of blasting this.

I realize social media helps brings the fans closer to you and the band, but I'd imagine the book signings must be cool to face-to-face interact with your fans as opposed to a Tweet, right?
It's given me a chance to be more present. I'm so excited to be there. You can look people in the eye, and just be like "how are you doing?" It's a chance to be a bit more intimate. It's interesting though. You're signing books for people who haven't read it yet. With the whole wave of releasing an album, chances are most people bought it, and had listened to it already [when they see you live]. That's what makes it interesting. Fans have only had a chance to just skim through the book or not at all.

I know you get this a lot, but how did this book come about. Why was now the right time for it?
I've been thinking about doing this for quite a few years. I just never felt like it was the right time. You say "one more day" but they're always more gigs, or the studio. My career is always moving along. We're on the road all the time. It just is a more day-to-day thing, and I never felt it was time. But with the 40th anniversary of the band and our last record for Sony, and personal things that have changed in our lives - kids growing up - it felt like it was time. [The book goes up to] a year-and-a-half ago, and stops there. The band's certainly gone on, and there are more chapters I could've gone into.

A nice surprise with your book is how in depth you go into family. Overall, it was actually quite refreshing that the whole autobiography doesn't follow the typical "band autobiography."
I didn't want it to be like your average every [musician's] book that's put out. But, at the same time, that's their book and that's the way they wanted to do it, and that's fine. Talking about how many TVs they threw out the window. We've all read those stories. We talked about it in our first book. I just wanted to get it down to a level people could relate to: getting the celebrity part off the top, and looking at it underneath and how you deal with people. As a band, you're kind of family by choice. We don't have a choice. We have to keep the band together. That's what I wanted to say.

One of the reasons [I wrote it] was to show how hard it is to keep a band together. There's a reason why we're one of very few American bands with the same members as the day we started the band.

I know Steven and other members of the band have written books, and stories conflict. But, there's not maliciousness in your book - at least not really.
The bottom line is we're just entertainers. We started off having fun, and realized we could do something to add another link to rock and roll or blues rock. But, you can't take it too seriously. We're not curing cancer here. You kind of always have to keep a sense of humor. Certainly when things [go awry], it can hit as deep as anything in life. But, there's still this kind of...step back and say "wait a second I'm not going to let it ruin my day." You have an argument, but you hang it up and that's it. It's not very important. Human nature doesn't always let you work that way. Your instincts are always pushing and pulling. You can get put up in stuff. The learning process....it takes awhile. I had to leave the band to figure out my end of things. It's a long story.

Your friend Gene Simmons recently said rock and roll is dead. Do you agree?
Knowing Gene, he's a businessman as well as a rock star. I've known him for years and years and years. I'm sure he's looking at it like a businessman. And in terms of that, rock and roll is over. The golden age of rock and roll started in the 50s, into 60s, and it was a cottage industry. It exploded in the MTV years. You could have an average song and an average video and still sell a million records. My son told me there hasn't been a platinum album this year. (Note: Taylor Swift's 1989 did just that after the interview). It's just changed so much. The excitement fans feel when they see a band or listen to a DJ playing chronic music, you're still seeing the audience do now what they did 30 years ago.

Music unifies people. There's a tribal element to it. No matter what, they're listening to it. That part won't ever go away. How people get music is what's drastically changing. We're almost at the point where there's no reason to have record labels. They're still hanging on, and trying to adjust it. So from the business mechanics of it, we're definitely at the end of an era and the start of a new one.

Jon Chattman's "A-Sides Music" series was established in August 2011 and usually features artists (established or not) from all genres performing a track, and discussing what it means to them. This informal series focuses on the artist making art in a low-threatening, extremely informal (sometimes humorous) way. No bells, no whistles -- just the music performed in a random, low-key setting followed by an unrehearsed chat. In an industry where everything often gets overblown and over manufactured, I'm hoping this is refreshing. Artists have included: fun, Courtney Love, Air Supply, Bastille, Vance Joy, Alice Cooper, Echosmith, Charli XCX, Jake Miller, American Authors, Cold War Kids, Imagine Dragons, Gary Clark Jr., and more! A-Sides theme written and performed by Blondfire.