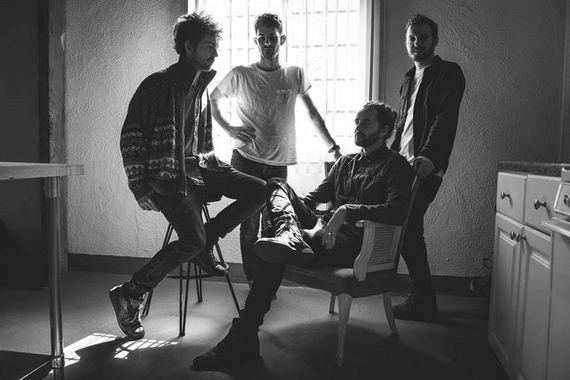 Two acts burning it up in the figurative and literal sense respectively sat down for a chat, and performed a pair of songs for A-Sides.

All summer long on alt-radio, The Moth & The Flame's first single "Young & Unafraid" has gained more traction than Lindsay Lohan rollerskating during a hailstorm on a street of ice. The song, which will be on their forthcoming album, has reached over one million streams on Spotify and has ranked in the Top 50 of alt-rock radio and placed on SiriusXM's Alt-Nation Alt-18 Countdown.

While they're breaking through this year, the Provo-formed and Los Angeles-based band have been around for a few years, burning miles on the road by opening for a diverse mix of artists that includes Jane's Addiction and buds Imagine Dragons and, most recently, headlining their own shows. In an age where it seems Dave Grohl is the only rocker mentioned in the mainstream (love the guy, but let's pay some more attention to the genre as a whole please) singer/guitarist Brandon Robbins, keyboardist/vocalist Mark Garbett, and former Imagine Dragons drummer Andrew Tolman are making some lyrically-weighty, accessible rock music that shouldn't be ignored. Again, it sure hasn't in the alt-music universe. Anyway, The Moth & The Flame were kind enough to chat and perform a pair of songs for A-Sides

So was a man called "firekid."

Yes, we move from "Flames" to the "firekid" himself Dillon Hodges. As a kid, I wanted to be a ventriloquist, but I gave up on it quite fast. The problem was I was terrible at it and rather than focusing on lifelong aspirations, I killed hours playing video games. That's the difference between myself and firekid. He always gravitated toward music (or is it the other way around?), and was really good at it. The Alabama native, who sings, writes, and produces, even won the National Guitar Championship at 17 -- the second youngest ever to do so. Naturally, firekid kept with the music thing, moved to Nashville to hone his craft even further, and it's paying dividends not just for him but for many earbuds.

Infusing southern rock with bluegrass and a hybrid of genres and gadgets (he uses chiptune -- producing music via old-school video consoles), firekid recorded his debut album with producer and songwriter Sam Hollander (The Fray, Train).


About A-Sides with Jon Chattman: Jon Chattman's music series features celebrities and artists (established or not) from all genres performing a track, and discussing what it means to them. This informal series focuses on the artist making art in a low-threatening, extremely informal (sometime humorous) way. No bells, no whistles -- just the music performed in a random, low-key setting followed by an unrehearsed chat. In an industry where everything often gets overblown and over manufactured, Jon strives for a refreshing change. Artists featured on the series include Imagine Dragons, Melissa Etheridge, Air Supply, Joe Perry, Alice Cooper, fun, Bleachers, Charli XCX, Marina and the Diamonds and Bastille.