We've all seen a homeless man on a street corner holding a cardboard sign that read something like, "Homeless Veteran... Can You Help?" We might have asked ourselves, "Could that sign be true?" The answer is yes!

While we know from the US Census 2000 Veteran Data that there are 26,549,704 veterans living in the US and Puerto Rico , we do not know the exact number of U.S. veterans who are now homeless. Estimates of the total number of homeless veterans differ greatly.

However, in 1996, The Urban Institute (UI) with the National Survey of Homeless Assistance Providers and Clients (NSHAPC) determined that of the 2.3 million to 3.5 million people who are homeless during the year in the United States, 23% or 529,000 to 840,000 of them are homeless veterans.

Regardless of the exact number of homeless veterans, there are two definitions that must be met in order for former military personnel to be classified as homeless veteran. First, a person must first qualify as a veteran for purposes of Title 38 benefits as one who has served in the active military, naval, or air service and was not dishonorably discharged.

Second, a person must meet the definition of "homeless individual" as established by the McKinney-Vento Homeless Assistance Act:

(A) a supervised publicly or privately operated shelter  designed to provide temporary living accommodations (including welfare hotels, congregate shelters, and transitional housing  for the mentally ill);
(B) an institution that provides a temporary residence for  individuals intended to be institutionalized; or
(C) a public or private place not designed for, or ordinarily  used as, a regular sleeping accommodation for human beings.

• nearly 95% of homeless veterans are male, while 5% are female

• 45% of homeless Veterans have some kind of mental illness

• over 70% of homeless veterans suffer from alcohol or drug abuse

• 67% served in the military for more than three years

While it is unfortunate that anyone becomes homeless, veterans are more likely to become homeless than civilians. Why is this? No one knows for sure.

For example, in "A Model of Homelessness Among Male Veterans of the Vietnam War Generation" from The American Journal of Psychiatry, authors, Robert Rosenheck and Alan Fontana pointed out that two military factors, combat exposure and participation in atrocities, contribute to "four post-military variables:

(4) being unmarried (including separation and divorce)

Thus, the study determines that it is these "four post-military variables" that can directly lead to homelessness for many veterans.

Combat-related post-traumatic stress disorder (PTSD), has been found not to have a direct relationship with homelessness. Further, it has also been found that homeless combat veterans were no more likely to be diagnosed with PTSD than combat veterans who were not homeless. 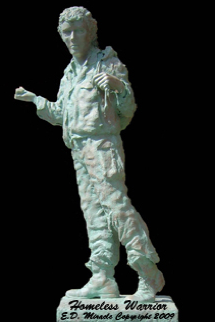 What is being done to help homeless veterans?

Since 1987, the VA has been the only federal agency providing hands-on assistance directly to homeless people. However, over the course of a year, the VA only reaches 33% or 100,000 of homeless veterans. Thus, 200,000 veterans must seek assistance from local government agencies and service organizations in their communities.

Homeless veterans may find additional assistance through programs funded by the U.S. Department of Housing and Urban Development (HUD).

On February 17th, President Obama signed the American Recovery and Reinvestment Action 2009 which included $1.5 billion for the Homelessness Prevention and Rapid Re-Housing Program (HPRP) through which grantees can provide services to prevent and house homeless people.

As we await the implementation of HPRP, possibly the most effective programs for homeless veterans at this moment are the 250 community-based, nonprofit, "veterans helping veterans" groups."

Pictured, in connection with this article, is the amazing sculpture, "Homeless Warrior," by legendary sculptor E.D., Miracle copyright 2008.