In the coming months, several African countries will be holding elections. The flurry of electoral activity marks progress towards democratic rule in a continent where, until recently, military coups were a common practice for the transfer of political power. Ideally, each of the polls would give legitimate politicians seeking office an opportunity to propose solutions to real problems, rather than encourage power hungry dilettantes to impose elaborate plans for solving imaginary puzzles.

An issue which must be at the top of the agenda of would-be-leaders is the lack of security, a common problem across the continent, contradicting the idea that youthful Africa is the next big investment opportunity, a "trending Zip code" on the world map. The preoccupation with security is illustrated by the recent election in Nigeria, where faced with a persistent existential threat from Islamic insurgents of Boko Haram and government security unwilling to stand-up to terrorism, the electorate turned out an incumbent president for the first time in its history. Without peace and security in Africa, average living standards will sink even lower than their current poor level, with negative externalities to the rest of the world. Responsible governments protect their citizens. The current climate of instability across the continent is a sign that too many African governments are failing at one of their basic duties. So, citizens are voting early, but increasingly with their feet, risking their lives in dinghies dangerously crossing the Mediterranean to Europe, desperate for a better and more secure future

Given the choice, Africans will reward with their votes leaders who are able to deliver sustainable security. I believe such leaders foster adequate growth and equitable distribution of its fruits, now and in the future. Such growth is achieved only if politicians put infrastructure at the center of their economic programs.

Unsecure, Poor and Unequal Africa: The idea of sustainable security in Africa is a wild dream given the nightmarish reports of civil wars, insurgencies, terrorism, poorly planned migrations, attacks on vulnerable segments of populations and environmental destruction. This year, so far, has followed a script all too familiar. Boko Haram attacks in West Central Africa; ISIS and other militant groups in Libya, Tunisia and Egypt; terrorism activity in Kenya; militants' attacks in Somalia; violence on poor immigrants in South Africa, perpetual chaos in the Democratic Republic of Congo; coup and unrest in the Central African Republic...

Lack of security is the result of conflicts often rooted in the despair of too many citizens unable to satisfy their economic needs and lead productive lives. When resources are scarce and people fear for their survival, the probability of social conflicts degenerating into scale violence increases. A skewed distribution of those resources exacerbates such conflicts with an additional dimension of injustice. Worrisome for Africa, conflicts prevent development of human and social capital resulting in more conflicts.

The case for a resources constraint in Africa is well documented. The level of poverty in the continent is highlighted in Table 1. The per capita income level adjusted for purchasing power to make international comparison meaningful is relatively low at the end of 2014, both for the whole continent ($5254.54) and its Sub-Saharan component ($3270.38). India (5855.31) fares a little better while China 12879.85) has a level income per capita of a country beyond poverty. 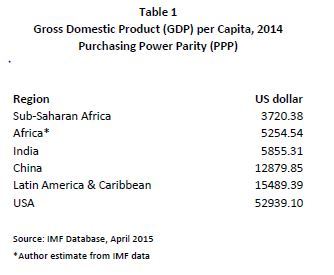 To make the situation worse, the distribution of income in Africa appears to be much skewed. Across countries huge disparities often linked to natural resources accessibility create regional caste systems. In the Custom Union of Central Africa for example, GDP per capita adjusted for purchasing power parity is as low as $607.17 (Central African Republic) and as high as $32266.35 (Equatorial Guinea). Within countries the, statistical measures of inequalities as reported by the World Bank show high economic inequality, the Gini coefficient which capture such disparities is usually high in Africa. In fact, South Africa, one of the largest economies in the continent is also one of the most unequal in the world with a Gini coefficient often above 60%. 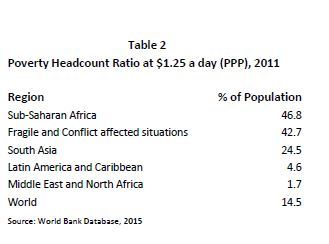 The continent is very poor and unequal. A shocking 46.8% of the population of Sub-Saharan Africa lives with a purchasing power parity adjusted income of a $1.25 or less per day with standards of living similar to those of a war zone (Table 2). Is there a reason to be hopeful?

Demographic Profile, Short-term Risk and Long-term Opportunity: Many analysts caution against too much pessimism based on current poor conditions. They highlight that, its demographics is a timely complement to an aging world, addition to natural an immense natural resource endowment and vast tracts of arable land. Land and natural resources have had little effect on the development of the continent so far the demographic argument is somewhat new.

Africa's population is growing rapidly. The percentage of young people is high, a contrast to other parts of the world where the population is aging very rapidly. Life expectancy already relatively low by modern standards has been affected over the last two decades by the aids epidemics, more virulent in the continent than in other parts of the world.

For now, too few adults support too many children. In other terms, the dependency ratio is too high. The current African young population presents other challenges. Rapid population growth increases the probability that wealth per capita is diminishes with time. High dependency ratio, overburdens adults and prevent them to train the next generation adequately. Low life expectancy exacerbates the shortfall in human capital which vanishes before full potential and intergenerational transfer. A young population, if frustrated by a bleak outlook, is hard to govern and eventually turns against political elite perceived as uncaring and ineffective. Such social conflicts exacerbate violence, insecurity and poverty.

In the long run however, the young population is a potential advantage in an aging world. But this is possible only if Africa is successful in a demographic transition leading to a higher proportion of working adults supporting lesser proportion of kids and senior citizens. Such transitions take time and resources. In fact, initial growth impulse precedes such transitions.

What to do in the Short to Medium-term:

In the short to medium-term Africa need infrastructure to generate growth. It is the "low hanging fruit" susceptible to break the dangerous cycle of low growth leading to conflict, and leading to lower growth in a vicious circle. Developing infrastructure opens opportunities to address unmet needs that such investments quickly transform in concrete demand. This is achieved by moving unproductive fighters from the war sector to civilian pursuits, like digging roads; and by resettling refugees into economic independence. Hopeful citizens trust their ingenuity and hard work. They build networks and accumulate human and social capital.

Doubling income from $1.25 to $2.50 per day for the less fortunate does not make them rich, but it is an immense boost expectations and Gross Domestic Product (GDP). The deputy Governor of the Central Bank of Nigeria declared recently that building a proper electricity infrastructure would boast Nigerian GDP growth from single to double digit for the foreseeable future.

In the nineteen century a subject of the United Kingdom with sharp business instincts named Cecil Rhodes envisioned building a railway from Cape Town (South Africa) to Cairo (Egypt). He believed such a project, will advance the imperial ambitions of his country while increasing his already immense fortune. His dream should be appropriated and actualized by the current generation of African leaders for the benefit of their constituencies.

African leaders and their allies must embrace a continental infrastructure project, a modern version of the Cape to Cairo railway. It will be a network of roads, railways, power stations and electricity distribution lines crisscrossing the continent. The power generation and distribution leg of the program would extend and improve initiatives such as Power Africa launched by President Obama in 2014. This is the time to do it, cost of capital has never been so low, the needs are immense, the potential peace dividend for Africa and the world substantial. What are we waiting for?

Dear would-be-leader, Africans want peace and sustainable security. You can deliver it if you grow the economy and help each prosper. Start with a good infrastructure program designed in conjunction with your neighbors.