Since its cyclical peak in 2007 - just prior to the financial crisis - the U.S. economy has grown by only 1.2% at an annual rate. This is down sharply from the 3.0% pace that had prevailed since 1990. The resulting cumulative shortfall now exceeds $2 trillion, or more than $6,500 per capita. Naturally, we all want to know why. And what, if anything, to do about it.

The textbook explanation is that the trend of potential output has slowed sharply. Potential output is a supply concept: In the long run, when all prices (including wages and interest rates) have adjusted, aggregate supply is determined by the available resources (capital and labor of various quantities and qualities) and by the technology that we use to convert these resources into output (in the jargon of economics, by "total factor productivity" or TFP). From this perspective, the conclusion is that, if U.S. growth has fallen for an extended period, it must be that there has been a slowing in the growth of the resource inputs, technological advancement, or both.

A relatively new, alternative hypothesis - proposed in 2013 by former Treasury Secretary Lawrence Summers - is that the feeble performance of the past decade reflects an unusually prolonged shortfall of aggregate demand rather than diminished supply. Summers' argument echoes a 1937 warning (renewed shortly after World War II) from another Harvard economist, Alvin Hansen. Three-quarters of a century ago, Hansen argued that the United States would be stuck perpetually in a situation with excess savings, with the result that a large portion of U.S. productive capacity would remain permanently underutilized.

Summers' account of demand-driven "secular stagnation" turns conventional business cycle analysis on its head. In macroeconomics or money and banking, textbooks (including ours) characterize business cycles as temporary deviations from the long-run path of potential output. These deviations are generally self-correcting: once prices and wages adjust to the new circumstances, equilibrium between demand and supply is restored and the economy returns to its long-run trend. Monetary and fiscal policy can promote stability by hastening this self-correcting dynamic, limiting the variability of growth and inflation.

This traditional story was a useful characterization of post-World War II business cycles; at least until 2007. Deviations of GDP from its long-run trend were moderate in scale and brief in duration. The deepest recession was the 3.1% peak-to-trough drop of GDP that lasted six quarters from November 1973 to March 1974. To be sure, there were periods of somewhat faster growth (from 1950 to 1973, and again, for a decade after 1994) and relatively slower growth (for more than 20 years after 1973). But, with the benefit of hindsight, we now see that these variations were modest.

But, as the first chart below shows, the period since 2007 looks very different. The pre-crisis trend growth of real GDP - measured as the annualized rate of growth from the cyclical peak in 1990:Q3 to the peak in 2007:Q4 - was 3.0%. Compared to an extrapolation of that trend through 2014, actual GDP is now more than 12% lower, and there is no indication that the gap will shrink. 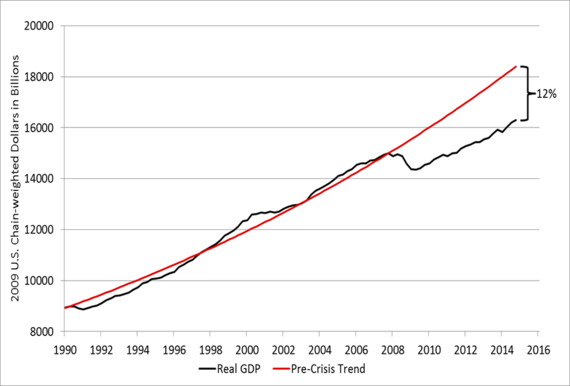 Not surprisingly, the standard response has been - gradually and reluctantly - to lower estimates of U.S. potential GDP as the chances of returning to the earlier output path dim. This is what you see in the next chart, which displays the vintages of potential GDP estimates from the Congressional Budget Office (CBO). The latest estimate of potential GDP for the final quarter of 2014 is nearly 10% below the CBO projection published in early 2007, before the financial crisis hit (see our recent post on uncertainty about the economy's trend growth). 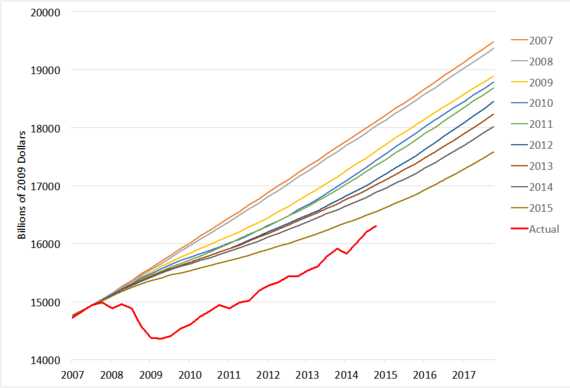 Source: ALFRED, CBO projections of potential GDP, and authors' calculations. All series are set equal at the cyclical peak in the third quarter of 2007.

There is a range of possible reasons to mark down U.S. potential output. The most compelling is the aging of the workforce: over the decade that began in 2012, the Bureau of Labor Statistics projects annual labor force growth of only about 0.5%, down from an average of nearly 1% over the previous two decades. Another concern is the declining dynamism in the U.S. labor market (measured by the gross flows into, out of, and between jobs) and in new firm start-ups (even in the vital tech sector). (See our recent post.)

Finally, measured productivity has slowed: the chart below shows that the increase in output per hour is low relative to the norm for business cycles since 1960. Productivity pessimists, led by Robert Gordon, argue that this is because the big contributors to U.S. productivity - things like the diffusion of electricity, indoor plumbing, the automobile, and higher education - all lie behind us. [Like Brynjolfsson and McAfee, we expect more from many new technologies on the horizon, but are reminded of Solow's 1987 quip that the computer revolution is visible everywhere except in the productivity statistics.]

Output per hour in the nonfarm business sector: evolution from cyclical peaks,1960-2014 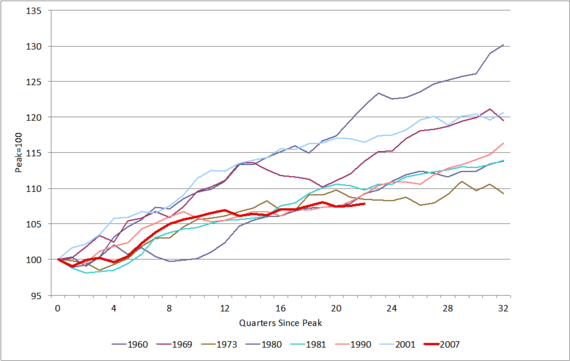 The demand-driven secular stagnation story shifts the focus. Proponents of this view argue that the real interest rate (the nominal interest rate less expected inflation) that prevails in equilibrium has dropped well below zero. If the actual real interest rate in markets (and set by monetary policymakers) persistently exceeds this "natural rate of interest," then people will spend (invest) less than would be consistent with the economy's potential. (See our recent post on policy and the natural rate.) As a result, the argument goes, aggregate demand will remain short of supply and inflation will tend to decline or stay low. Moreover, a persistent shortfall of aggregate demand can, itself, diminish supply, through the atrophying impact of unemployment on worker skills, through the depreciation of the capital stock, or through damage to intermediaries that allocate savings to the most productive uses.

Why might the natural rate of interest be unusually low? One possibility from the supply side is that slower productivity growth has reduced the expected return on assets. But it's hard to generate negative equilibrium real rates in this way. Secular stagnationists have proposed other possibilities. First, there is the possibility that high savings is driving asset prices up and expected returns down. Second, the cost of investment goods (think "software" versus "hardware") may be declining, reducing investment outlays relative to savings. Third, increased risk (or awareness of risk) following the financial crisis might be encouraging greater caution among providers and users of funds. Finally, the rise of income inequality could be shifting income to high-savings households, pushing down the average propensity to consume.

If, as stagnationists argue, the natural rate of interest is in fact well below zero, can economic policy still restore the economy's equilibrium by stimulating aggregate demand? Yes, but only by altering the policy framework itself. Take, for example, monetary policy. Many central banks today - including the Federal Reserve - aim for an inflation target of 2%. If that target is credible, the zero lower bound (ZLB) for nominal interest rates means the real interest rate cannot go below -2% (namely, the zero nominal rate minus the expected inflation rate of 2%). To reduce the real interest rate significantly further (beyond the limited cost of storing cash), the central bank could raise its inflation target. But many central banks likely would find it difficult to commit credibly to a higher inflation target. (As Paul Krugman put it in 1998, "monetary policy will be effective if the central bank can credibly promise to be irresponsible [our emphasis], to seek a higher price level.")

Another possibility would be a large and sustained increase in discretionary fiscal spending to absorb the savings glut and stimulate activity. Summers, noting the record low cost of U.S. government borrowing, the deterioration of the country's infrastructure, and the lack of federal investment (zero net of depreciation in 2013!), has argued for a sustained wave of increased public spending: "If now is not the moment to rebuild [New York's] airports, when will that moment ever come?" After all, infrastructure investment - if effective - increases both aggregate demand and aggregate supply.

There is also a fairly long list of structural reforms that can stimulate economic growth by expanding aggregate supply and raising the natural rate of interest in the process. For example, the VoxEU eBook on secular stagnation examines efforts to promote labor market efficiency, ease conditions for business start-ups, and improve education, among others.

So, can we distinguish between the supply and demand accounts of the ongoing growth slowdown? Is it primarily a story of slow productivity or of persistently negative real interest rates? The table below highlights some of the differences in these two perspectives. But accurately measuring the contributions of supply and demand factors to the growth slowdown isn't easy. Post-World War II experience - and our economics training - inclines us to doubt explanations of long-term growth patterns that rely on persistent shortfalls of aggregate demand. And there is considerable evidence that the natural rate of interest is above zero (see, for example, here). Yet, the Great Depression arguably was characterized by both an extended period of economic weakness and deficient demand, so it is natural to ask if the second deepest and longest U.S. cyclical downturn - the Great Recession of 2007-2009 - and the subsequent recovery display a similar pattern. 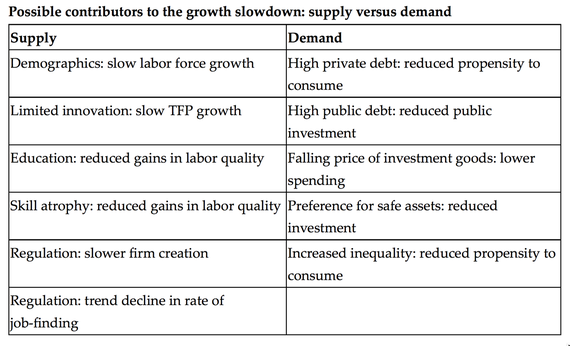 Perhaps the most useful test will be whether - after nearly six years of recovery and a tightening labor market - we will finally begin to observe a rise of wage and price inflation that signals the erosion of economic slack. If not, the case for secular stagnation will gain increased force. And, even if inflation does pick up, stagnationists likely will insist that the damage to aggregate supply came from a failure to address the demand problem in a timely and vigorous way.
Stay tuned!

An earlier version of this post first appeared on our blog at www.moneyandbanking.com.