There is a problem. With all this action, it's very tough for me to stop doing stuff long enough to write down what I've been up to. Each day is jam-packed with vivid images and amazing experiences. Yesterday, we did a marathon sightseeing blitz of the tombs and temples of the west bank of the Nile -- the dazzling necropolis where the sun sets and where, in pharaonic times, you buried your dead. Today was spent in Luxor on the east bank -- where the sun rises and people live. Here's a quick review:

Up early in order to see more village action, we rode a horse carriage from our hotel to the village of Al Gawahra. At first, teetering atop my carriage riding shotgun with the white-turbaned driver, marveling at how the horse navigated the roundabouts with all the cars, motorcycles, and other animal-powered vehicles, I thought it would have been more efficient to take a taxi. But leaving the commotion of the big city and entering the dirt and mud-brick world of the village, I realized the wisdom of a horse and buggy.

The idyllic, Biblical-flavored mud-brick villages I remember from earlier visits to Egypt are now changing with the advent of cheap concrete and modern bricks. But the fabric of village life survives -- sustenance living, camels out back for their medicinal milk, proud graffiti over doors boasting of trips to Mecca, loaves of bread dough rising in the sun with swarms of flies fanned away by little girls, and so on (more on village life in my next entry).

Returning to Luxor we crossed lush farmland of alfalfa, sugar cane, and wheat, with irrigation ditches reminding me of how Egyptians harnessed the Nile thousands of years ago.

Just as my arms were getting sunburned, we arrived at the Luxor Museum. It was good to follow up the outdoor sightseeing of yesterday with a visit to the French-designed and funded Luxor Museum. With a far better display than anything we've seen so far, it felt like a wing of the Louvre. The art...wow (more on that in a later entry).

After the museum, we climbed upstairs in a breezy café to enjoy a kick of caffeine and gaze across the Nile at all those temples and tombs. I relished a cold Coke. I never drink Coke, but here I find it's my little escape. There's no question about the water quality or how clean the glass is, and it's cool, carbonated, and gives me that caffeine jolt. 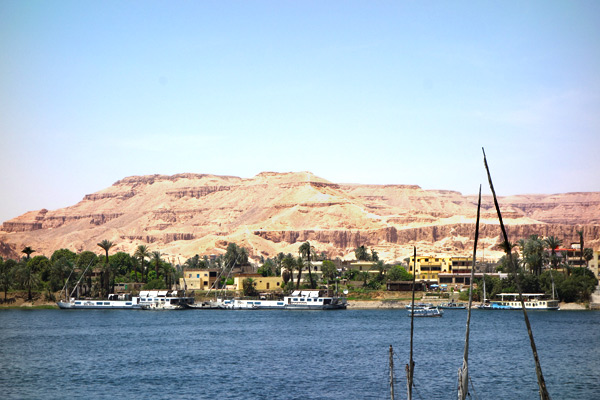 From the town of Luxor, cafes offer stunning views of the river and the tomb-filled folds of the desert hillsides beyond.

Walking along the riverfront corniche, the pride of Luxor, we hopped aboard the rusty and well-worn old ferry in which local workers commute back and forth across the Nile. I have vivid memories of this ride from my visit here as a student. For the four of us (two locals and two tourists -- who pay four times the local rate) the round trip was 5 Egyptian pounds (just under a dollar). The Nile was abuzz with various ferries and pleasure craft. I just wanted to take the ride for old times' sake, before the bridge made the ferry ride optional.

For lunch, my guide insisted we go to the Steigenberger Hotel. As usual, his vision was right on -- a club sandwich under an umbrella with a breeze on the riverside. Oranges are particularly sweet in April, I'm told.

Feeling lazy and acting like we're on vacation, we returned to the hotel for an hour of poolside relaxation. I have yet to see an American, however, the poolside of our Winter Palace hotel (literally a former palace) is lined with German and French guests doing what you do in the middle of a 100-degree day -- take a siesta poolside on chaise lounges in your hotel's garden. Gazing at the palm trees swaying in the breeze had a tranquilizing effect. We eased ourselves into the solar-heated yet wonderfully chilly water and then settled back into our horizontal state, eyes closed, with towering yet graceful palms fanning our travel dreams.

Late in the afternoon is prime time for a felucca ride. For $50 a tourist can hire a private boat with a captain and mate for an hour's sail on the Nile. Locals would pay half that. It's one of the must-do activities in Egypt for me. The breeze filled the hand-stitched sail, the mate brought me my mint tea with lots of sugar, and we moved with the wind -- surrounded by the breeze and sounds of the river, the creaking mast, and distant birds.

Cap your busy day of temple and tomb visits with a breezy sail on the Nile in a traditional felucca. For $50 you get an hour on the river and a lifelong memory.

The sinking sun turned palms into silhouettes, and throughout the valley minarets came to life with their calls to prayer. The cacophony of classic Arabic song warbled throughout the Nile Valley, and reminded all that there is one God and he is great. Combined with the intensity of the history, nature, gentle people, and complicated economics and politics of today, it all came together to make the presence of God particularly vivid. So far from home and so touched, you realize God is everywhere.

As we sailed, egret birds sprang from the reeds, the barefoot mate climbed the mast effortlessly, and children traced the shoreline -- their water buffalo in tow. The range of brown peaks on the western horizon marked the beginning of a sandy wasteland that stretches from here all the way to Morocco's Atlantic coast. I doubled my pillow, lay back, put my camera away, and savored the moment -- sailing the Nile. 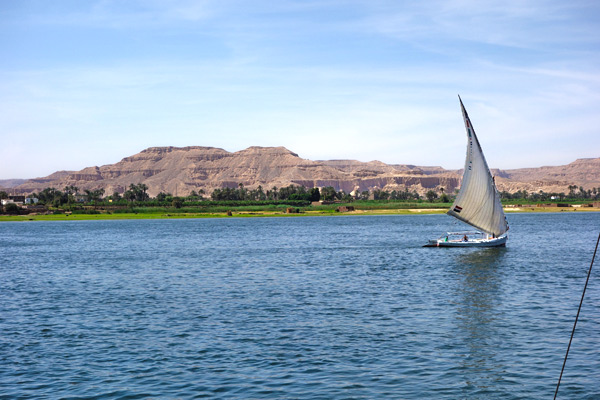 One of the great experiences in Egypt: a romantic felucca ride on the Nile at sunset. Photo by Trish Feaster (for her Egypt blog, see http://thetravelphile.com)

Hopping a taxi, we ventured back into Luxor town -- with half a million people, it is charming compared with Cairo and Alexandria. We rambled and explored as is so enjoyable in places like this. Popping into the train station, I enjoyed déjà vus of my two previous visits (when I overnighted on the train from Cairo). Today, the bus is much cheaper and flying is far more reliable. With the relative chaos following the revolution, trains are often delayed by demonstrations on the tracks.

We walked the long market street -- first half touristy, last half wild and very local. I let myself become a shopper, and Trish and I visited a jeweler to design a bracelet for her featuring a cartouche with our names carved on it in ancient Egyptian characters. We returned 45 minutes later and it was expertly done. While I paid an inflated price, it felt good to leave a little money in this hungry-for-tourism market.

And to cap the day we joined the boys at a bar for mint tea and sucking on the shisha -- the big bong-like pipes men hang out to smoke. Trish and our guide enjoyed taking in the apple-flavored tobacco. But I just couldn't -- I have a physical defense against tobacco. (I enjoy the hubbly-bubbly in Turkey where it seems it's just the sweet and easy-to-smoke dried fruit, but here the tobacco is strong and unavoidable.) The vibe of the shisha bar was wonderful, with everyone chilling out under posters of Oum Kalthoum, the musical diva of the Arab world who was long everyone's favorite Egyptian.

As we left, I dropped into a cobbler with posters in his shop celebrating Jesus with a Hindu-esqe flair. Troubled by recent mob violence against Christians in Egypt, I wanted to ask him what it was like to live and work in this Muslim world as a Christian (see earlier posting).

Rather than catch a cab home, we walked. I got the feeling that the dark side streets were dangerous -- just as they can be in poor neighborhoods in any big city. We stuck to the busy stretches. Just before midnight, children were playing in pools of light while their fathers closed up shop. The breeze was cool. And the curbs were high -- which I noticed more than ever with my tired legs. I think they were made that tall to keep cars from jumping them for a free parking spot.

As we stepped through our hotel's circa-1930 revolving door -- and the security gate that always buzzes but no one cares about -- one of the Winter Palace's uber-attentive staff said, "Welcome home." I think, "Just another day (my last of 10) in Egypt."

Tomorrow we fly to Israel.

People ask me why I travel so much. This day is a good example of why I enjoy a day on the road even more than a day at home. Thanks for sharing it with me.