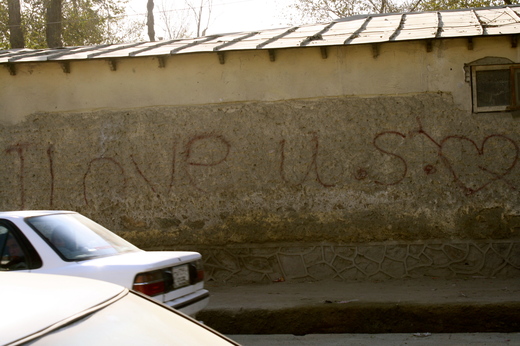 I went to Afghanistan. I went there as a tourist, a single woman, unaccompanied, unguided and unsponsored by any sort of group, government, corporation or organization. I had complete control over what I experienced. It took me six years to save up enough money for the trip. I'd been longing to make this trip for soooo long. But to be honest, right up to the moment I boarded the plane, I was petrified. I put my affairs in order, sent my sister an "in case of catastrophe" letter, gave my cousin access to my bank account -- in case of catastrophe -- purchased med-evac travel insurance and bought and brought every conceivable survival gadget, including a bulletproof vest (never wore it) and shrapnel collar.

Much to my surprise, I found that Kabul is no longer a war-ravaged city of rubble. Today it is a massive construction zone. The newspapers and TV never tell us how normal life there is -- well, normal for Afghanistan. Like other busy cities, traffic is a gridlock blob, yet eccentrically Afghan. Along with the crush of cars, rickety donkey and horse carts are still a frequent sight. Traffic circles are common, adorned with sculptures that celebrate everything from bushkazi, Afghanistan's fierce and ancient form of polo, to its mineral resources. They occasionally work as designed to maintain a constant flow of cars. More often, traffic cops along these roundabouts work diligently to defeat the circle's purpose. And sometimes, despite the fact that there actually are traffic laws in Afghanistan, people drive the wrong way along the newly paved boulevards -- just cuz. But that's the delightful chaos of Kabul. Since I wasn't driving myself, I didn't mind. 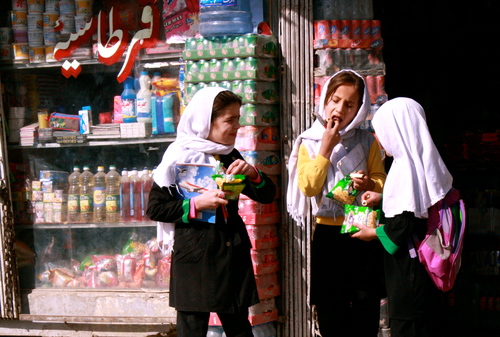 Every afternoon little and big girls, uniformed in skinny black trousers, knee-length coats and white head scarves pour out of school, joyfully filling the city's streets. These adorable Afghan Madeleines crowd around street vendors and into shops for after-school treats. I still grin at the thought of them. Not so long ago, this daily dance was impossible. During the Taliban years, not only was girls' education forbidden, but any woman or girl caught making noise on the street risked being whipped, even if that noise was merely the click of her heels on the pavement. Malala Yousafzai's tale of tragedy and triumph is a graphic reminder that, across the border in Pakistan, the Taliban hasn't changed a wit. 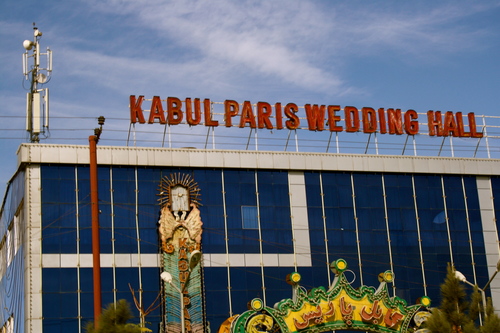 Kabul is a vibrant explosion of brand new apartment buildings, offices, shopping centers, big gaudy houses with clown-colored Corinthian columns and Vegas-on-acid wedding palaces. During the month I was there, nearly every street in Qala-e-Fatullah, the neighborhood where I stayed, was repaved (thanks to a grant from the Japanese government). With the 2014 US/NATO military withdrawal date hanging like a Sword of Damocles over their heads, Afghans have been working feverishly to make hay while the sun shines. East of the Durand Line, their great enemy, Pakistan, is devilishly depopulating its border region, in what appear to be preparations for a post-NATO Taliban re-invasion. Afghans are very polite people, but I wanted to know truthfully how they felt about the American presence in their country. As a way of giving them permission to speak freely, I would open any conversation on the state of their nation by saying, "Many Americans believe we're only here to steal Afghanistan's resources."

Every cab driver, shopkeeper, aid worker, shoeshine boy, butcher, baker, furniture maker, responded to my statement with a sweep of one arm and a variation of, "Look around you. None of this would be possible without Amreeka!" One cabbie gleefully declared, "I love Amreekans! And I love Germanians and French. I don't like British."

The favorite scratching post of the "stealing their resources" theory is the proposed Trans-Afghanistan Pipeline (TAP). The TAP was conceived during the 1990s as a way of transporting natural gas from Turkmenistan to Pakistan. Years before the TAP was even a twinkle in oil giant Unocal's eye, negotiations for another pipeline were well underway. The Iran-Pakistan-India Pipeline (IPI), sometimes called the Peace Pipeline, was first conceptualized in 1989. Pakistan and Iran finalized their end of the deal in May 2009. Though Pakistan continues to struggle with financing for its side of the project, construction on Iran's section of the pipeline is complete. All of which explains why, though a former Unocal employee has occupied the Afghan presidency since 2002, the TAP remains un-begun.

The most valuable natural resource in Afghanistan is copper. The Aynak Valley, where Al Qaeda members trained for the September 11th attacks, is home to the world's seventh largest copper mine. A large armed force (such as America's) could easily have taken possession of such a treasure, if that were the goal. But in 2007, the China Metallurgical Group purchased a 30-year lease on the mine from the Afghan government for $3 Billion. That's China, not the United States. My driver for the first week of my stay was a young engineer who'd taken a few days off from his job at the Ministry of Mines to help me. When I tried my 'stealing their resources' line on him, he rolled his eyes and exclaimed, "It doesn't even work that way! We make properties available through an auction process. Sometimes the winning bid is by a German company or Chinese, American or Afghan company, whatever."

No matter how many ways our military helps them -- rebuilding roads, schools, hospitals; protecting girls and women; taking them to shelters when the Taliban horrifically abuses them; knowing full well how much Afghans have, would and will suffer without the U.S./NATO to provide security against constant attacks by the Pakistani Taliban, an astonishing number of people in "Amreeka" nevertheless oppose any American military presence in Afghanistan.

Sometimes our military makes mistakes. Sometimes they are tricked into making mistakes. Sometimes we do beneficial work for selfish reasons, and sometimes our policies are bad or just plain stupid. But far more often the thousands of men and women from the 50 nations participating in the ISAF Coalition are performing vital assistance, rebuilding and protecting a nation that, from 1978 to 9/11, was completely demolished. It's the inability to accept that all of these things are true that makes groups such as Code Pink and Robert Greenwald's Brave New Films so easy for Pakistan's Inter-Services Intelligence Directorate (ISI) to manipulate. Such anti-war activists cling to the narrow Vietnam era mind-set that if the U.S. military is involved with something, then whatever it is must be wrong.

By contrast, people directly involved in the progress of Afghanistan, such as Esther Hyneman of Women for Afghan Women, believe, "The United States has an ongoing duty to protect, defend and rebuild Afghanistan." Hyneman knows only too well that post-2014, her organization's battered women's shelters will be facing a steeper uphill struggle. This was made frighteningly clear in early 2011, when, under pressure from a well-known radical Muslim cleric, the Karzai government came whisper close to passing a law for government takeover of all shelters in Afghanistan. The law would have denied shelter residents the vocational training and legal counsel they now receive, and would have mandated that residents be released into the custody of any family member who claimed them, including their batterers. Disaster was averted at the 11th hour when Secretary of State Hillary Clinton released an emphatic 'don't even think about it' statement.

America's hands are far from clean with regard to Afghanistan's demolition. During the 1980s, American policymakers (in particular the late Congressman Charlie Wilson, under the palm greasing flow of a generous interest in Pakistani petroleum) allowed ISI to control billions of dollars in aid intended for refugees and the Afghan anti-Soviet resistance. ISI used that financial and material control to empower virulent fundamentalists, many of whom continue to bedevil Afghan civilians, such as Jalaluddin Haqqani (the Haqqani Network) and Gulbaddin Hekmatyar (Hezb-e-Islami Gulbaddin, a/k/a HIG). Both are reviled for killing more Afghans than Soviets during the 1980s, and last year Hekmatyar personally threatened Britain's Prince Harry.

The streets of Kabul are crowded with Afghan police and Afghan soldiers. I didn't have the credentials to get onto the military base known as the Green Village. Thus the only place I saw ISAF soldiers was out of uniform at Kabul International Airport. Most of my interactions were with Afghans, but I did meet a few contractors; no, not Xe mercenary types, but rather, a wily blonde Australian accountant, a waifish but fearless brunette American computer tech and a mild mannered middle-aged American construction manager. In their company I learned that Kabul has some terrific restaurants. I dined with the girls at place called Sufi, sitting Afghan style on cushions at a low table, where we stuffed ourselves on delicious fire roasted flat bread, kadoo borani (a scrumptious pumpkin, yogurt and mint casserole), mantu (seasoned egg and meat dumplings), beef stew and sautéed spinach. Afghanistan: come for the heritage sites, like Mazar-e-Sharif's magnificent Blue Mosque, stay for amazing cuisine.

I can't say enough nice things about my hosts and hostesses at Canadian Women for Women in Afghanistan. For half the price of any hotel, I stayed in a comfortable apartment, where I slept on a king size bed, exquisitely hand-carved by a master Nuristani furniture maker. I had my own sitting room for entertaining guests, a cozy kitchen with a gorgeous view of the mountains and great WIFI. At sunset, I would stroll onto the terrace (big enough for a mid-sized wedding) and watch flocks of pigeons swoop around and about the rooftops of Kabul.

When you read about violence in Afghanistan, take note how often the targets are engineers, doctors, teachers, schools, students, construction workers, journalists, civil society projects, etc. Their enemy (Pakistan) wants to keep them crippled. I can attest first hand that the Afghan people are profoundly grateful to the United States and to our men and women in uniform, who have devoted countless hours of hard work for the defense and resurrection of their country. Everywhere I went in Afghanistan I was greeted with smiles and expressions of gratitude because I am an American.

Filmmaker and member of the Fieldwork International Group