Have you ever visited a doctor or a dentist and been given something to relax so whatever it is wouldn't hurt as much?

On one of those visits a few years ago I relaxed so much I fell asleep. It wasn't a deep sleep. It was so light, in fact, I realized I was asleep -- and I knew the whirring I heard probably wasn't the equipment. It was me.

When I came to I was embarrassed at being caught snoring.

My doctor corrected me. "You were purring," he said.

Can you imagine how often I smile about that? It reminds me that no matter what happens, there's probably a way to frame it more gently. 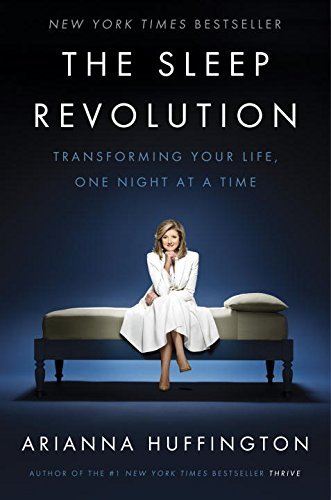 Call it purring, call it snoring, call it whatever you want. Never in my wildest dreams -- or nightmares! -- did I imagine talking about it with Arianna Huffington. But Arianna had written a book about sleep, I hadn't covered that topic on my radio show, and she agreed to join us as my guest.

That's when the trouble started. I wanted to make the hour fun for Arianna, but how? She'd been working tirelessly on book promotion. I couldn't imagine posing her a question she hadn't already fielded dozens of times. So I did what I always do. We talked about her book through the lens of my personal experience.

I was happy to thank Arianna for inspiring our daughter, Katie, to stop sleeping with her phone. Katie's in college in Manhattan. As a freshman she attended a presentation Arianna gave at NYU -- and said it inspired her to unplug more, read more books, and get more sleep. As if she hadn't hadn't heard those suggestions from her parents all the time. But you know how it goes. Prophets get no respect at home, especially if they happen to be your parents.

Arianna loved hearing she'd helped, suggested Katie get in touch with her about bringing The Sleep Revolution to NYU, and replied personally to Katie's message when she did.

How gracious. That's what struck me as the hour with Arianna flew by. Early in the interview Arianna told me she loved what I'd said in an interview: "Give me enough sleep, a good cup of coffee, and I can't wait to tear into the day and try to make something happen." She said she feels that way, too. I could hardly believe my ears. It was a little distracting, actually. I didn't know if Arianna had read up on me or had people who'd read up on me. It didn't matter. She made me feel like I had something to add to the conversation.

Not only that, but she asked Darrell and me about our sleeping arrangements. Do we sleep in the same bed? Of course. How's that going? Fine, except for the snoring. I mean purring! I purr more than Darrell does, and Arianna asked him if he used earplugs. He doesn't. He wants to be easily awakened, he explained, if there's an intruder. He's intent on keeping me safe, even in sleep.

Interesting. I had no idea.

Did I mention how gracious Arianna is? It was obvious we had her full attention. We weren't competing with her phone, and she'd had (you guessed it) plenty of sleep the night before we talked.

I told Arianna how childlike I am when it comes to sleep. If I haven't had enough, nothing good happens. I used to feel guilty about that -- but after reading Arianna's book, I don't. Humans need sleep. We aren't machines, Arianna pointed out. The goal is not to minimize downtime.

Did you catch that?

We aren't machines. The goal is not to minimize downtime.

I can't get that out of my mind. It's changed my whole outlook on life. I used to think I should have more to show for myself for my age. I remember thinking that in the third grade -- I know, what a fun little kid I was! -- and it's like an app that runs in the background of my brain but can't be disabled. It's a low-grade but constant anxiety I'm not making the most of my time on the planet.

"Is there such a thing as making it?" I wondered in a post about how Darrell and I work together 24/7 without even the occasional urge to kill each other. Suddenly I'm reminded what I went on to say: "Can it be any more fun than doing it? Maybe we aren't entirely sure where we're going. Who cares? We're having so much fun getting there! What I feel the best about is how much laughter there is in this house."

The more sleep we get, the more laughter. I got plenty of sleep the night before I wrote this post, and we laughed a lot more that morning than we did on the previous one -- when I was coming off (get this) only a quarter of an hour less.

Working together may not be hazardous to our health, but sleeping together might be! Arianna made me wonder if we should make use of the spare bedroom (Katie's) once in a while when she isn't home. Not as punishment -- the way we joked we use it but really don't -- but as a reward. A little retreat. Every time one of us snores (purrs!) or gets back into bed after a trip to the bathroom or even adjusts the covers, the other's sleep is disturbed. What if we took a break from that once in a while? Who decided sleeping in the same bed meant you were more in love? I mean, really. Who?

Arianna hasn't sold me on using the spare bedroom. Yet. But she's tickled my imagination. And that's what I want most from the talk show. I want my imagination tickled. That's how you start a revolution, isn't it? You start by imagining it.

Listening to the interview is a great place to start.