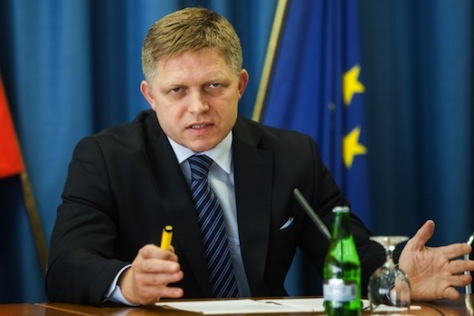 These days we expect elections in East Central Europe to be bad news for liberal democracy. In 2014 Hungary re-elected its strongman Viktor Orbán, despite the fact that he had transformed his country into an illiberal democracy, and in 2015 Poland brought back Law and Justice (PiS), the party of Jaroslaw Kaczyński, who has been praising Orbán's "Budapest Model" since 2011. Not surprising, then, that the elections in Slovakia were expected to bring similar bad news, in the form of the re-election of controversial Prime Minister Robert Fico, possibly even giving him a constitutional majority - which had allowed Orbán his constitutional revolution in 2010-2014. But Slovakia shocked in another way.

As in most European countries, particularly in East Central Europe, the refugee crisis is the main political issue in Slovakia, generating heated actions and discourse. Fico has taken a hard stand from the beginning, echoing Kaczyński, Orbán and Czech President Miloš Zeman in an openly Islamophobic campaign against both the refugees and the EU's attempt to redistribute refugees. Although the leader of a (nominally) center-left party, Direction-Social Democracy (Smer-SD), Fico has a history of nativist statements, mostly against Roma (so-called "Gypsies), which have landed him in trouble with his European allies in the Progressive Alliance of Socialists and Democrats (S&D). Despite threats from S&D to censure him and his party, Fico doubled down by making various Islamophobic statements and threatening to take the EU to court over its refugee plan. He even went so far as to say that he wanted to put every Muslim in Slovakia under surveillance!

Surprisingly, Fico's nativist campaign did not help him in the elections. Based on the preliminary results Smer-SD is the big loser of the election, winning just 28.3 percent of the vote, a loss of 16.1 percent compared to 2012! Clearly this is not because of a lack of support for his anti-immigration positions within the Slovak population. Even before the refugee crisis hit Europe, Slovaks belonged to the least positive towards foreign immigration within the EU and, given the various mass demonstrations in recent months, that situation will not have changed for the better.

But the demonstrations did not just bring people together to voice opposition to immigrants in general, and Muslims in particular, they also gave a platform to a variety of far right activists and groups. The most visible was Marian Kotleba, former leader of Slovak Brotherhood, a neo-Nazi party that was disbanded by the Supreme Court. Kotleba has since bounced back, founding the extreme right People's Party of Slovakia (ĽSNS), and getting elected governor of the Banská Bystrica Region in 2013. Kotleba and ĽSNS were very active and visible in the anti-immigration demonstrations in Slovakia and were rewarded with 8.0 percent of the vote (an increase of 6.4 percent). Even more shocking, ĽSNS was the biggest party among first-time voters, attracting a staggering 22.7 percent among 18 to 21 year olds!

In addition to the new extreme right ĽSNS the long-established radical right Slovak National Party (SNS) returned to the parliament. This is in itself amazing, as it is the second time the SNS gets back into parliament after having lost its representation in the previous election - a rare feat in any country, but a unique accomplishment in highly volatile East Central Europe. Its 8.6 percent is an improvement of 4.0 percent over the 2012 elections, but is actually slightly lower than what the party had been polling before the refugee crisis erupted. This seems to indicate that SNS was overshadowed by the more activist and extreme campaign of Kotleba and his ĽSNS. In fact, the new leader of SNS, Andrej Danko, had opted for a more moderate image, which nevertheless included a strong anti-immigration position. This might explain the party's poor performance among first-time voters - a mere 5.5 percent of 18-21 year olds voter for SNS.

Despite Fico's loss it is doubtful that he can be ousted from power. Two center-right parties have won, but not that much. The liberal but soft Eurosceptic Freedom and Solidarity (SaS) gained 12.1 percent, up 6.2 percent, while the conservative Ordinary People and Independent Personalities (OĽaNO) won 11.0 percent, an increase of 2.4 percent. They are nowhere near a parliamentary majority, possibly not even with the support of all the other centrist parties: the pro-Hungarian minority party Most-Híd, which lost slightly (from 6.9 to 6.5 percent), and the new centrist party Network (Sieť), which disappointed with just 5.6 percent.

While Sieť did not do as well as expected, it might have an important effect on the former party of its leader, Radoslav Procházka, the Christian Democratic Movement. KDH has been represented in Slovak parliaments since independence and came second in the 2012 elections with 8.8 percent of the vote. They lost 3.9 percent, gaining 4.9 percent, just under the ruthless 5-percent threshold. Hence, they will no longer be represented in parliament.

This leaves the new party We Are a Family (Sme Rodina) of controversial businessman Boris Kollár, which won a surprising 6.6 percent of the vote. This father of nine children with eight women has remained vague about his party's ideology and strategy, merely stating, "I want to protect my family and also your families from danger from within and without." This seems to put him closer to Smer, or even the far right "opposition" of ĽSNS and SNS, than to the centrist opposition.

In other words, while Fico might be weakened, liberal democracy has not been strengthened in Slovakia. Anti-immigration Slovaks have preferred the most extreme voice over the many quite radical voices. Fico is still in the driver seat to remain Prime Minister, but he will have to construct a coalition, which might turn out to be one of his most formidable challenges in his long political career.

This article has been updated on Sunday, 6 March 2016, 9.45 EST. Most notably, results from the first exit poll have been replaced with those from the preliminary results.