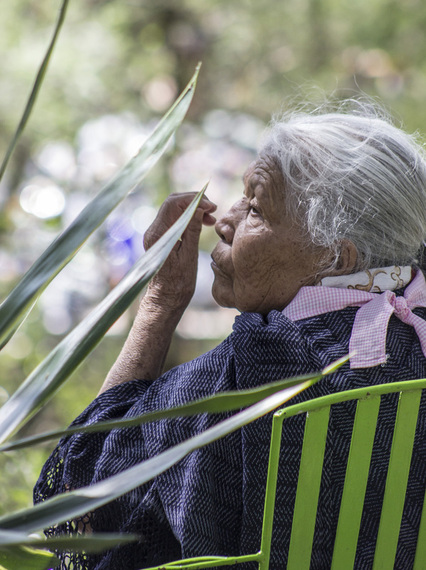 Today, I was sitting in Mesa Grande, the cafe I most love to frequent in San Miguel de Allende, when I noticed an old, weathered woman entering the place. Dark-skinned, wrinkled, and small, she was moving very slowly across the room, more like shuffling than walking, stopping at each table and attempting to sell whatever it was she was carrying in her gnarled left hand.

Averting my eyes, I felt myself withdrawing, not wanting to encounter yet another beggar of the day needing something else to survive, but she kept coming, pausing now and then to rest.

When she finally made it to my table, all she did was stand. That's it. Stand. She said nothing. She did nothing. She just stood there, holding, in her hand, what appeared to be a bag of small red berries. I continued pretending to be busy, looking down, not wanting to be yet another refusal she would get that day, hoping she would leave so I could continue working, but she did not -- now staking her ground like a thousand generations of abuelas who know that they were here first.

Unable to ignore her any longer, I slowly raised my head, then drifted into her eyes. She held my gaze for a long time. Like a flower. Like the way a baby, unblinking, looks at a stranger. Gently, she shook her bag of berries once, explaining without a single word that she was NOT a beggar, simply a seller of small red berries on a Tuesday afternoon. In the distance, I heard the whooshing sound of a cappuccino machine.

"Cuanto?" I asked, holding her gaze.

"Veinte?" I asked again, wanting to stay with her for as long as my Spanish would allow.

"Bueno," I replied, pulling a 20 peso note from my pocket and placing it in her small brown hand. Smiling ever so slightly, she handed me the bag of berries, bowed, and continued on her way.

I checked my email. I made a list. I ate a piece of fruit. Ten minutes later, Carlos, the waiter, walked over to me, saw the bag of berries on the table and asked if he could have one.

"Si Carlos", I said, opening the bag so he could choose his favorite.

An hour later, when it was time to pay the bill, I handed Carlos the bag and asked him to share the contents with his esposa and hijo when he got home that night. A few people came and went. Someone ordered a croissant. But Carlos and I just stood there, grinning, unmoving, a bag of small red berries now the center of our world.

Mitch Ditkoff, the Co-Founder and President of Idea Champions, divides his time between Woodstock, NY and San Miguel de Allende, Mexico. The above story is excerpted from his forthcoming book, TALES OF SAN MIGUEL: Life in the Slow Lane. His most recently published book, Storytelling at Work, just won a Bronze Medal in the Axiom Business Book Awards Contest.