After winning the presidential election, Abraham Lincoln looked across a crowd of well-wishers and said, "To this place, and the kindness of these people, I owe everything." Then he got on the train and left Springfield, the Capital of Illinois, for Washington. 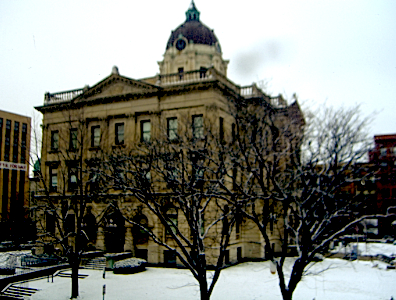 Illinois is made up of many small towns and one enormous town to the north, where Barack Obama lives. Like Lincoln, he announced his candidacy in Springfield.

The town of Vandalia, Illinois, houses the former state capitol where Lincoln once jumped out of the courthouse window to avoid a prickly vote, but that's a small town presidential trivia digression.

Bouncing between New Orleans and the Land of Lincoln after Katrina, I've never had the chance to meet the candidate from Illinois, but did join a New Orleans second line with John Edwards and was struck by the real moments some candidates will give reporters if they take a minute to listen. The Huffington Post Off the Bus project invited citizen journalists to cover events that reporters on the campaign bus often don't cover. Mayhill Fowler's post yesterday caused a tempest in the MSM teapot. Most of the media referencing Fowler's piece cite "a Huffington Post report." No link, no mention of the author and no specific Off the Bus reference.

Hillary Clinton and John McCain are now defending small towns from the B word (bitter), which now-infamously appeared in Mayhill's story. But the complete piece simply offers a cautionary tale of Will it Play in Peoria or Small Town Pennsylvania?

Parsing the Obama sentence that would have had Lou Dobbs' dentures flying out of his mouth if he hadn't been on break, here's what made all hell break loose and warranted an hour of coverage on CNN. He said of small town residents:

It's not surprising that they get bitter . . .

Obama lives in a flyover state and was explaining sentiments in the heartland to a group of California donors. I'm writing this from the buckle of the Bible Belt, where voters are often analyzed by talking heads who don't live here. For example, note the Condos For Sale sign on the building next to the courthouse pictured above. Most of them are still waiting for a buyer.

We still have those Brylcreem-style signposts by the side of the highway that explain how great guns are as you drive down the road. Although there is now a similar series of signs promoting biofuel past miles of cornfields.

Many small town pastors have urged congregations toward their presidential choices for seven years now. And with the ascent of the religious right, they faithfully listened as the message went from the pulpit to the polling booth. The last congressional election was the first time that voting bloc did not deliver.

Or antipathy to people who aren't like them or anti-immigrant sentiment or anti-trade sentiment as a way to explain their frustrations.

I grew up half an hour from a town that still burned crosses if an African American tried to move in. The town was dying, it may be gone now, but it held onto that antipathy "as a way to explain their frustrations," Obama said, putting it very mildly. On a more positive note, there's a town nearby that now boasts a "no racism" sign on your way in, and a "no racism" sign on the way out, in case you forget not to be racist once you leave. Change is possible.

Obama's paragraph that preceded the sentence piled on by Clinton and McCain stated:

Our challenge is to get people persuaded that we can make progress when there's not evidence of that in their daily lives. You go into some of these small towns in Pennsylvania, and like a lot of small towns in the Midwest, the jobs have been gone now for 25 years and nothing's replaced them. And they fell through the Clinton administration, and the Bush administration, and each successive administration has said that somehow these communities are going to regenerate and they have not.

So it's not surprising then that they get bitter . . .

Obama was talking about sentiments he has heard across the Midwest. I've heard them too -- all you have to do is ask. In the last 24 hours, Republican pundits have called the statement an election-loser and Clinton and McCain spokesmen are quoting the pundits. Google now shows more than half a million references to "Bitter Obama", and today's headlines are: "Obama Says He Erred in Comments on "Bitter" Voters" from Reuters and "Obama Concedes He Misspoke" from the Washington Post. The Sun Times came up with the catchy, "Obama: God, Guns are Only Refuge of Bitter Pennsylvanians."

Despite the headlines, this is what Obama said today at Ball State University, uber-Midwesterner David Letterman's alma mater: "I didn't say it as well as I should have." That sounds like a clarification more than a retraction. He continues:

What is absolutely true is that people don't feel like they are being listened to. And so they pray and they count on each other and they count on their families. You know this in your own lives and what we need is a government that is actually paying attention. Government that is fighting for working people day in and day out making sure that we are trying to allow them to live out the American dream.

If he wanted to include one more sentiment on living the dream, the Senator could quote the original orator from Illinois:

My dream is of a place and a time where America will once again be seen as the last best hope of earth.

Power Could Be Restored Sooner Than Expected To North Carolina Station