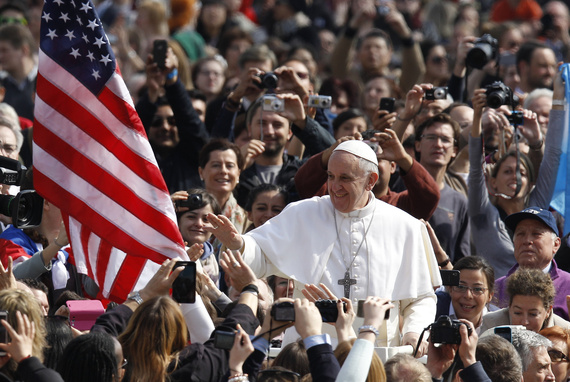 Having been away at a conference all last week, I missed the fawning media coverage of Pope Francis' many wonderful words and prophetic actions, so on my flight back, I had to catch up, and honestly, bingeing on the popestyria was a bit unsettling. Now, admittedly, at said conference, one of my clergy colleagues called me "snarky" (in a purely positive way, you understand), so I thought at first it was only my inherent snarkiness that was giving me pause. Then everyone got upset over the pope's secret meeting with Kim Davis and I felt justified in being slightly cynical. Let me be clear: I love the pope. I think he has done wonderful things to make people think about the church and Jesus in a new way and to welcome in those who have been left out. I'm really not cynical about the pope himself despite deeply disagreeing with his decision to meet with Davis (from which he has since backpedaled and is claiming to have given only one "true audience" during his visit, to a same sex couple). What I am cynical about is why is everyone making such a big deal about everything he does? First, everyone was falling all over themselves to trumpet and express amazement that he urged congress to be compassionate to immigrants. But isn't that what Christians are supposed to do? Not just popes, not just bishops, not just priests, all of us? (See Matthew 25:31-46.) Then everyone praised him for visiting a prison. Again, isn't that what we are all supposed to do? He shared meals with the poor: isn't that what we are all supposed to do? Why is it so shocking to us that someone in a position of such authority would do these things? Because we're not used to seeing authority figures, even in the church, enact humility and compassion. So rather than feeling inspired by the pope's actions, I feel scandalized that we find them so unusual, so scarce.

We are people almost wholly caught up with money and power. We build our entire lives around making as much money as possible, getting promotions, getting perks, having a fat savings account, and all the rest. We admire people who have their own personal assistants, their own drivers, their own speechwriters. Sadly, those of us in the church are not immune to this, with the possible exception of those in religious orders, who have to take a vow of poverty, so presumably they take it more to heart than the rest of us church professionals (and perhaps that's why this pope has acted so astonishingly, since he is a Jesuit). But for most of us, we plot and scheme to get higher paying jobs, negotiate our contracts for as much as we can squeeze out of our bosses or our parishioners and obsessively log in to our retirement accounts to watch them grow, grow, grow. So it's no wonder everyone is shocked when the pope exhibits behavior that is different from that.

The praise heaped upon Francis is very safe and politically correct, but it obscures a darker truth. By praising the pope, we absolve ourselves. We say, "Well, he's the pope he's supposed to be more spiritual, more highly evolved, more of an example than the rest of us. If I were a priest (or a rector or a bishop or a cardinal, or...) I, too, would devote myself to these things." Undoubtedly--because increasing our money and power historically makes human beings act more spiritually, right? That's not to say that they necessarily make people worse, but money and wealth tend to amplify our personalities and make us more of what we already are, so if we are selfish and fearful and prone to store up treasures for ourselves on earth, we will simply store up even more treasure when we become wealthy. But if we are open-handed and giving and consider the needs of others central to our values, we will continue doing that if we are ever blessed enough to gain wealth or power, which is what Francis has done, since by all accounts, he was generous and committed to helping the poor as a priest and bishop, and that has not changed now that he is the bishop of Rome.

The lesson we get from Francis this week should not be, "Oh, how nice; he cares about the poor, isn't that sweet?" The lesson should be, this man is an inspiration to thousands, perhaps millions, and the way he got to that point is by continually deepening the person he always was. The fact that he met with Davis, seemingly undermining his own efforts to create a more inclusive church, make this even more of a lesson for the rest of us, for clearly, Francis is not a saint, but a human being, full of contradictions and sometimes competing values and voices in his ears. It doesn't undo the good he has done and, I trust, will continue to do, it just creates a more three-dimensional view of someone in a position of power who has to move a large, unwieldy institution into the future without leaving behind those still stuck in the past. So to everyone who has been taken with Francis' actions last week, look into your own lives and ask yourselves, who would I be if I were to be even more of myself, to live even more deeply into my values? And I pray that the next time you see a pope or a bishop visiting prisoners, eating with the poor, giving a voice to the voiceless, you will not be amazed. You will simply think to yourself: of course, that's what Christians do.