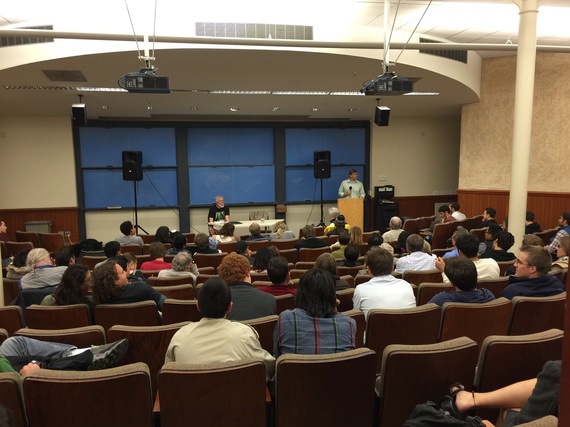 Last Saturday night at Stanford University, I had the honor of publicly debating the world's leading anarcho-primitivist philosopher John Zerzan. As a transhumanist, I differ from Zerzan on just about every topic. According to Wikipedia, anarcho-primitivism "advocates for a return to a non-'civilized' way of life through deindustrialization." Transhumanism advocates for the continued use of science and technology to improve and change the human species. Simply put, Zerzan encourages everyone to give up civilization and go back to a hunter-gatherer lifestyle. And I encourage everyone to do more to speed up technological and scientific progress. It was a meeting of polar opposite views. The debate headline was: Zoltan vs. Zerzan.

Hosted by the Stanford Transhumanist Association in the university's Geology Corner Auditorium, the debate was deliberately formal. John and I each took three 5-10 minute turns at a podium. Additionally, a 20 minute Q & A followed the debate. Unfortunately, the main video camera recording the event failed. Luckily, a second recording exists from laptops that captured the entire debate, but the quality is mediocre at best. Additionally, the footage misses the most exciting parts of the event, such as loud anti-civilization hecklers or the anarchist-dominated 140-person audience. The vibe in the auditorium was quite tense, and some transhumanists were worried about safety issues because no university security was present. In the very back stood people who some suggested were black bloc participants: individuals who dress in black, wear face-concealing masks and gear, and cause civil unrest. Many of them came to meet John Zerzan, who is well known as a past confidant of the Unabomber and has also had associations with many anarchist-type groups.

All this made for an exciting event. Below I share just a small portion of some of the most interesting statements made in the debate. Some of the sentences are verbatim, and others are paraphrased for easier reading. 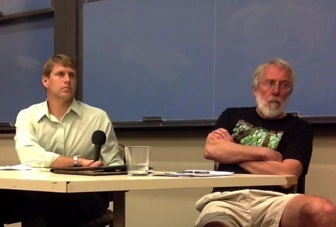 John Zerzan: I consider transhumanism an unhealthy fantasy. Primitive lifestyles--a time before domestication--didn't destroy the natural world, didn't objectify women, didn't have armies and temples and war, didn't have everyone working their ass off, like we have now.

Zoltan Istvan: I'm going to begin with a story, perhaps one of the luckiest things I've done in my life. I was the first foreigner to visit basically an untouched primitive tribe in the island nation of Vanuatu in 1995. I returned and filmed the tribe six years later for the National Geographic Channel. The problem there is that almost half the people born in the village don't survive to adulthood. What anarcho-primitivists are forgetting, that while primitive lifestyles might be more natural and harmonious with nature, people like that don't have the medicines, technology, and science to stop basic diseases and early death. The village lived in a constant state of mourning due to the frequent deaths of its people. 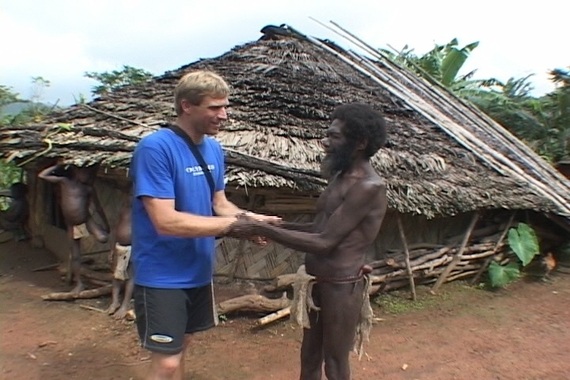 John Zerzan: Zoltan said people could get to be astronauts if they wanted. I don't think that's a healthy thing a person would want, to tell you the truth. Consider what it takes to take a picture of the Earth from the moon. There's a massive industrial basis for that. In fact, there's an industrial basis for so many of the nice modern things we have today. Except the cost is the destruction of this plant, destruction of the biosphere. That is unmistakable.

Zoltan Istvan: This question sums up the difference between transhumanists and anarcho-primitivists: Why is being an astronaut cool? Zerzan said he didn't think it was "cool." It's the symbolism of the question: Who are we? What are we doing on Earth? Where are we going? Transhumanists want to survive and thrive. We want to conquer nature. For a lot of humans that want to become more than they are--being an astronaut, being a scientist, being an explorer...conquering disease, conquering death, conquering the things that plague humanity--these are some of the coolest, most beautiful, most meaningful experiences that humans have ever had.

In short, a lot of the problems, a lot of the suffering, a lot of the dilemmas that the human race faces will be eliminated, cured, fixed, and overcome by technology--and that is something that is going to make us all better.

John Zerzan: We haven't talked about the one big issue in the world: overpopulation. It turns there are two big institutional events that created the unnatural population levels on Earth. The first is domestication in our species. The second is the Industrial Revolution, which is the basis for all modern technology, and which occurred because of millions of people doing grunt work. You have to basically enslave millions of people to have your toys.

I read on Zoltan's website a quote he wrote: "We didn't evolve through billions of years to remain animals." But we are animals. And some transhumanists want to become machines. I don't quite get that. Zoltan and I are really on opposite sides.

John Zerzan and Zoltan Istvan amicably shake hands. They are both actively looking for other venues to debate each other in again.