The motto of the French Revolution - Liberty, Equality and Fraternity - has guided societies worldwide for over two centuries. Each of its parts, however, has gained different weights and meanings in recent decades.

Markets, for example, have become freer and freer. But without equality and fraternity, they are unable to share wealth with the vast masses of people still excluded from the fruits of civilization.

Even so, there is promising news.

From the French economist Thomas Piketty to the Organization for Economic Cooperation and Development (OECD), there are a growing number of cases and mounting evidence that show how inequality affects the entire economy, not just its poorest players. Above all, it affects the very reproduction of wealth, by holding back long-term growth rates and thereby narrowing horizons for investment.

A new consensus is emerging for the 21st Century: contrary to what we were led to believe - that only growth makes distribution possible - today more than ever distribution makes faster growth possible.

It is not just a matter of intensity. Inequality, exclusion and the absence of minimal rights breed violence, conflicts and war.

There is no exaggeration in saying that without food and nutrition security, for example, there is no security in any sense of the word. The anguishing vicious cycle of conflict and hunger is precisely the theme I will focus on when I speak at the United Nations Peacebuilding Commission in January 2015, in New York.

In recent decades, humankind has reached the moon and landed robots on Mars. Globalization has reduced distances between people and countries and the world economy has grown quickly. Yet we still have more than 800 million hungry neighbors, and even more are still extremely poor. Billions have no access to education, health, basic sanitation and other services that make the difference in the development of a child.

Let us be clear: what separates people's destinies is not scarcity, but the paradox of plenty.

The world produces enough food to feed all of humankind. Yet affordable and equitable distribution of that food is still scarce.

Recent decades have brought undeniable progress. The number of people who are hungry has dropped by 200 million since 1990, and the proportion of undernourishment has fallen by some 40 percent.

The bottom line is that progress is possible, but just barreling down the same road will not be enough. Beyond universalizing successful experiences, we must build new solutions for problems such as hunger that are being reshaped by new circumstances like climate change.

One thing recent history has taught us is that we will never respond to old or new challenges with the quickness and the passion we need, if we simply leave that response to spontaneous market impulses. It is the duty of the state to promote social inclusion. When states accept and act on this responsibility, the results soon show. Brazil is one of many examples.

When fighting hunger became the Brazilian government's priority in 2003, progress came swiftly. According to the latest figures from the Food and Agriculture Organization of the United Nations (FAO), between 1990-92 and 2000-2002, the percentage of undernourished people in Brazil fell by nearly a third, from 15 percent to 11 percent. Since then, that same indicator has fallen fivefold to below 2 percent.

The recently released Brazilian National Household Sample Survey (PNAD) for 2013 confirms that tendency in the day-by-day perceptions of Brazilian families themselves. According to PNAD findings, the percentage of people who believe they suffer from severe food insecurity fell to 3 percent.

In the international scene, the complement to domestic policy is called cooperation. More than ever, this is what must guide relations between countries. Just a few weeks ago we saw how effective this can be. Faced with the risk of a cut-off in food assistance to Syria, the international community's reaction was timely, coordinated, rapid and effective. Cooperation means maintaining that same readiness at the service of development, not only for emergency aid.

"The hungry ask for dignity not charity," said Pope Francis, quite appropriately, just a few weeks ago when he spoke at the Second International Conference on Nutrition.

Making it possible to include those living in the margins of society depends on a broad gamut of public policies to promote dignity with social protection, training, education, access to healthcare, sanitation and basic infrastructure.

We have the resources do to so, as we have enough food to end hunger.

The challenge is to channel resources into policies and agendas capable of bringing the triad of liberty, equality and fraternity back into their role as benchmarks for our times.

A worthwhile starting point might be to reflect, without prejudice, on the ecumenical meaning of what Pope Francis said at the FAO. More than an economic anomaly, he said that the paradoxes of our times mirror society's omission, as it bows to self-governed economic forces. In a single sentence, he set forth his alternative: "Solidarity, in its deepest sense, is a way to make history." 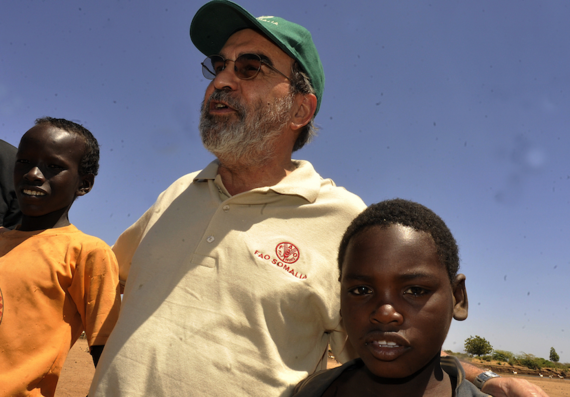 Director-General of the UN Food and Agriculture Organization