The back half of his vast yard is filled with flourishing blueberry bushes, tomatoes, lettuce, parsley and cucumbers. Walking toward the masterpiece I envy the dedication and hard work that enriched this land. It takes a certain person to plan and succeed in gardening. This plan begins with a dream. Joseph Przybysz, my grandfather, never dreamed of coming to America. When he was a young boy in Poland, years before the German occupation, he wanted to follow in the footsteps of his parents.

"My parents were farmers. There was no industry in that area of Poland, just farms. I hoped I would become a farmer on that land like my parents and their parents before them." he reflected.

His expectations of life were soon shattered. The Poland that he knew was changed forever.

Two weeks later, while Germany was advancing in the West of Poland, Russian tanks moved in on the East. My grandfather was born 50 miles from the Russian border. He would now be under Russian rule.

"We were hoping the Russians came to help Poland. But they came to help themselves, taking half of the Polish land." he reflected with a sadness in his voice.

In the midst of these changes, he continued to farm. With Communism, there is no private ownership, everything belongs to the state. Everybody had to join a collective farm.

"We planted our crops, but before the harvest came Germany attacked Russia and chased the Rosyjski (Russians) back where they came from. Germans said everything belongs to German right, meaning the crops. People had to deliver everything to the Germans. The penalty was death if they didn't." he said.

Farming, the trademark of his family, became terrorized. They were forced to do the dirty work of the Germans. People struggled to hide grain wherever they could. Food was scarce. Another change.

"A couple months later they took me to Germany at age 16. My brother Mike was also taken. We were very very lucky because we landed in Harz Mountain. That area didn't have any heavy industry. We were working in a saw mill, making boxes for food for the German army. The place was very beautiful." he said.

A beautiful labor camp. It was a haunting image. But the beauty could not mask the horrors of the camp.

"The bad thing was that the food was very meager and we were always hungry." he said.

Knowing my grandfather and the stories I've heard growing up, this was a modest statement. While he was at the labor camp, the substances they were fed were so poor he came close to death. A starving farmer.

As he described the sky during his days at the camp, I pictured him gazing up periodically to watch the war in the sky. American Airplanes flew overhead during the day; British during the night. They would fill the sky by the thousands.

"They were bombing German cities, German factories, German transportation lines. Germany's people started to hate the war. Saying, friend why do you fight, we are both human, why do we fight? They were saying this cause the Germans knew they were losing the war... So they did." he said.

Harder times fell after the war. There was no shelter or food.

"There were foreign laborers in Germany, others didn't want to go to land occupied by the Soviet Union, including myself. The foreign laborers were living in army barracks and other places they could find big shelters. The Americans and British provided us with food and all necessities." he said.

My grandfather's role after the war ended was completely reversed. The Americans provided an opportunity for Polish people to work in the American zone.

"So called guard companies attached to American armed forces. I joined. At the beginning we were guarding German prisoners. Later political criminals, big shots." he reflected with pride.

He was now guarding the very men who starved him and annihilated others. These men changed the lives of many people, including my grandfather's.

"I served five years in the guard company. Then I had a chance to immigrate to the United States. We arrived in New York on Thanksgiving Day in 1951. The skyline of New York, the city and the buildings, were such a joy to see that it became an image you remembered your entire life." he said with a smile. 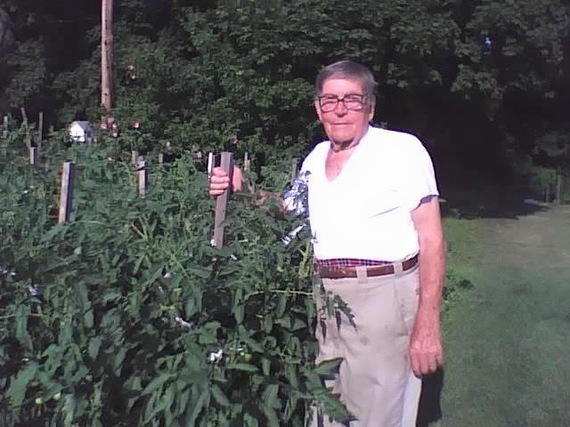 He arrived in America on the day our country celebrates feasting. A sure sign he would never starve again. Now I look at his garden with a different eye. This isn't the garden of a boy who dreamed of being a farmer. It is the garden of a starving man working with a green thumb to not only feed himself, but his loved ones as well. He has taught me more about health, strength, and living with a purpose than I could ever imagine. I tell this story in memory of him. He constantly encouraged me to keep writing and always had a book in his hand, like myself. I love you Grandpa. The gardens of heaven are going to flourish under your wings.