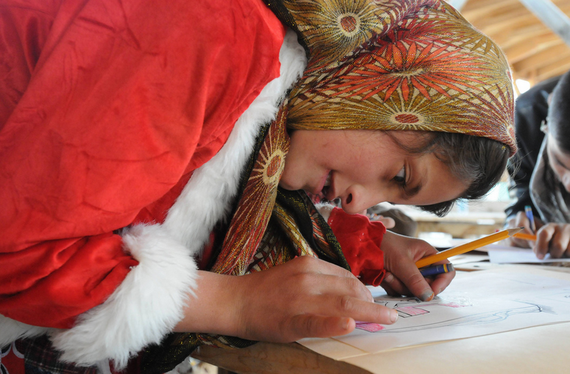 Although Naheed Bahram's working-class, conservative parents weren't formally educated, they believed in educating their children. Naheed remembers that her mother, who was killed by a bomb explosion when her daughter was only nine years old, had attended parent teacher conferences and been vocal about her children going to school. It was certainly not the norm for a mother in Afghan society to to be so involved in a daughter's education, and it would have a huge impact on Naheed's life.

Soon after her mother died in a bomb attack, and just a day after bombs blew up around her home, killing a neighbor, Naheed's family moved to Peshawar, Pakistan, where she and her many siblings attended a school for refugees. Her father came up with the tuition for each of his children - no easy task, especially in a country where education is the exception, not the rule. In open-air schoolhouses beneath thin, aluminum roofs, Naheed, happy to be a student, felt impervious to the heat that sometimes reached 45 degrees celsius.

Upon graduating from high school, she continued her studies in post-secondary medical program. After just two years, the Taliban, which had grown in power and reach, closed the program -- Naheed remembers this as being one of the worst days of her life. Although the school reopened and she returned, the doors were soon closed again. This time, disappointed rather than heartbroken, Naheed weighed her options and took a position as an ESL teacher at a grammar school.

Article 13 of the UN International Covenant on Economic, Social and Cultural Rights declares: "Higher education shall be made equally accessible to all, on the basis of capacity, by every appropriate means." In Afghanistan, however, and areas of Pakistan such as where Naheed lived as a refugee in Peshawar, girls and women are routinely denied education, which has led to a degradation of society. Although Pakistan is said to be a rapidly developing country, it is without reliable electric power, which will make it difficult lift its economic growth above a 2.9% five-year average. And in Afghanistan, one of the least developed countries in the world according to the Human Development Index, a person might be hard-pressed to see any positive growth. The country is among the lowest in terms of food security -- research has, in recent years, shown that this issue is integrally connected to the lack of educational opportunities for girls.

Indeed, one might speculate that Pakistan's snail-paced economic growth rate might also be partnered with the fact that twice as many of its men than women receive a secondary education. How can a country, after all, sustain itself when half of its workforce is unskilled and largely unable to work? In addition -- and the Taliban knows this all too well -- culturally accepted gender discrimination practices that allow parents to marry their seven-year-old daughters to grown men are upheld throughout Afghanistan and regionally in Pakistan because lack of education gives the perception of there being few other choices. 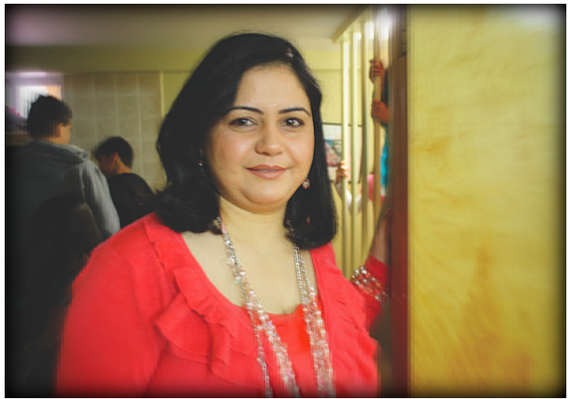 Naheed, with the support of her family, is one of only 20% of Afghan women who has been educated. She has taken full advantage of her situation and has become a voice for change. In 2006, she moved to the United States with her new husband and attended college in New York. While excited to continue her studies, life as an immigrant was isolating and being away from her family was difficult. In 2007, at the urging of a friend, she researched organizations in the area and found only one that catered to the Afghan community: Women for Afghan Women (WAW).

At WAW, Naheed found the community she had been missing, and immersed herself in the program as a volunteer, then an intern, a case worker, and now, as the New York Program Director. The program, founded only six months before 9/11, advocates for the rights of Afghan women in New York and across Afghanistan and challenges the cultural norms in Afghan culture that support gender-based violence.

Imagine, for a moment, the population of women Naheed works with -- roughly 80% of them who first come to WAW are illiterate (nearly double the rate of men), don't speak English and have never before been allowed to control their finances. Some of the ways WAW assists these immigrants is by giving them ESL and finance training to help navigate such things as their individual household income -- this knowledge allows them to accurately fill out paperwork for foodstamps and other social services to help support their families, and empowers them to have a level of control over their lives that they might not have had before.

In addition, women are given a safe, warm, culturally-sensitive home-away-from-home at WAW's comfortable offices. Domestic violence, an issue for many Afghan women, isn't regularly punished in Afghan society. Child brides, self-immolation, vicious domestic violence cycles and honor killings are not only culturally upheld, but earlier this year, a new law was drafted that would allow men to hurt their wives, sisters and children without fear of punishment by the courts. In fact, the law, which was passed by a parliament dominated by conservatives and former warlords (but wasn't signed by President Hamid Karzai, meaning it is currently back with the Ministry of Justice for revision), would forbid the relatives of an accused abuser from testifying against them. Imagine: being hurt by your husband or father but prevented from doing anything about it by your government? This law, if eventually passed, would make prosecution of gender-based violence - typically at the hands of a family member - impossible.

Women for Afghan Women is fighting an uphill battle. Last year, violence against Afghan women increased 28%. But WAW's work is critical, and betters not only the safety and health of women in both the States and Afghanistan, but assists them - one at a time - often in seemingly small but very important ways. In New York, they help women to get their driver's licenses - this is something taken for granted in this country, but is a mark of freedom in cities such as Kabul, where only 312 women became licensed drivers in 2012, and can help immigrants become more mobile in the States.

Education buttresses all of WAW's services, and certainly left an impression on Naheed's life: in 2011, she graduated from Queen's College with a BA in Finance and Economics, and is contemplating returning for another degree. In the same society where Malala Yousafzai was shot by the Taliban for attending school, both of Naheed's parents brilliantly had the foresight to recognize the importance of educating their children, and as a result, what an impact their daughter has since been able to make in the lives of countless other Afghan women through her work at WAW.

Originally posted on Advice to My Thirteen-Year-Old Self (The Advice Project) by Melissa Banigan. Learn more about Women for Afghan Women, here.