During this holiday season when there is so much uncertainty and conflict around the world, the story of the Christmas Truce of 1914 gives me a little hope. For it is a tale of humanity and compassion - two things that are essential for healing and recovery.

As the story is told, during World War I, about 100,000 German and British troops were amassed at the Western Front, each preparing for a brutal war. In the quiet and cold of the dark night, the Germans, began decorating their trenches and eventually singing carols.

The British listened. With every German carol, they sang a British carol. They even applauded each other's performances.

Finally, the two battalions at war with each other began coming out of their trenches, holding white flags and continuing to sing. Eventually, being each vulnerable to the other, they began helping each other bury their dead and celebrating Christmas. They unofficially, and without words, declared an unofficial truce on Christmas Eve. 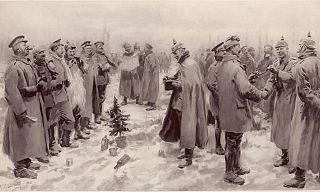 The truce lasted for 24 hours. And, then the war continued.

This is the way of life forever. Birth and death and birth again.

Through it all, it is the nurses and others who care for the sick and wounded, who tend to newborns and new mothers -- who bring humanity and compassion to the bedside. It is in that spirit that I share this story with you.

In Flanders on the Christmas morn
The trenched foemen lay,
the German and the Briton born,
And it was Christmas Day.

The red sun rose on fields accurst,
The gray fog fled away;
But neither cared to fire the first,
For it was Christmas Day!

They called from each to each across
The hideous disarray,
For terrible has been their loss:
"Oh, this is Christmas Day!"

Their rifles all they set aside,
One impulse to obey;
'Twas just the men on either side,
Just men -- and Christmas Day.

They dug the graves for all their dead
And over them did pray:
And Englishmen and Germans said:
"How strange a Christmas Day!"

Between the trenches then they met,
Shook hands, and e'en did play
At games on which their hearts were set
On happy Christmas Day.

Not all the emperors and kings,
Financiers and they
Who rule us could prevent these things --
For it was Christmas Day.

Oh ye who read this truthful rime
From Flanders, kneel and say:
God speed the time when every day
Shall be as Christmas Day.

For a brief and moving documentary on Christmas Truce story, watch this video.