A Story Worth Living is the story of dreams sought after and achieved as well as all the battles in the journey. Six men embark on a journey across Colorado's Rockies on adventure motorcycles and find much more than adventure. They find a story, as the title says, worth living. John Eldredge, the film's writer and producer, describes it as an adventure with meaning. 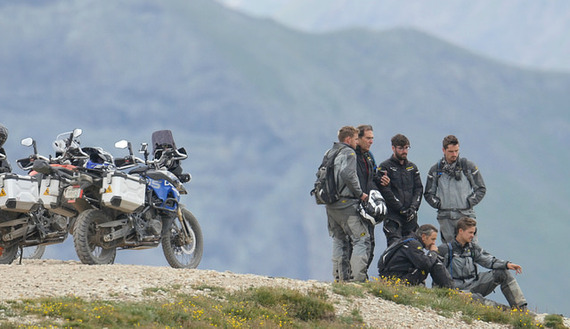 I was introduced to John Eldredge's work reading Sacred Romance, which he co-authored with his best friend Brent Curtis. They had planned to embark on a speaking, counseling, and writing partnership before their plans were tragically cut short when Curtis died in a climbing accident. Eldredge went on, even in the face of grief, to write several more books including the New York Times bestseller Wild at Heart.

Adventure has always been a part of Eldredge's writings. In 2014 he and his son's filmed Killing Lions, a series of short films exploring the questions millennial men are asking and their struggles to find a place in the world. In 2015 they had planned to do a similar series. After the 8 day journey they realized they had much more than a series of online films, they had a story worth telling on the big screen as a full feature film.
Watch the trailer below and read the Q and A I had the chance to have with Eldredge.

Tell us a little of where the idea for this trip came from.

Eldredge: All six of us are fans of the Ewan MacGregor / Charlie Boorman classic Long way Round - the 2003 BBC series documenting their trek around the world on these very GS bikes. Watching that series got us dreaming about a trip of our own one day. The other impetus was the near total vacuous nature of the adventure film genre - gorgeous scenery, outrageous footage, and that they have to say is, "Dude - you rocked that run, man." We think there is more to say.

What was the purpose of your trip?

Eldredge: That's kind of like asking climbers why they climb, or writers why they write. Joy, adventure, camaraderie, wanderlust. But deeper, we wanted to document "a story about story." We wanted to make a beautiful film about some of life's most important questions.

A Story Worth Living is a pretty interesting title, what does it mean and how will people relate to that?

Eldredge: Everyone is looking for a story worth living - it is the basic search of human life. Our existence doesn't come to us like a math problem - it comes to us like a story, one that unfolds over time, with characters and plots and settings. But most people are pretty lost in their own story. As the late sociologist Neil Postman said, the story our age has been given is the story of accident. That the the universe began by an accident. That it will end by an accident. And as Postman observed, for most people, those are not satisfactory answers. For most of the human race, the accidental life is not worth living. We tend to agree.

Why don't people think about living a better story?

Eldredge: Confusion. Distraction. Busyness. Pain. Addiction. There are all sorts of things that shut down the heart. We move from dreaming to getting by. It happens to the best of us.

Why Motorcycles? Does a story worth living always involve adventure?

Eldredge: The motorcycle part is kind of for the hell of it. Because we like bikes. Not everybody does. But when we say that adventure is a deep spiritual longing in every heart, we don't mean finding the perfect day snowboarding or the next killer wave. Small adventures like an epic trip train you for larger adventures - like doing a few years with the Peace Corps or teaching in the inner city, like being a parent or ending human trafficking. Yes - your life needs a great adventure.

Do you need to buy a motorcycle and go on a trip to live a better story?

Eldredge: Nope. You need to take risks, you need to chase a dream. You need to shut off the technology and get out in the real world and let it teach you, let it awe you. Let it test you.

Why do you think more people don't live adventurous lives?

Eldredge: For the same reason most people prefer McDonalds to eating healthy. It's "easier." It's all about comfort, and convenience. At least, at first it is. But over time a sedentary life kills you just as surely as fast food does.

Do you think most people go through life without a plan or living on purpose?

Eldredge: Yes. There's actually a lot of research on that, but you don't need a study to prove it - just look at the lives of the folks around you. Thoreau was right - most people live lives of quiet desperation. What's with all the medication, the anti-depressants and anti-anxiety drugs - why do we have to drug ourselves? Because we are lost.

How do you think people find a story worth living?

Eldredge: First off you have to come to terms with your own story. Your life is a story, and the clues to who you are why things have turned out the way they have are found back in your story. It shaped you. Most folks just try and bury all that and "get on with their lives." You have to honor your own life by paying attention to it. Then you need to find a Larger Story (note the capitals) one that will give you something bigger to live for.

Were you scared for yourself, your sons or friends during the trip?

Eldredge: Very. My best friend was killed on a trip like this, and I had that awful nagging feeling that it was going to happen again. Motorcycles are infamous for doing serious damage to human bodies. I was scared that it would happen on this trip, especially when we began to drop bikes and have the accidents we did, the ones we show in the film.

Is there a moment on the trip you would want to relive?

Eldredge: There are several. One day a hail storm came in with some ferocity (Colorado summer storms in the high country kill people). Lightning and wind and hail. The only refuge we could take was in a pickup truck. We had six of us crammed in the cab, laughing, passing around a couple cigars and beers, talking about what we'd already been through, and the adventure before us. It was just one of those sweet moments you remember all your life. The friendship, the craziness, the joy in simple things.

What's the first step someone should take if they want to live a better story?

Eldredge: Allow yourself to dream. Turn the editor off - that internal voice that always asks, yeah but how. How isn't helpful. Just let your heart come back up to the surface, give it a voice. Do some dreaming. Try something. Let adventure help you come alive. Howard Thurman said, "Don't ask yourself what the world needs. Ask yourself what makes you come alive, because what the world needs are people who have come alive." That will get you going in the right direction for sure.

What do you want viewers to take away from the film?

Eldredge: Something like, "Wow- my life is a story. I've never thought about that. That's huge." That's step one. Then we go on to address what you've done with hope and pain and the big questions. We hope that gets people thinking.

What's next for you guys?

Eldredge: Next year we hope to head off on another trip and film it - sort of like Ewan and Charlie did Long Way Round, then came back with Long Way Down, their trip through Africa. We're looking at Patagonia maybe.

How do people find out more about the film?