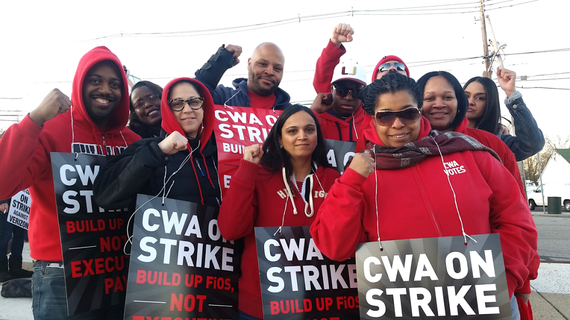 Let's talk about something that is truly extraordinary.

On April 13, nearly 40,000 workers walked out the door at Verizon. After ten months of fruitless bargaining, their backs were against the wall. They did not know how long they would be on the street, or how long their families would have to survive without a paycheck. But they were determined, they were militant, and they were creative. And their strike--the biggest in the country in years--captured the imagination of the labor movement and our allies across the country. On June 1, those 39,000 strikers walked back in the door, having faced down the 15th largest corporation in America.

Verizon workers knew that this fight couldn't be won alone. Unions and community groups joined them on the picket lines. Municipalities passed resolutions applauding workers and condemning management. Solidarity actions stretched from Massachusetts to Virginia, from bustling financial districts to rural 1,500-person towns. Kids and grandparents joined demonstrations. New Mexico and Arizona showed up in force for the Verizon shareholders' meeting. All across the country, our members adopted Verizon Wireless stores and drove down business by 25 to 30 percent. Local businesses delivered free pizzas to strikers, and neighbors wrote supportive letters to the editor. The strikers showed the entire labor movement, and all of America that when workers stick together and fight, there is no greater power anywhere beneath the sun!

It is proof that we are still living in a historical moment defined by Occupy Wall Street, a time when you can feel the anger on the street about income inequality, about the corruption of our democracy by the 1 percent, about the destruction of good jobs by rotten trade deals like NAFTA and the Trans-Pacific Partnership (TPP). These are movement times, times when the fight for fundamental change in our system is on, and all of us must join. There are many fighters in this movement -- the young activists of Occupy Wall Street, the brave strikers of the Fight for $15, the activists of Black Lives Matters, the DREAMers fighting for immigration reform, the Moral Mondays movement in North Carolina, the campaigners for voting rights and against TPP, campaign finance reform, and so many more.

We understand that we cannot rebuild our labor movement or reclaim our economy and democracy by ourselves. We can only do that by bringing together many diverse constituencies, everyone from environmentalists to groups fighting to get big money out of politics. And bringing these groups together means much more than each group simply supporting the issue priorities of the others.

A real movement is based on a shared understanding that we all have common enemies and common struggles. That is why, four years ago CWA helped found the Democracy Initiative, along with the leaders of Greenpeace, the Sierra Club, the NAACP, and Common Cause. Together we're working on campaigns to change the ridiculous Senate rules, restore the Voting Rights Act, increase access to the ballot, and get big money out of politics.

Our belief in movements is also why we helped convene a coalition of 30 organizations, including the AFL-CIO, MoveOn, People's Action, and the Working Families Party, to launch a new campaign called Take on Wall Street. It's a movement to break up the Big Banks and close the tax loopholes that enrich the hedge fund billionaires and the CEOs.

The power of that kind of movement building is also reflected in the fact that the TPP has still not been ratified. When we launched our campaign against the TPP in January 2014, we feared it was only a matter of months before Fast Track and then TPP would pass. But we mobilized like never before, building strong alliances with environmentalists, faith leaders, consumer advocates, seniors, and farmers. We eventually lost the vote on Fast Track last summer by just five votes in the House of Representatives, but we are actually still winning because we delayed any action on TPP until this year. Our coalition is holding Democrats that turned against us -- like Ami Bera, Debbie Wasserman Schultz and Michael Bennett -- accountable.

I have never seen a moment when the potential for progressive change has been greater.

Verizon isn't the first, nor the last, company to treat its workforce like a commodity that can be relocated and replaced whenever it's most convenient or cost efficient. But Verizon workers showed us a real way forward.

When we stand together, we can defend our livelihoods and improve our communities. United, the little guy can take on a multimillion-dollar corporation -- and triumph.

This is the power of working people. We will not tolerate attacks on our dignity. Workers will not standby as our hard work is devalued and dismissed. The American people understand that a short-term uptick in stock performance comes at great long-term costs to employees and customers. We demand that corporate America see us -- all workers -- as human beings.

This strike put an exclamation point on people's desire to turn around our country. This strike was a step toward restoring the American Dream for working families. This strike belonged to all of us.