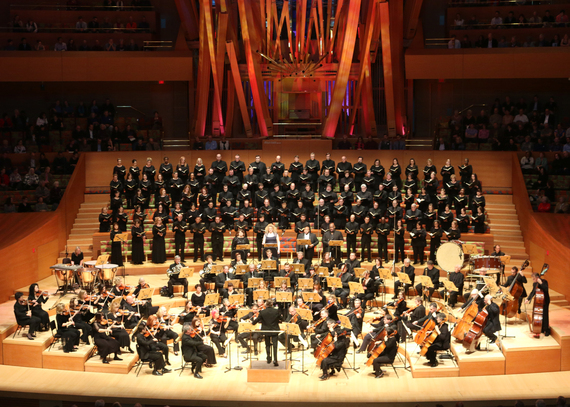 This past weekend at Disney Hall, an inspired Los Angeles Master Chorale and Orchestra, conducted by Artistic Director Grant Gershon, gave two thrilling, ultimately cathartic performances of Giuseppe Verdi's Requiem. I caught the first one Saturday afternoon, in which the combined forces, with stellar guest soloists, gave full account to both the work's titanic musical architecture and its human-scaled pathos.

The work was originally prompted not by any religious enthusiasm on Verdi's part, but by the deaths of two towering figures he revered in Italy's artistic firmament: composer Gioachino Rossini and novelist-poet Alessandro Manzoni. Agnostic and solidly anti-Catholic, Verdi had already in his Don Carlo conveyed an acidic contempt for abuses of authority by both clerical and temporal rulers. Ironic then that it was a respect for two "secular saints" that imbued the Messa da Requiem, premiered in 1874, with such fervid convictions. Playing some part may have been lingering memories of an early tragedy in Verdi's life, the loss to sudden illness of his wife and children.

All but two of Verdi's operas are tragedies of no return. With his Requiem, he rights the imbalance by making of Catholicism's episodic liturgy a coherent narrative of direct human quest for redemption, with no ecclesiastical intermediary. He casts his soloists as ordinary people, and his chorus as a collective humanity. More than a sum of parts, Verdi's Requiem is a holistic vision, called by many his "greatest opera."

Last Saturday was one of those occasions where a masterpiece's potential was fully matched in performance. The guest soloists, recruited from the ranks of opera, had voices big enough to fulfill Verdian power, even as their roles humanized the drama.

Tenor Issachah Savage's plangent, rafter-ringing "Kyrie eleison" set the pace. Bass Morris Robinson's "Christe eleison" matched that sonority with his own massive-oak resonance. Their aria-like portrayals in the "Dies irae" -- Savage's oboe-accompanied shepherd and Robinson's imminently dying supplicant - came to human terms with the immensity of their heavenly confrontation. Mezzo Michelle De Young carried much of the evening's solos in a convincing depiction of earthly remorse, while Amber Wagner's soprano, tentative only in one exposed high note, navigated smoothly her heavenly spheres of solace. Particularly sweet was the two women's duet in the poignant "Agnus Dei."

For their part, the Chorale and its Orchestra conveyed Verdi's mixture of cosmic wrath and serene beauty with rich, taut, and clearly enunciated passages, including a barn-burning "Dies irae" that featured sets of antiphonal Judgment Day trumpets placed in the high seating areas on both sides of Disney Hall. Percussionist John Wakefield's thunder-clapping, custom-built double bass drum proved visceral in the Disney's live, surround-sound acoustics. Later, a fleet-footed "Sanctus" propelled shivers of instrumental ecstasies up and down the choral lines, and without a doubt also up the spines of those in attendance. The Chorale and Orchestra earned sustained applause from a rapt audience at the conclusion of the turbo-charged "Libera me."

It was one of the finest outings I have ever heard from the splendid L.A. Master Chorale.