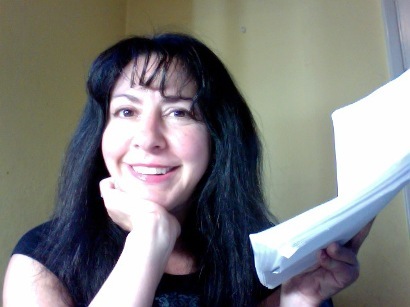 Dyane Leshin-Harwood has two daughters, ages 3 and 10. She is a successful free-lance writer, author of Birth of a New Brain - Healing from Postpartum Bipolar Disorder to be published in the fall of 2017. She is also the founder of Depression and Bipolar Support Alliance (DBSA), Santa Cruz County, CA, and a member of the International Society of Bipolar Disorders, the Marce Society for Perinatal Mental Health, Postpartum Support International.

After Dyane's second child was born she was faced with a postpartum health crisis, diagnosed with bipolar, peripartum onset, also known as postpartum bipolar disorder. She tells her story with deep devotion to her children and compassion:

"My mothering and writing fell to the wayside for the next seven years as I suffered through seven psychiatric unit hospitalizations, took over 30 medications to no avail, and requested two round of electroconvulsive therapy which I credit with saving my life. I tried my best during those years to be an attentive mother to my young girls, but I was a depressed shadow of my former self most of the time. Despite my guilt for not being the mother I hoped to be during those years, all I can do now is prioritize my hard-won mental health stability and be there for my family as a present and loving parent."

Dyane describes the importance of motherhood to her while building her career:

"I always wanted to be a mother. Being a mother has literally saved my life. If not for my daughters, I wouldn't have asked my husband to take me to the E.R. when I was acutely suicidal. I don't take being a mother for granted - it's a gift, an opportunity...and while I won't lie and say it's easy (with two daughters close in age who are either best friends or fight like little banshees, it's never easy!), I'm profoundly grateful to be a mom."

"At forty-five, I've maintained mental stability for over two years which has allowed me to be an involved parent. I consider this to be a profound achievement due to my lengthy battle with postpartum bipolar disorder. Landing my book deal has been an incredible privilege and I can't wait to see my book through to completion. I created a support group for women with postpartum mood disorders that is going well. It has been fulfilling to see other women who suffer with depression, bipolar, anxiety, and trauma come together and support one another."

Dyane has advice for new mothers with mental disorders who want to embark on careers while mothering with a significant support system:

"As a mom who runs a support group, I've witnessed the power of finding support and empathy with other mothers. There are Meetup.com groups for working mothers, for both new moms and those who are a bit more experienced. There are support groups associated with the maternity wings of hospitals as well. I'd call the closest maternity hospital for referrals. If you've suffered with postpartum mood disorder, Postpartum Support International is a fantastic resource for groups. "

Please leave comments for Dyane, a mother, writer, blogger and mental health advocate. She's been honored as a "Story of Hope of Recovery" by the International Bipolar Foundation, a "Life Unlimited" by the Depression and Bipolar Support Alliance, and a Psych Central Mental Health Hero.

In sum, Dyane says, "I write to share and connect with other people worldwide who have suffered with bipolar disorder like I have. I write to help other moms know they aren't alone with their perinatal mood and anxiety disorders. Follow Dyane @birthofnewbrain on twitter.

Laurie Hollman, Ph.D. is a psychoanalyst with a recent book, Unlocking Parental Intelligence: Finding Meaning in Your Child's Behavior, found on Amazon, Barnes and Noble, Familius and wherever books are found.

If you would like to participate in this series as a successful career woman and mother, contact Laurie and she'll be glad to include you.