The phone call came just minutes after Sonia Sotomayor was nominated by President Barack Obama to the Supreme Court. Rose Arce, my former producer at CNN and a Peruvian-American told me the news. I let out an excited shout: what?!

Though Sonia Sotomayor had all of the qualifications, I was truly not expecting to hear the news and could scarcely believe it. Do we really have a Puerto Rican woman from the South Bronx nominated to serve on SCOTUS? Like they say on "Saturday Night Live" -- Really? No! REALLY?

My friends -- accomplished lawyers, a newspaper publisher, reporters of the highest caliber -- were all asking, "Are we dreaming?" We all needed reassurance. My high-powered Latina friends are not just Puerto Rican. They are Mexican, Colombian, Cuban, Dominican and more. And now a woman just like us is being nominated for the highest court of the land. I ask again: Really?

I cannot begin to imagine all the tears shed by Latinas across this country on Tuesday. This nomination, like nothing before it, has made it clear that we finally exist as intellectual arbiters in our America. We exist as powerbrokers. It is a dynamic we are working hard to grasp and own and make real. Sotomayor has made it real for all of us.

All this unity notwithstanding, this nomination has the deepest and most profound meaning for my Puerto Rican sisters. Stereotypes of Puerto Rican women from NYC run so deep in our popular culture. I can still hear Mick Jagger singing, "We're gonna come around at 12 with some Puerto Rican girls that are just dyin to meet you. We're gonna bring a case of wine. Hey, let's go mess and fool around. You know, like we used to."

My Puerto Rican hermanas know that on some level they have always been fighting against a pervasive image. They are brilliant and accomplished but oftentimes minimized to a mere stereotype that is disconnected from reality. 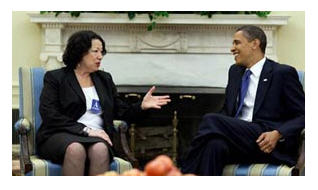 What President Obama has done for men of color, Sonia Sotomayor will do for Puerto Rican women. She will forever and profoundly change the image of what a "Puerto Rican girl" really is.

I want my daughter to avoid this image popular culture has maintained about Puerto Rican women and Latinas in general. This is why I take my daughter to maligned and misunderstood barrios, and why she hangs out with me and my high-powered Latina sisters. She can see what is real and what is not; she is living it.

Sotomayor's stomping ground of the South Bronx -- no stranger to vicious stereotyping -- also produced MacArthur Genius Award-winning environmentalist Majora Carter and Emmy-nominated musician Bobby Sanabria (only the beginning of a long list of erudite South Bronxers). In the true South Bronx, the sounds of conga playing in the middle of the night are welcomed as a sign of joy and passion, not bothersome noise. The true South Bronx is populated by bustling families and kids on their way to work and school who for decades bravely endured and pushed through the drug dealers and users who flooded the neighborhood.

That is the essence of who Sonia Sotomayor is. She pushed through. She stayed focused. She worked hard. She never closed the doors on herself, like so many strong women of color sometimes do. And now her opposition will try and paint Sotomayor as a radical, in part because of the neighborhood in which she grew up. But the Republicans will be in a real pickle if they alienate Latino voters.

Sotomayor will also hopefully break down stereotypes Mexicanos and other Latinos have about Puerto Ricans. Those groups listen to The Rolling Stones too.

This Friday night I will go to a Cuban playwright's brownstone in Spanish Harlem, where we will listen to El Gran Combo and toast a Latina who has "made it." My daughter will be with me. And while I remain stunned by the shocking reality of my country so quickly changing to reflect me and my reality, I am sure my daughter won't have it. My America was always, at best, a place of hopeful change. In her America, a black man can and does become president; a Latina can and does end up on the Supreme Court.

And so this is how it feels to be living in a time of change -- feeling the bumps of transformation like sudden conga beats in the night, beats that surprise at first, but ones I ultimately welcome with joy and hope.

Maria Hinojosa, an award-winning journalist and author, joined NOW on PBS as Senior Correspondent in 2005. A former CNN reporter, Hinojosa also serves as anchor and managing editor of National Public Radio's Latino USA, a weekly national program reporting on news and culture in the Latino community. Among her many awards and honors, Maria won a 2009 Gracie Award for "Outstanding Reporter/Correspondent."