There is nothing like the dawn chorus when the sun strikes the trees, warms up the air and birds take flight. The iridescence of rollers; secretary birds on the move; the unbelievable Borneo bristleheads; shimmering golden pheasants; or hornbills coming into their roost in the heart of Borneo.

I have the great fortune in my job to travel around the world. One of the first items on my agenda when landing somewhere new is answering this question: where are the birds? In North America I've tracked 728 bird species, and only two nesting species remain on my North America list: the Whiskered Auklet and Ross's Gull, both found in the most remote parts of Alaska.

And, as you might imagine, the Bald Eagle has been one of the most glorious winged creatures I've seen take flight. I don't know a single soul who has seen a Bald Eagle in the wild without breaking into a grin. 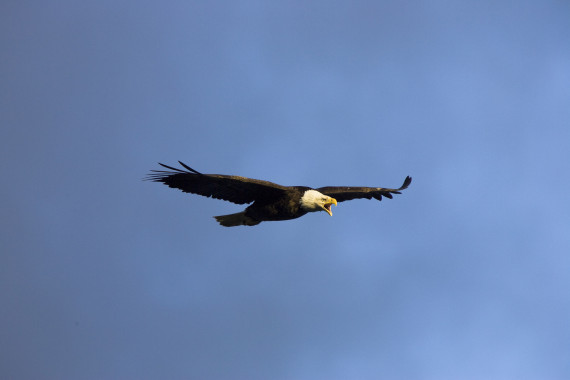 Photo courtesy of Scott Dickerson for the World Wildlife Fund

When the Bald Eagle was removed from the endangered species list seven years ago, it gave us cause to celebrate the work of scientists and land stewards who fought to ensure that this noble bird -- our national symbol -- would be here to inspire us still today.

When I was seeking my current position, one of my good friends, a Princeton professor of environmental policy named David Wilcove, quipped, "Now that you've been selected to lead an organization with a giant panda for its logo, your main job is to make sure it doesn't go extinct." The same could be said for the symbol of our country. Its recovery inspires us to dream about the possibilities to do equally important work elsewhere on the planet.

Around the world, you'll find countries fighting to keep their heritage alive for future generations.

· Elephants stand as perhaps the most recognizable symbol of Africa, and yet in the heart of that continent poachers kill tens of thousands of African elephants (30,000 annually) for their ivory tusks.

· In South Africa, my colleagues revere rhinos because in that country is where we saw the greatest recovery of white rhinos. An amazing turnaround occurred from a population of just a few dozen white rhinos globally in the early 20th century to tens of thousands today. And yet over the past seven years rhino poaching numbers have climbed from 13 poached in 2007 to nearly 1,000 this past year -- all feeding a demand for their horns coming from countries like Vietnam.

· In China, only 1,600 giant pandas -- the symbol of that powerful country -- are left in the wild. But the Chinese government has mounted an ambitious effort to reverse those numbers and reconnect the panda's habitat.

· And in places like India and Russia, wild tigers -- among the most majestic animals on the planet; revered creatures that feature prominently in Buddhist and Hindu folk stories -- are struggling to survive. As few as 3,200 wild tigers remain.

It's difficult to imagine the devastating impact that losing such significant creatures would have not only on ecosystems, but also on the culture and soul of communities whose history is bound up in nature.

Saving the Bald Eagle required ambitious strategies, a devoted country and courageous citizens to turn the tide. We need to do likewise with the other world species that stir the heart, remind us of what's wild and beautiful on this planet and symbolize the powerful connection between all of us and nature. It is nature's very foundation that gives us the ability to feed our children, put a roof over our heads and inspires us to do great things.

So as we reflect on Save the Eagle day, let's cheer our past victories and recommit our efforts going forward to save the world's magnificent species. Let's celebrate the Bald Eagle's recovery by stepping outside, and looking up. And if you get lucky and catch a glimpse of one of these glorious creatures, don't forget to grin.