A small but hugely significant victory for people power was achieved in Ireland this month. After 19 nights of sleeping on the floor of the Paris Bakery in Dublin, a group of mostly young migrant workers succeeded in forcing political action that will help them recoup unpaid wages and make history in the process. All but one of the workers had been involved in trade unions or political campaigning before, but all have emerged as beacons for what's possible when people have the courage to act. 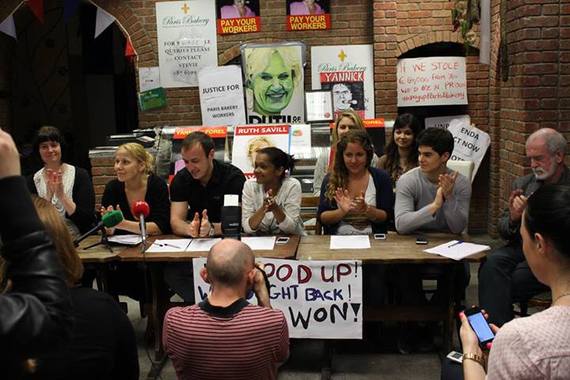 Their sit-in campaign started when owners of the popular cafe bakery, Yanick Forel and Ruth Savill, closed the doors of their thriving business. Rumors spread of plans for the owners to set-up elsewhere in the city. There were suggestions of business interests in the Caymen islands and revelations of how the owners had been feted with awards and praise from the business community. Earlier this year, thousands of people signed a petition to stop the popular establishment being demolished to make way for a proposed new shopping complex.

What petition signatories, including myself, didn't know at the time was that while the bakery was doing a roaring trade, the owners were paying neither their staff nor their taxes. One worker was owed at least €6,000 and had been hanging on for months on the promise that the money was on the way. Another was made homeless. There were also claims of below the minimum wage working and a regime where holiday pay, tips and other entitlements weren't forthcoming.

When the workers began their impromptu sit-in on May 20th nobody expected what would follow. Within hours of the occupation local traders and campaigners came on board. An impressive coalition of groups including the OPASTI Plaster's union, Migrant Rights Centre Ireland, Mandate, ENAR Ireland, SIPTU, ICTU and Uplift helped them organize actions and communicate what was happening. In the days that followed, local residents and stall holders, election candidates and passers-by started dropping in to offer food, water, songs and solidarity. In an act reminiscent of struggles of old, electricity workers refused to turn off the power, despite being ordered to do so. Just over 100 years since the famous 1913 Dublin lock-out, a new symbolic fight for dignity, rights and survival was being born.

Speaking during the campaign, Venezuelan woman Matilde Naranjo, a former waitress, said, "Wage theft is appalling and workers need more legal protections. We do not want to see this happen to any other worker in Ireland. This is not just our fight or the fight of migrant workers but a fight for all workers."

The campaign grew in momentum and magnitude. Sinn Féin leader Gerry Adams paid a visit, so did government Minister Joan Burton, who gave assurances of help. They visited the Dáil (the Irish parliament) where Dessie Ellis TD, questioned Minister Richard Bruton on this issue and who, according to workers, inflamed the situation by stating what was already known. There was deadlock. 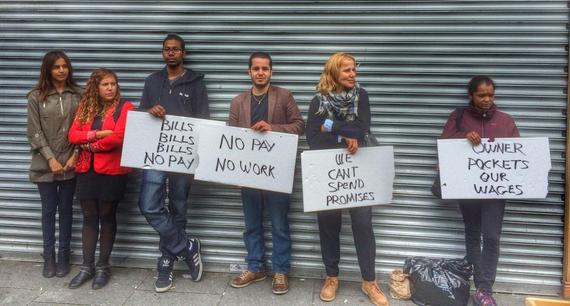 The owners refused to engage in discussion, or to wind up the company, allowing them to walk away and prevent access to an Insolvency Fund. Similar situations had happened before due to a legal loophole that means workers often don't get paid when a business ceases trading. It had happened with Vita Cortex, La Senza, GAMA, HMV, Thomas Cook and Connolly Shoes. Political promises of reform were made time and time again.

The Paris Bakery campaigners took their message to the airwaves, online and on the TV. Messages of support came flooding in from as far away as the U.S and Australia. Their cause was raised at a UN conference in Geneva. They protested at government buildings, held vigils on the streets, and arranged colorful and creative pickets outside the home of one of the owners. People with no experience in campaigning were suddenly organizers and leaders, interacting with a mass audience of supporters on Twitter and Facebook.

Almost 5,000 people liked their Facebook page. Over 3,500 people signed a petition. Over 1000 emails were sent to the Taoiseach (Prime Minister) and 100s attended protests, pickets and vigils. Perhaps the quotes from 1916 rebellion leaders that adorned the walls of the cafe bakery had inspired something. Maybe there was something about the history of Moore Street, where several of the 1916 leaders had been captured. There would be no surrender on this occasion. 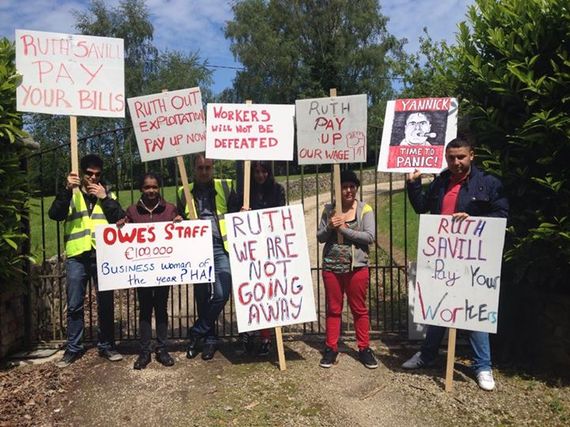 In the end, determination paid off. On Tuesday June 10th, the by now exhausted campaigners received a letter from the Revenue Commissioners saying that they were winding up the company. Political pressured had paid off. Workers would be finally able to access the Insolvency Fund that was previously denied to them by greed, arrogance, and unjust legislation.

The former staff won't get all their money but they have been transformed as people in the process. They have realized the power and beauty of collective action, of standing up for what is right, regardless of the discomfort, the risks and the obstacles involved. They have uplifted each other, and in turn inspired others in Ireland and abroad. The workers and their supporters exemplified what is meant by the old Irish saying 'níl neart le cur le chéile' (there is no strength without unity).

The workers are now continuing their campaign so that what happened to them can't happen to others. They have become vocal advocates for the protection offered by trade union membership. New legislation inspired by their fight appears imminent, meaning unscrupulous employers can't simply walk away from their responsibilities. These new leaders have given hope to many, particularly those in the restaurant sector, where exploitation is rife. They have reminded us that change is possible and that whatever the odds, we should never give up.

Ruairí McKiernan is a social innovator, campaigner, and member of Ireland's Council of State. He is also a founding board member of Uplift (www.uplift.ie), a new people powered campaigning organisation that will launch later this year. He is on Twitter @ruairimckiernan and Facebook www.Facebook.com/hopehitching