When in Dublin, don't say: "What's the Liffey?"

Yes, dear readers and any offended Dubliners, before this latest trip, my first to Dublin, I had not heard of the magical River Liffey. (I slid by as an English major without reading James Joyce, and this is something I'm correcting.) If you're as ignorant as I was, know The River Liffey winds through Dublin, and asking this question was the equivalent of going to Paris and wondering aloud: "What's this Eifel Tower everyone talks about?"

The River Liffey from the O'Connell Bridge.

The Liffey is the artery of Dublin's distinct and rebellious energy. Numerous bridges spanning it invite explorers to hop from north to south, into ancient neighborhoods and pubs that charm with an atmosphere only history can provide, an atmosphere so rich it transcends the tourists. The Liffey's bridges project whimsy, off-beat beauty and intellectual swagger, from the old-world, cast-iron Ha'Penny Bridge to the Samuel Beckett, a majestic riff on the Celtic harp that sublimely connects the past to the future. As rivers go, the Liffey is like a hip version of the Seine to me, it delineates it's city but it feels retro and mellow, and like it's not taking itself nearly as seriously as it's Parisian counterpart. 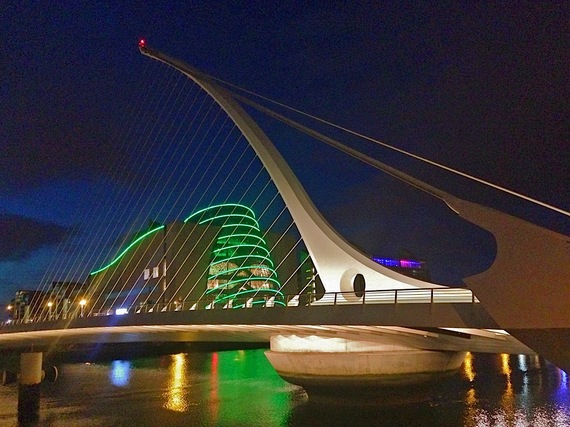 While enjoying as many of Dublin's pubs and restaurants as I could, I learned something about this great city through the graffiti in these bathrooms: Dubliners are an educated citizenry that likes to flaunt its literary prowess. I popped into The Porterhouse for a traditional, Irish stew (the memory of it distracting me as I write), and I finally photographed of some of these wall musings:

"I will show you fear in a handful of dust." T.S. Eliot
"Think of (all) the beauty still left around you and be happy." Anne Frank
"Show me a hero and I'll write you a tragedy." F. Scott Fitzgerald 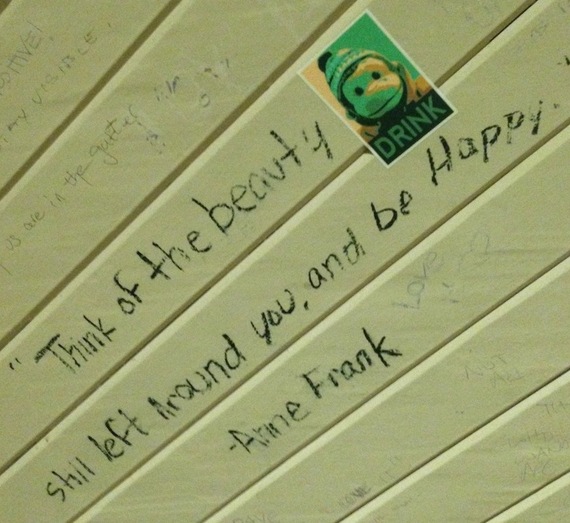 I found the bathroom graffiti in Dublin positively thought-provoking, elevating and spiritual. Many of the people I met there could be described the same way, but you might want to also add funny. 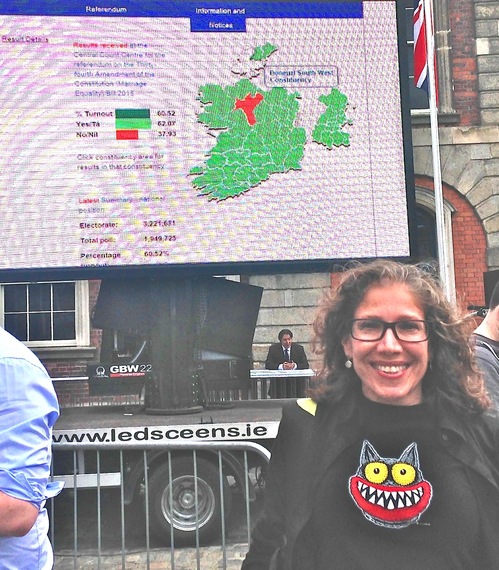 An historic moment at Dublin Castle.

I had to say a few things about Dublin before mentioning that I had the pleasure of returning to the city on the day they announced the passage of Ireland's momentous gay marriage referendum because, readers, I want you to take my affection for Dublin seriously. I don't want you to think I saw the city through rose-colored glasses or fell in love with it impulsively just because everyone was celebrating and dancing in the streets. Yes, I loved the hype, the hope, the happiness, and the heroism, but Dublin and I fell in love at first sight. The rainbow flags and drag queens only reinforced it. 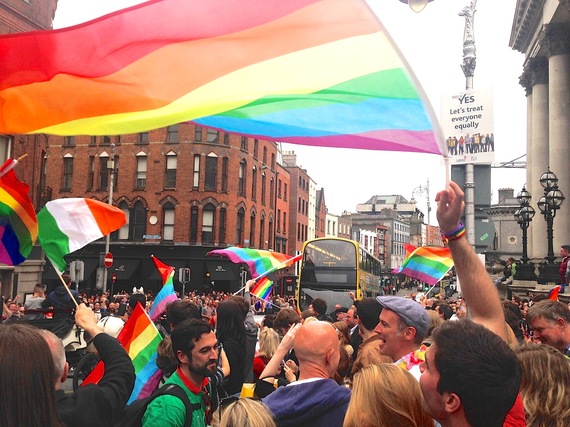 I was already loving Dublin's food. Yes, the food! A farm-to-table feast at The Winding Stair, Super Miss Sue's elevated fish and chips, and a definitive corned beef and cabbage at the authentic, if touristy, The Oliver St. John Gogarty. I'd seen the venerated Book of Kells, and went to tastings at Guinness Storehouse and the Irish Whiskey Museum. I marveled at the Dublin Spire and the historic General Post Office, rebel headquarters of the 1916 Easter Rising and a symbol of Ireland's independent spirit.

I contemplated the rich, literary tradition I have so much to catch up on at The Dublin Writers Museum and The James Joyce Center, two humble institutions that only take an hour each to experience. Just go. They're a great way to break up a daylight pub crawl if that's the only thing that motivates you. There's a lot to do in this friendly, enchanting city that continues to influence the world. I highly recommend a visit.

A Tale of Four Cities is a series of travel notes from Maddy Lederman's recent trip abroad. Next city: Liverpool.