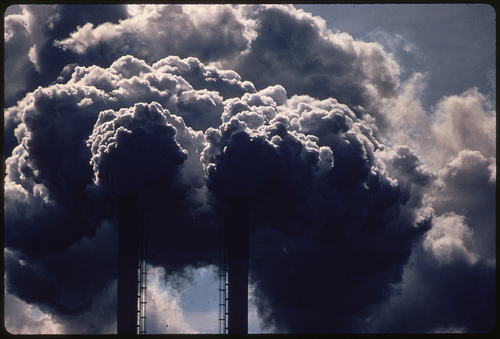 America's air quality in the 1970s left a lot to be desired. But since then, ever-stronger air pollution regulations have helped clean the air. It's a different story in China. (EPA)

There are those that argue that long-term sustainable growth requires significant investments on the pollution control/prevention side. This notion is supported by a study of the U.S. Environmental Protection Agency that found that expenditures on air pollution controls in the United States (where the Clean Air Act was passed in 1970) have been substantial but have more than paid for themselves in savings on the medical side with more than 160,000 premature deaths prevented through 2010.

In China, where economic growth has long been given precedence over environmental protection, air and water pollution threaten to undermine the economy (see also here) and is beginning to bring about significant social unrest. (More here.)

Still, the debate between those that favor economic gain over green considerations (a false choice in many regards, as I've written about here and here) and those that argue environmental health spurs economic health rages on. Two papers published last week add a bit of fuel to the debate.

As anyone who has been reading a newspaper of late will know, China has huge environmental problems, among them air pollution. (More here.)

Just a few days ago, the New York Times reported that "[o]nly three of the 74 Chinese cities monitored by the central government managed to meet official minimum standards for air quality." Can China turn that around? A new study, by Deliang Tang of the Mailman School of Public Health at Columbia University and colleagues published last week in the journal Plos One, suggests that opportunities for significant improvement abound.

The authors looked at the developmental patterns of two cohorts of children -- one born before and one born "after a highly polluting, coal-fired power plant in Tongliang County, China had ceased operation" because it had been such a huge source of pollution. For each cohort, at the time of their birth, their umbilical cord blood was analyzed for molecular biomarkers of exposure to polycyclic aromatic hydrocarbons (PAHs) related to DNA damage and brain-derived neurotrophic factor (BDNF), a key protein for brain development.

At age 2, the children were tested for developmental milestones. The results showed that the second cohort born after the coal plant closed had less PAH exposure and better developmental scores.

The bottom line: With the air quality as bad as it is in China, almost any action -- like closing down a single power plant -- can reap significant health benefits.

Lest we get too smug, it bears noting that some towns and cities right here in the United States face similar problems from local factories and power plants. (More examples here and here.)

Still, we've made a lot of progress here and Americans living in metropolitan areas usually find themselves breathing air that is relatively clean by international standards.

But air pollution persists, and data suggest that that pollution comes at the cost of public health. And so the EPA continues (as it is required to do under the Clean Air Act) to try to ratchet down on air pollutant emissions. But it's not easy. A case in point: EPA's efforts to lower concentrations of ground-level ozone and particulate matter commonly found in photochemical smog.

The U.S. EPA was formed in 1970 by Executive Order during the Nixon administration, and within a year the first standards were set for ozone. However, it wasn't until the '90s that most American cities began to see ozone pollution decline, with even the worst air pollution offenders -- Houston, Los Angeles, Atlanta -- at least holding their own.

And then in 1997 -- it was like déjà vu all over again. New epidemiological data showed persistent health effects from ozone and fine (smaller than 2.5 micrometers in diameter) particulates at lower and lower concentrations. EPA responded with stricter air quality standards for ozone and a new standard for fine particulates [pdf]. These standards set many areas that had been in or had just reached attainment into non-attainment, requiring that they develop long-term plans to get back on track. See for example: this paper and this paper.

Not surprising, there was significant opposition [pdf] to EPA's new standards. Some argued that the epidemiological evidence justifying the new standards was weak, others that compliance would be prohibitively expensive. Some even expressed skepticism that the standards, being so close to ambient background concentrations, could ever be met. (Some of these objections may sound familiar -- they were played out just a few years ago when EPA was considering lowering the ozone standard once again. In this case, the Obama administration blinked and the standard was not changed.)

A paper published last week in the Journal of the Air and Waste Management Association by Daniel Cohan and Ran Chen of Rice University suggests that at least some of those concerns were unfounded. (Full disclosure: Daniel Cohan is a former Ph.D. student of mine.) The authors analyzed air quality data from parts of the country that did not meet the new fine particle air quality standard in the late 1990s and so were required to develop plans to meet the standard by 2009. The authors reported that

"Of the 23 eastern U.S. regions considered here, all but one achieved the 15 [micrograms/cubic meter] μg/m3 standard by 2009, and the other achieved it the following year, with downward trends sustained in subsequent years."

But the real proof of the value of an air quality abatement program is in data showing improvements in public health and/or ecosystem function. That was relatively easy in the case of the plant closure in China, but when you get to the low levels of pollution we're currently at and the incremental nature of the air quality improvements, it can be a challenge. It requires detailed statistical analyses of years of epidemiological data to tease out the connection between changes in air quality and health outcomes from the noise of a host of confounding factors.

Such analyses have been able to establish significant health benefits from U.S. air quality regulations promulgated over decadal time scales.

But what about the air quality improvements documented by Cohen and Chen? We don't yet have direct confirmation.

So while the Chinese get to see the benefits of their air quality program almost immediately, we've got to live with some uncertainty. That's the price we pay for the decades of work we've put into cleaning up our air. Well worth the bargain.

The Federal Clean Air Act Amendments of 1970, though technically amendments, set the first national standards, establishing “the basic US program for controlling air pollution.” But air quality laws date back to 1955.↩

PAHs are a pollutant produced when coal is burned.↩