While Thomas Jefferson was writing his way through life, liberty and the pursuit of happiness, another architect on the other side of the earth was pondering his own private retreat.

The Qianlong Emperor of China was known as a military leader and politician, but also as a poet, philosopher and connoisseur of fine art. When he started to think about retirement, he chose an 11-acre northeast corner of Beijing's Forbidden City and began to plan and design its landscape, buildings and furnishings.

Among the latter was his own throne. It was assembled out of one of the rarest of commodities in late 18th-century China: plate glass imported from the West. Native artisans carefully layered pound upon pound of jade and darkly exotic woods onto the exalted seat of power, as well as onto two screens on either side. 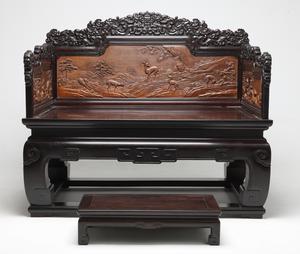 "He was the last great emperor before the Opium Wars," said Henry Ng, executive vice president of the World Monuments Fund (WMF). "He opened the commercial gates. During his time, the balance of payments from the West was very much in China's favor, from the sale of porcelain, silver and tea."

After his death in 1799, the mid-19th-century Opium Wars with Britain not only reversed that favorable balance of payments, but also decimated China's position as the largest and most prosperous nation on earth. It meant a humbling turnover of Hong Kong to the British. It would lead eventually to the nation's flirtation with democracy, then a commitment to communism and now, a highly successful experiment with a government-controlled, free-market economy.

But for more than two centuries, the emperor's plate glass throne was locked away from public view, as other portions of the Forbidden City were burned or demolished.

Then came a symbolic moment of cultural transparency for China and the West. In 2005, Mr. Ng of the WMF stood awestruck inside the emperor's garden in the Forbidden City with Nancy Berliner, curator of Chinese art and culture at the Peabody Essex Museum (PEM) in Salem, Mass.

They were in a building called the Bower of the Three Friends with their hosts, representatives of the Palace Museum in Beijing. They were looking at the emperor's throne, its screens to either side. It was 230 years old and untouched in all that time. Perhaps a total of 200 people -- emperors, eunuchs and servants -- had cast their eyes upon it while it lay, sealed, for generations.

"We found it in a room that was so dusty, it just looked mundane," Mr. Ng said. "We thought maybe it was frosted glass, or gray stone."

"I licked my finger and rubbed the back of it," Ms. Berliner said.

They found themselves looking through clear glass. Its screens offered the dual benefits of shielding the visionary emperor from the wind and allowing him a sidelong view, left and right.

Some of the calligraphy on display was from the scholarly hermit's own hand. "He'd created a place where he could bring harmony to himself, and then to his country," Ms. Berliner said. "There's an emphasis on purity and virtue -- of a politician, surrounded by a corrupt government, remaining upright."

Today the throne is among 90 objects from the emperor's garden -- buildings, furniture, murals, paintings, jade and cloisonné -- in an exhibit that opened in September at PEM in Salem. It's the extraordinary result of three entities -- WMF, PEM and the Palace Museum -- working together to conserve its treasures and exhibit them to the people of the United States -- and later, to the Chinese.

"The country of his period was stable and prosperous," said Yang Fan in the Foreign Affairs Department of The Palace Museum. "His reign was a period during which Chinese society's politics, economy, and culture all underwent great advances."

Indeed. And because of China's return today to a favorable balance of payments with the West, those advances are once again on the march.

There's no question that Thomas Jefferson still casts the longest of shadows across the nation he helped birth 234 years ago. His Louisiana Purchase was a stroke of genius, along with the Lewis and Clark expedition that defined the vast size of the country he envisioned. His Palladian residential aesthetic, his Greco-Roman temple to government in Richmond, and the meaning of his Declaration of Independence still inspire and resonate across the republic.

But lately the republic is limping, despite the poignancy of Jefferson's symbols, the richness of his words and the liberating nature of their meaning. A booming 19th-century-industrial sector that once usurped his vision of an agrarian society now seems a relic of the past. The national economy, once believed capable of enduring endless cycles of boom and bust, now begs a serious strategic overhaul.

In the meantime, China's engaged in social engineering from the top down and succeeding wildly. The current goal there is to build 50 cities for one million citizens each, all within the next 20 years. The Chinese are turning to American architecture firms like HOK, SOM and Duda Paine to help plan and design them.

Like the Qianlong Emperor's throne -- built from Western technology centuries ago -- these new cities for China will be designed with knowledge from outside the nation's borders.

This time around, though, it's unlikely that any will be sealed away.

Visitors in Massachusetts will be able to see this once-in-a-lifetime exhibit until Jan. 9, 2011. From there it will move to The Metropolitan Museum of Art in New York, from Feb. 3 to May 1. Then it will travel to the Milwaukee Art Museum from June 11 to Sept. 12.

For more on the exhibit, go to http://www.pem.org/exhibitions/109-the_emperors_private_paradise_treasures_from_the_forbidden_city

For more by J. Michael Welton, go to http://architectsandartisans.com/