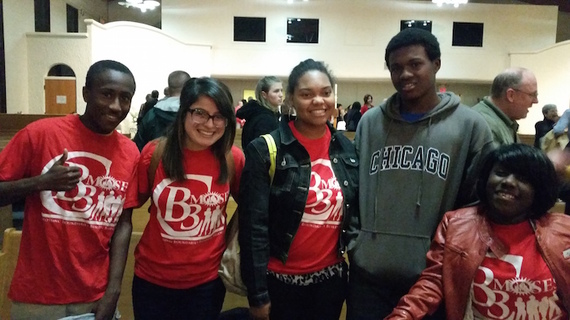 The Congressional Progressive Caucus budget introduced Tuesday, March 17 -- "A Raise for America" -- offers the kind of vision we need to ensure a better future for our youth (like MOSES' Crossing Boundaries, Building Bridges or CB3, youth leadership team above) by improving transportation and infrastructure and supporting and providing resources for learning for all children.

Earlier this week the New York Times quoted U.S. Rep. Rob Woodall (R-GA 7), member of the House Budget Committee, as saying: "A budget is a moral document; it talks about where your values are."

Rep. Woodall was among the majority members in the House Budget Committee who released on Tuesday, "A Balanced Budget for a Stronger America." But the better choice came Wednesday, as the Congressional Progressive Caucus (CPC) released its budget proposal aptly titled, "The People's Budget: A Raise for America." These two budgets reflect not just competing values, but contrasting systems of morality.

The House Majority budget preserves -- or makes worse -- the status quo of trickle-down economic policy that is working only for corporations and the wealthiest Americans.

The CPC People's Budget begins with a clear understanding that a healthy, vital economy is built from the center out -- and that center is real people and their lived experience. The People's Budget calls for the following:

The CPC budget puts people first. It values the common good and love for neighbor above ideology and corporate greed.