Racial wealth inequality is a major issue in the United States. It's origin dates back to the transatlantic slave trade, followed by the ratification of the 13th amendment, Jim Crow era, civil rights movement to now - the country has a painful history of white supremacy and racial prejudice with economic repercussions.

The tale of race and economics resonates strongly in New Orleans where, following Hurricane Katrina, the failure of the levies and massive flooding, more than 950 people lost their lives and hundreds of thousands more were displaced.

The racial wealth inequality in post-Katrina New Orleans reflects the inequality from pre-Katrina and explains why the African American community in particular was so vulnerable to a natural disaster and devastated by its impact.

In CFED's recent report, The Racial Wealth Divide in New Orleans, the ramifications of this displacement and the current racial wealth divide in the city are explored.

These disparities have also led to much racialized internal displacement or gentrification, where former black communities are disappearing and/or moving further and further out from the city center. (See map) 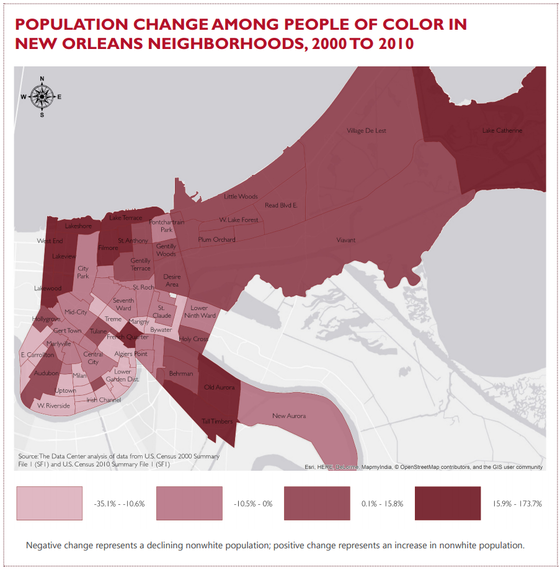 Yet, it should be noted that while the size of the black community decreased post-Katrina, there has been growth in the Latino community, and the Vietnamese community growth is relatively flat. Still Latinos and Vietnamese in New Orleans face similar economic and political challenges to that of African Americans.

In Village de L'Est, for example, the Vietnamese community had to fight to open a local school and close a landfill, after one was created in the rush to rid the city of debris, following the storm.

Gentrification and its affects are not unique to New Orleans. In the second report released by CFED this month, The Racial Wealth Divide in Miami, they found that more than 65% of Miamians of color are cost-burdened renters and less than 30% are homeowners, compared to 43% of whites.

Miami's wealth inequality, unlike New Orleans is further nuanced by its long history of immigration. Even today, 3 out 5 Miamians are foreign-born. Miami has been home to numerous immigrant groups. Most recently, there has been an influx of Central and South Americans.

Unfortunately there are great disparities among and even within racial and ethnic groups. The homeownership rate among Cubans is 36.9% compared to just 16.7% of Central Americans. Still, neither ethnic group compares to Whites that have a homeownership rate of 42.9%. In education, we see even greater disparities. Just 3.6% of Haitians have a bachelor's degree or higher compared to 7.3% for African Americans, which is then compared to 31.3% for Whites.

Although similar challenges face these cities, they differ by their magnitude and how they manifest within families and communities - it is these differences that require targeted and local interventions.

With the release of these profiles, CFED also announced their project Building High Impact Nonprofits of Color. The project's interventions rest upon this belief - those working in communities are best equipped and positioned to affect the racial wealth divide.

CFED's Racial Wealth Divide Initiative has selected ten organizations, five in New Orleans and five in Miami. In New Orleans, the selected nonprofits are: Ashe Cultural Arts Center, Jericho Road Episcopal Housing Initiative, MQVN Community Development Corporation, Puentes LatiNola and VAYLA New Orleans. In Miami the selected nonprofits are: ConnectFamilias, Hispanic Unity of Florida, Miami Children's Initiative, Partners for Self-Employment and Sant La Haitian Neighborhood Center. With the selection of these organizations and their investment, CFED's Racial Wealth Divide Initiative, in partnership with JPMorgan Chase, is making the case that to address the racial wealth divide, investments must be made in communities to organizations of color with high impact asset-building services.

There is hope. With these investments, the work of organizations, and significant policy reform we may be able to address the racial wealth divide and find ourselves in paradises that serve both tourists and their local communities of color.