They might as well have been different Star Trek planets. On one were the politicos, moneyed, and media, a kind of convention in a handful of hotel lobbies and bars, tapping at iPhones, sipping pour overs, and chatting about all the anger in the polled electorate. And how the platforms had diverged so far left and far right. How the spectacle of Trump was mesmerizing. How the spectacle of Hillary's legal inflictions less so.

The other world, down on 2nd Avenue, reflected a more-daily dispossession, bus riders in the Des Moines Greyhound/Burlington Trailways station for whom politics seems like spectator sport, of, by and for others. I was passing through town to perform for veterans at the Central Iowa VA, part of an 11-year and 110,000 Greyhound-mile tour aimed at shedding light on the struggles of fellow riders. And this was the eve of the first vote in one of the most unusual nominating battles of modern memory.

The small station with 20 people, had one emaciated older man in dark shades and a fatigue jacket, a husband and wife staring straight ahead, two drivers trading stories about how long their runs were, and the station TV was not tuned to the news, in this epicenter of the national political moment on the eve of the caucuses, but reruns of Law and Order SVU on Ion. Sure, there was Carly Fiorina in a commercial saying she's fought for America. Then, "We need a leader for these times, Mike Huckabee." But then back to Munch on SVU.

Asking people if they would caucus, the response was largely puzzlement, as though I had asked "How would you like your porterhouse?" In Iowa, as elsewhere in America, the demographics of participation are clear: The more you make, the more likely you are to be counted. The country's electoral system, its discourse, its political representation, like its campaign finance, is a weighted average in the direction of the haves, and the really-haves, over the have-far-lesses.

Despite record Republican turnout and strong Democratic, fewer than 20 percent of the eligible Iowans took part in this caucus. Few, based on the handful I spoke to traveling in-state on the eve of the caucuses, were riding the bus. This, despite the fact that Greyhound riders have seen, up close, the effects of America's two longest wars in history, waged concurrently, by many of the vets who travel by bus; the rising epidemic of addiction; the cycle of mass-incarceration and recidivism; the biggest economic cataclysm since the Great Depression; the deepening disparity in its wake; and stagnant wages across the board.

And while it's true that anger associated with financial insecurity is feeding both the right and left this election year, it seems there is a place beyond anger, a place where powerlessness makes anger feel irrelevant, such is the dissociation with the political process. There is frustration, there is anger, and then there is the resignation. The divides of this election, as seen in Des Moines, Iowa on the eve of the caucuses, are not only between left and right, between establishment and non-, but between those who are in the conversation and those who are decidedly not. 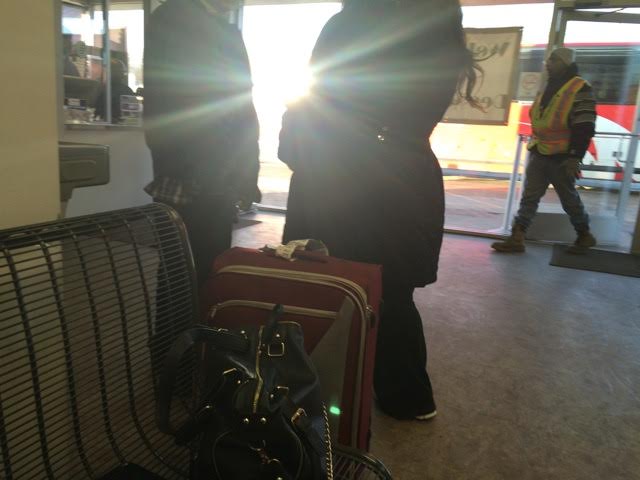