Friday morning's GDP data reveal that growth in the second quarter was a little slower than we thought -- revised down to 1% from 1.3%. With 0.4% in the first quarter, that means growth in the first half of the year amounts to about 0.7%. Recall that it takes growth at trend -- about 2.5%-to just keep unemployment from rising, and you will understand my incessant clamoring for someone to do something. Like FAST!, for example.

There's another reason for the urgency. You can also see in these data the resurgence of income and wealth inequality. There's quite a lag to the inequality data, so no one knows what the trends in income or wealth disparities look like post-2008, e.g. What with high unemployment and weak middle-class earnings, along with solid corporate profits, one assumes that after taking a hit in the downturn, wealth accumulation is "back on track" as it were. That's certainly been the pattern of the last two recessions/recoveries.

Today's data provides some evidence in support of that expectation. The first figure below shows the recent trends, up through last quarter, in corporate profits and workers' compensation as a share of GDP. 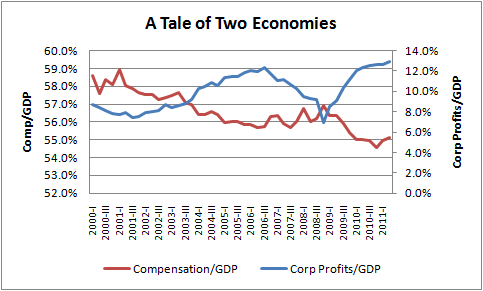 As you can see, corporate profits have not only recovered their post-recession highs, they've surpassed it. And compensation as a share of the economy is far lower. You can also compare how different these patterns look compared to last recession in 2001, when the income shifts were not nearly so sharp.

The key point remains that even at less than one percent growth, stagnant real wages, and a sharp decline in the compensation share, corporate profits have more than recovered. Clearly, these corporations are selling into emerging markets, tapping productivity gains without hiring, and trading financial instruments. Nothing inherently wrong with that, unless it's the only thing that going right in this economy. Which it kinda is.

A few weeks ago I discussed the deeply corrosive impact of such extreme wealth concentration, as it shuts down new ideas that can correct this destructive trend. And just last night, I worried that we're losing our ability to self-correct.

The image of the above figure should be viewed as a big, scary dragon of sorts, as in the next figure. And we must stop its flight before it devours what's great about America. 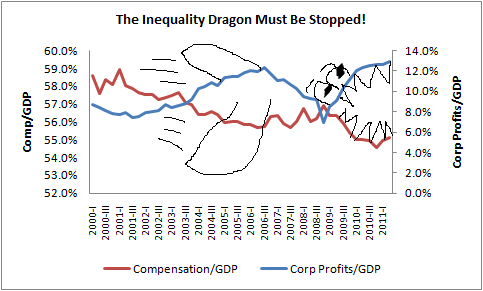