The day after the Orlando massacre, the New York Daily News and the New York Post ran front-page headlines that couldn't be more different. At the top of the Post page, a black background with these words in white letters: 'ISLAMIC TERRORIST KILLS 50.' Underneath, two headlines red-bulleted and in black letters: (1) 'Gay-club attack on our freedoms' (2) 'Worst shooting in nation's history.' And taking up the lower half of the page in giant red letters: 'ISIS VS. US.' 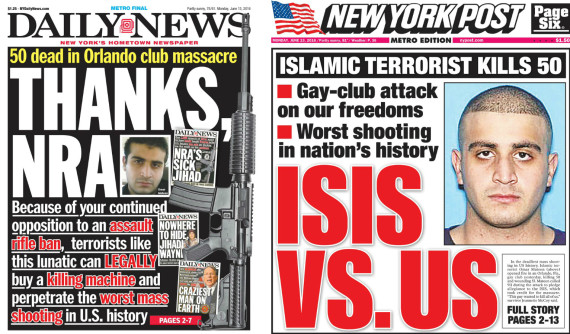 The front page of the Daily News featured a headline in yellow letters against a black background: '50 dead in Orlando club massacre.' Underneath the headline and taking up the rest of the page is a mini-essay in the form of a sarcastic and taunting thank-you note, in white letters with some words highlighted in red: 'THANKS NRA. Because of your continued opposition to an assault rifle ban, terrorists like this lunatic can LEGALLY buy a killing machine and perpetrate the worst mass shooting in U.S. history.'

To say that the two newspapers had different axes to grind would be an understatement. The Post foregrounds Islam and ISIS and unites them with the word "terrorist." The attack is not on club-goers in Orlando, but on the U.S. The gay part of the scene is briefly acknowledged but is quickly absorbed into "our freedoms."

The Daily News front page doesn't even mention gays. Nor does it reference Islam or ISIS. Its editors just want to indict the NRA for creating the conditions that (in their view) made the crime possible and even inevitable. This is sociological-cultural analysis rather than reporting.

So in one newspaper, another chapter in the deadly war being waged on us by Islam. In the other, more evidence of political bankruptcy and cowardice in the face of a lobby of gun fanatics.

So what's the truth of the matter and how might we determine it? It's tempting to say that if we put all the accounts offered by the media together, we would have something like the complete story. But then someone will object (correctly) that you can't just lay competing accounts side-by-side, for that implies that all of them have an equal weight; and that can't be so; some factors must be more significant than some others. Once that point is made, an argument about which ones are in fact more significant will break out immediately, and the apparently intractable dispute will begin all over again.

Can't we end the argument by setting the competing accounts next to the facts and letting the facts decide which account of them is correct? This is an age-old dream of those who want to short-circuit bias and distortion, but it depends on being able to identify the facts apart from any disputes about them; if were able to do that, arguments could be settled almost mechanically. Unfortunately, facts are what emerge from argument; they do not precede it, and so there is no set of argument-independent facts that could compel assent from everyone and end the debate once and for all.

But what about the fact that 49 died and more than 50 were injured in an event that occurred in Orlando, Florida? No one doubts these facts; aren't they universally compelling? Well, no one I know doubts them, just as no one I know believes that Elvis lives, that the Holocaust didn't happen, that we didn't land a man on the moon, that LBJ killed JFK, that 9/11 was an inside job, or that the earth is flat. Yet millions of people do believe these things and believe them in the face of the evidence brandished so triumphantly by clear-eyed observers of fact. What do you say about those millions?

Well you could say that they are crazy because any sane person would yield to the obvious facts. But that's just name-calling and a refusal to acknowledge that those who hold views we consider bizarre have reasons for what they believe and are able to cite evidence in support of their reasons and deduce from those reasons facts they regard as indisputable. Of course it is not evidence that we in the mainstream credit or reasons that we find reasonable, or facts that we acknowledge. But that just means that "we" and "they" are coming from different places and the gap between us cannot be bridged by facts that come from nowhere and are just there. There is nothing to prevent someone from putting forward an account of the events in Orlando that denies that they ever happened and attributes a belief in the "standard account" to a conspiracy of gay activists abetted by a media that supports them. Probably won't happen, but it could happen and nothing in nature or the nature of fact could stop it in its tracks.

Daniel Patrick Moynihan famously said, "You are entitled to your own opinions, but you are not entitled to your own facts." But you are if you can embed them in a story that is persuasive to at least a significant number of people, for it is in the crucible of persuasive efforts that facts are fashioned (and dislodged). No facts before argument. Indeed, without argument there are no facts. And that's a fact.

This column is an extension of my new book (to be published July 5), Winning Arguments: What Works and Doesn't Work in Politics, the Bedroom, the Courtroom and the Classroom.